Take a good look at that prediction percentage, because it would be the lowest we had all contest and the lowest outright since the latter matches in Spring 2004 involving Starcraft and SSBM. Only Diablo > Kefka really came close to this match in terms of bracket busters in that time frame.

Though it's somewhat difficult to figure out why. Either people overestimated the hell out of characters like Magus and Dante (and thus had them winning this match), or those who were smart enough to pick a Vincent/Squall match had Squall winning. I suppose this was feasible, given that Squall was a main character and that Vincent was optional in FF7. But on GameFAQs, when has FF7 vs FF8 ever turned out well for FF8? Worse yet for Squall is that Vincent was the clear favorite to win this match through extrapolation of Dante and Knuckles. One could assume that for Squall to win this that he would have to net a degree of rSFF on a Final Fantasy 7 character, which made his hopes look quite dim.

And when the poll opened, it looked like Vincent was going to roll all over Squall in the match. Not necessarily because he was building a large lead, but because Vincent was up by nearly 200 votes after an hour and (to my knowledge) a comeback has never occurred in an SFF duel.

But Squall soon went out and proved all of his doubters wrong in a damn big way. Not only was he able to stall Vincent after that first hour, but he was able to start taking votes back. After the two characters were stuck in gridlock for another two and half hours fighting over Vincent's ~150 vote lead, the fight was on. As obvious a favorite as Vincent was in this thing, Squall wasn't about to let Vincent run away with this match quietly into the night regardless of how crappy his match pic was.

After the two characters were stuck between 100-200 votes all morning long, the morning vote hit. And Squall caught it big time. Not only was he finally able to get Vincent under 100 votes, but the match was tied just over 30 minutes later. Squall then began using his morning vote powers to begin building a slight lead on Vincent despite all of Vincent's best attempts at keeping Squall down, and for awhile it seemed as if Squall would catch the full force of the morning vote and put the match away. But this would only last for a split second, because Vincent would soon stall Squall's advance. After nearly an hour of seeing Squall stuck with a lead of between 50-80 votes, Vincent took all of it away and regained the lead in a mere ten minutes. The two characters remained deadlocked for almost another hour before two more spikes in Vincent's vote intake put him up by over 100 votes. Squall tried his absolute damnedest to hold Vincent off from pulling away, but Vincent was able to extend his lead to over 200 after a long and epic struggle. Then another epic followed that saw Vincent expend everything he had into getting the lead over 300.

Squall somewhat gave up at this point, as Vincent was able to get the lead from 300 to 400 in a matter of 15 minutes. But Squall had one final stand in him, yet the best he was able to do was to hold Vincent around the range of 400 before Vincent took flight with the second night vote to win by 1150.

Do not let the relatively wide margin of victory fool you, because this was arguably the closest match of the entire contest. Vincent was the clear favorite, yet Squall gave absolutely everything he had out there. He simply fell just short under the weight of all that was against him. Not only was Squall going up against FF7 in an FF7/FF8 clash, he was up against his own demons as well. Squall gets anti-voted in every match he's in, and this was the first case in which said anti-votes probably managed to cost Squall a match. And while virtually any factor can be postulated and validated in a close match, I think that a slight touch of SFF and the anti-votes are what held Squall back the most from winning the match. But regardless of Squall's loss, he damn sure validated his strength in this contest, plus he'll have Kingdom Hearts 2 to work off of next year.

As for Vincent, this was a Pyrrhic Victory if there ever was one. He won the battle, but lost the war by a grand amount. As if his underperformance on Dante wasn't enough to prove his overestimation, this all but sealed it; if Vincent weren't able to gain a large degree of SFF on an FF8 character awhile being the fan favorite from FF7, his chances of beating Crono were absolutely zero. But despite all this, one can't deny that these two characters gave us arguably the best match of the entire contest. It's a pity it didn't go down to the wire, because a lack of photo finishes was the one thing this contest was lacking in. 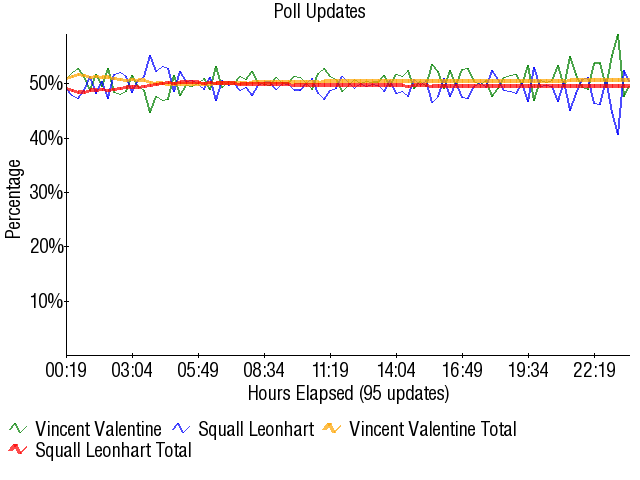 It’s so funny how almost everybody underestimated Vincent. Magus was seen as the lock to get out of the aptly-named Devil Division, and some people had faith in Squall or Dante to get the job done instead. But apart from an unusually correct Heroic Mario, few had confidence in the future Noble Nine breaker to make it out of the division alive (and some even had him losing to Sarah Kerrigan in Round One! My, how delicious hindsight is).

But Vincent proved all his haters wrong in this tight match, one of the closest of the whole 2005 contest. These two Final Fantasy fan favorites (try saying that three times fast) gave it all they had in a very good, intense match, and in the end Vincent walked away the winner, with one of the lowest prediction percentages in contest history.

Retrieved from "https://board8.fandom.com/wiki/(5)Vincent_Valentine_vs_(2)Squall_Leonhart_2005?oldid=56130"
Community content is available under CC-BY-SA unless otherwise noted.