AntiBlowoutFAQs was mostly a fad before this match, but it became legitimate once this happened. Claptrap was one of those "who the hell is this guy" characters when the bracket came out, and people were expecting complete murder here. As it would turn out, Claptrap is from some cel-shaded game called Bored-erlands and acts like the robotic version of Navi in it. Basically, no one likes him.

Given Zidane's weak contest history, expecting him to make Claptrap the next Tanner was asking a bit much. But expecting a huge blowout was still reasonable, especially given this was a night match and Zidane would have the full benefit of the Square overnight vote. He started off well enough, then dropped like a rock down to 63%. The overnight vote got him back up close to his final percentage, but it didn't prevent the criticism. Zidane > Ike was a hyped upset pick, but the hype died off once Zidane laid an egg here, especially given upsetting Ike in a day match would be hard enough as is.

So naturally, Ike went out and laid an even bigger egg next match. That's just how this contest rolled. 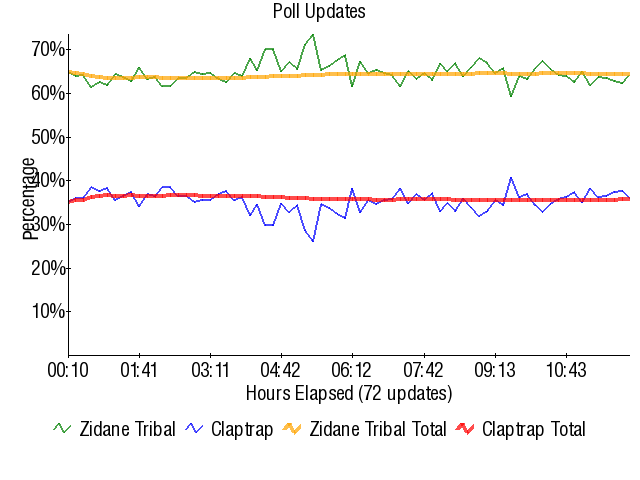 • Previous Match       • Next Match
Retrieved from "https://board8.fandom.com/wiki/(5)Zidane_Tribal_vs_(12)Claptrap_2010?oldid=62570"
Community content is available under CC-BY-SA unless otherwise noted.