This contest was bound to have a match or two definitively decided by time of day, and this was perhaps the big offender. Zidane and Ike were clearly pretty close following their joint round 1 stinkbombs, but no one had faith in Zidane pulling the upset because of this being a day match.

Sure enough, the match was a potential classic for 30 minutes, including Zidane winning an update by 46 votes. But before long, the day match trends kicked in and Ike was able to score a close, hard-fought win. It's a match winner we can definitely attribute to the format. Zidane flat-out dominates at night, and Ike does the same during the day. If this were a night match, you could safely assume the numbers are switched.

The true fun is thinking about what happens if this were a 24 hour match, but we're likely not to see those for awhile. Ike followed up his first win ever with a tough round 2 win, while Zidane is still looking for his first-ever round 3 appearance. Maybe next year, we'll get a rematch at night to even things up here. 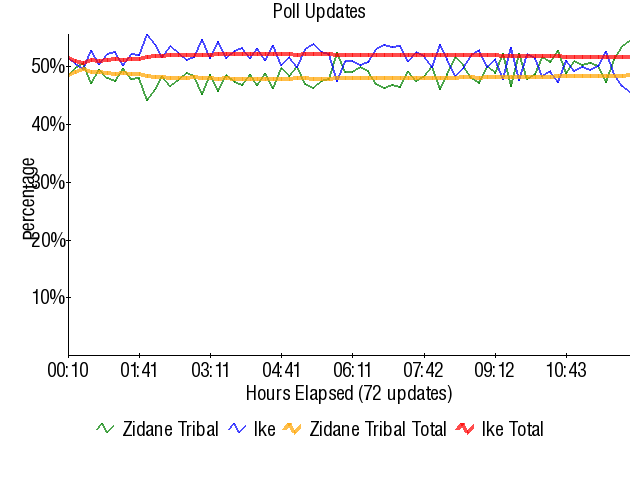 • Previous Match       • Next Match
Retrieved from "https://board8.fandom.com/wiki/(5)Zidane_Tribal_vs_(4)Ike_2010?oldid=59211"
Community content is available under CC-BY-SA unless otherwise noted.