When the Summer 2005 bracket was released to the board, this match-up was probably one of the most debated matches in the entire contest. Especially to the supporters of the x-stats. Alucard is ranked above Sora in the x-stats and was expected to beat Sora with 51.38% of the votes. Alucard would have to be the favorite in a match-up with Sora right? I mean, who really cares about the goofy clown-shoed kid from Kingdom Hearts? I mean sure Sora performed well in 2k4, handily taking care of Ryu Hayabusa before bowing out respectfully to Samus. But there’s a huge difference between performing well on Samus and defeating Alucard, right? Besides, with Alucard’s plan in effect, there’s no possible way that he could lose to Sora, right?

Yeah. Right. Like the many close matches by x-stats standards that we’ve seen before, you couldn’t possibly have relied on the x-stats to call this match. Like Vivi/Zelda, Luigi/KOS-MOS, and Ganon/Auron before it, this match completely pissed on the x-stats. There was no doubt in my mind whatsoever that Sora was going to take this match with ease.

Alucard has performed pretty respectably in these contests, having wins over the likes of Tails and Kirby, and bowing out to the likes of Cloud, Sephiroth, and Ganondorf. Sora doesn’t have as much contest experience as Alucard, but he did have a nice 2k4 as mentioned before. HOWEVER, when it came to a direct match-up between the two, the writing was on the wall for who would be winning this match.

First of all, you have to look at the games that the characters come from, and the popularity trends of said games. Alucard hails from Castlevania: Symphony of the Night. Now SOTN is a very popular game on the Playstation, and is widely heralded. But the game isn’t getting any more popular as time marches on. And Alucard hasn’t done squat since his appearance in SOTN besides a cameo in Castlevania: Aria of Sorrow on the GBA. And he wasn’t even referred to as Alucard in that game.

Kingdom Hearts, on the other hand, is on an upswing in popularity. Not only did Sora have a GBA appearance with KH:CoM, but there is also much anticipation for Kingdom Hearts 2. PLUS, Sora had a new redesigned look that is much more appealing than his KH look. Plus you have to add to the fact that Kingdom Hearts pretty much IS Final Fantasy XI as far as popularity goes. Seriously, place 16-year-old Sora next to Cloud, Squall, Zidane, and Tidus. Doesn’t he fit right in as your typical FF protagonist?

So we finally get down to the match, and what happens? Alucard jumps to an early 53% lead with the board vote, but he was only able to build his lead to a peak of a whopping 68 votes before Sora began to slice into the lead. And as we all know, Alucard’s best time is with the night vote as he is absolutely horrible with the day vote. It must be the vampire blood within him. We all knew what would happen once the day vote came. With Sora already taking a 1000 vote lead throughout the night, he absolutely EXPLODED upon the arrival of the morning vote and ultimately ended up beating Alucard’s ass by more than 10000 votes.

Now, you could have only looked at the previous results of this contest and known that Sora was going to take the match. Sora performed respectably against Agent 47, even though many people considered him to be Neo-Tanner. However, that was just due to his looks. Hitman is a very popular series, and Agent 47 is much more appealing than Tanner. However, Alucard absolutely CHOKED in his match against Kratos, of God of War fame. If Alucard was having trouble with Kratos, there’s no way he should have been able to handle Sora, right?

As far as the low prediction percentage? Sora had over 80% of the brackets getting him to his matchup with the Alucard/Kratos winner. So it appears that many people took Alucard and possibly Kratos over Sora. The reason for that? “And all the people say LOL X-STATS! And all my ladies say LOL X-STATS! And all the fellas say LOL X-STATS!” Plus it seems that Sora doesn’t get much respect on GameFAQs. And judging by his match-up with Snake and the horrendous picture disadvantage that he got, it seems like that trend continues. Of course, that could just be chalked up to Alucard’s plan…<_< 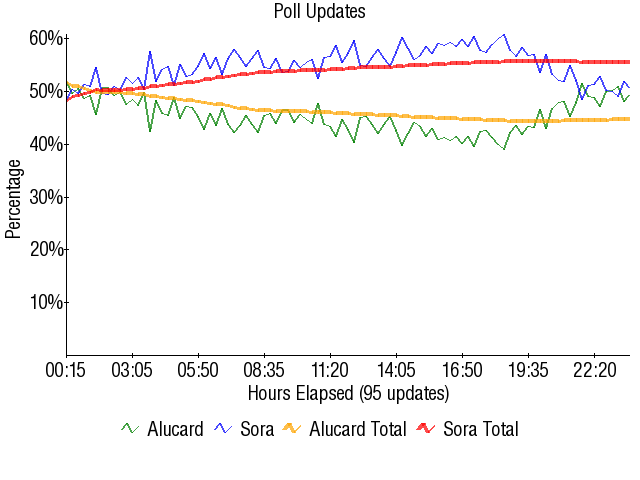 Retrieved from "https://board8.fandom.com/wiki/(6)Alucard_vs_(2)Sora_2005?oldid=56098"
Community content is available under CC-BY-SA unless otherwise noted.