"Someone explain this concept of 'Noble Nine' to me again. I think it means not choking against a C-Grade Square character, but I could be mistaken." -Amazing Telephone

The above result shows a win for Solid Snake, but it also shows Solid Snake being the single biggest flop of this entire contest. In 2002, Snake was expected to take down Crono. It was a shock that he lost, but at least he went out respectfully. He was expected to go down against Mega Man in 2003, but once again, at least he went down respectfully.

But what Snake did in this match was simply inexcuseable, even though he won. The assumption that Snake had gone down after he failed to break 60% on Knuckles didn't seem like much, but denying a Snake drop after this debacle is nothing short of ignorant. Not only did Snake let Frog hang around in the beginning of the poll, but Frog actually took the early lead in the poll on Snake. Snake managed to come back with ease, but not before Frog went toe-to-toe with Snake through the first 1000 votes of the match. Snake eventually managed to break away from Frog and build a lead of over 3000 votes throughout the day, but just when Solid Snake was about to regain his respect, the evening vote came. Not only was Frog able to use the evening vote to his advantage, but Frog began a steady momentum that carried all the way until the end of the poll. Frog took a lead of over 3000 and brought it down to 2400 before all was said and done again a character who was elite material. Solid Snake will certainly return to his elite status, but not until after Metal Gear Solid 3.

And yes, I'm aware that there was a certain degree of the Solid BLEEP Factor going on here, but take a look at a fun fact. Frog faced Liquid Snake, Solid Snake, and Master Chief in this contest. Of those three characters, Solid Snake performed the worst against Frog in the final six hours of the poll. Liquid Snake performed better than Solid in the final six hours of the poll. No amount of Solid Shit can possibly explain that; there was something else going on here. There are any one of a hundred different explanations, and to be honest, your guess is as good as mine. When a character performs better on Solid Snake in the final six hours than he did against his two previous opponents, it's nearly inexplicable.

Rather than attacking either character in this match, I'm going after something else. This isn't to say that the characters don't deserve some attention, but again, I have no clue why Frog performed the way he did. There may have been cheating, it may have been the SS Factor, it may have even been Snake not having a decent game since 2002 (Twin Snakes and its 200,000 copies =/= decent), or it may have been that these characters truly are as strong (or weak) as this match suggests.

Instead, this is the perfect time to attack the extrapolated standings. We all love them. We all use them. But what happens when the standings go berserk? How do you explain Ryu Hayabusa vs Sora, Frog vs Snake, or even lesser matches that skewed the standings like Tidus vs Mega Man or Ganondorf vs Alucard? The only explanations I have ever seen in these cases involve various degrees of SFF or margin of error. The fact of the matter is that even though the Xsts are a great reference point, the people that follow them to the letter will likely find themselves surprised somewher down the line. And despite this, the same excuses are still used when something goes wrong. Sora may have suffered SFF against Aeris, but his match with Ryu H suggests that he would outright defeat Aeris in a non-SFF matchup. Something is amiss here.

The issue with the Xsts is that they assume linear transitivity among voters. Unfortunately, even though we as humans tend to vote in patterns, we are not mindless drones programmed to vote a certain way in every match. CATS may have gotten 12% on Link, but I firmly believe that nearly every character in the field could score 80% or better on CATS. Dance Dance Revolution may have scored nearly 25% on Final Fantasy Tactics, but that doesn't mean that it would do much better against any other game. Each poll has a life of its own, regardless of trends. I firmly believe this. The stats can only tell you so much, and to be honest, the constant stream of "Character X WILL score xx.xx% on Character Y" posts annoy me. Projections are one thing, but using the Xsts as the friggen bible is something else. I can already see the "Tidus took a massive drop in 2004, therefore he can only score xx.xx% on characters X, Y, and Z in 2005" posts next summer.

The Xsts are a guideline. A very broad guideline. They're usually good in their projections, and I use them as much as anything else, but nothing annoys me more than all of the OMFG TEH XSTS WERE TEH WRONG!1!! crap that comes after every surprising match. Those standings aren't the bible, and there will be cases of them being wrong in every contest. But people, there is nothing wrong with this. I enjoy picking apart the numbers as much as anyone, but there come times when you're allowed to do nothing more than sit back and enjoy a match. That's what was so amazing about the 2002 contest. There were no stats, no projections, no past results.... nothing. Just a bunch of people on Board 8 rooting for their favorites. It was pure back then. Nowadays, people get upset when their projections are off by the slightest percentage. This isn't necessarily wrong, but it practically guarantees that we will never have a contest as fun as 2002.

Back to Frog vs Snake. Frog shocked the hell out of everyone in this match, despite his loss. Can't we sit and marvel at the numbers that are there rather than the numbers that were "supposed" to be there? Xsts and projections and all of that other mumbo jumbo are a real buzzkill to matches like this. 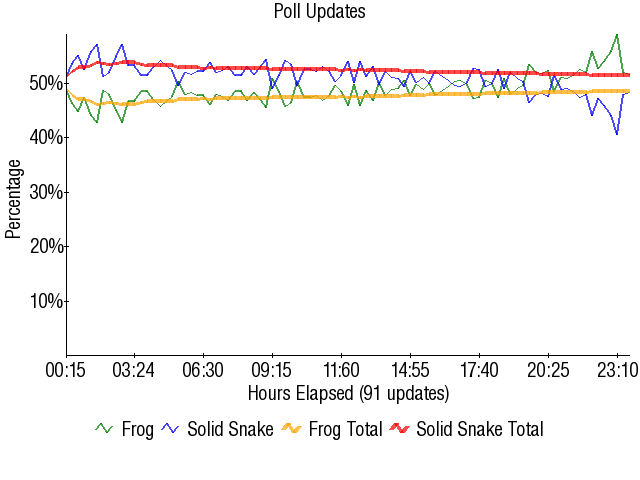 Retrieved from "https://board8.fandom.com/wiki/(6)Frog_vs_(2)Solid_Snake_2004?oldid=55888"
Community content is available under CC-BY-SA unless otherwise noted.