After the historic Knuckles upset, a large Knuckles > Squall bandwagon began to take form. These bandwagons always form after upsets, and they always form for the same reason every time: people don't want to believe that the character they put so much faith in was as weak as their loss suggested. The Master Hand > Robotnik bandwagon was another great example, because a ton of people on Board 8 had Kuja winning the fourpack.

The interesting thing about the Knuckles > Squall bandwagon however was that Knuckles actually had a decent chance of winning. All he had to do was hope that Magus was actually as strong as the stats suggested.

However, this... was put to rest rather quickly. The "bandwagon" votes put Knuckles ahead by a few votes early on, but Squall was quickly able to recover and begin building a lead. He actually soared over 57% at one point, and though the famous Knuckles day vote kicked in at the expected time, it did not deter Squall from increasing his lead. He had built a lead of almost 2000 votes come 8:00 AM EST, and though Knuckles was able to cut into Squall's percentage come showtime, Squall was easily able to increase his lead and stem any talk of a Knuckles comeback. Knuckles' percentage slice was impressive in that he was able to bring Squall down from being over 57% to what you see above, but he did very little about Squall's lead increase. The best Knuckles was able to do was to either go 50-50 with Squall or win a few small updates every now and then. By the end of the match, Squall would end up winning by over 7500 votes. Pretty impressive, given that some expected the upset.

The first thing that this meant was that Magus was absolutely confirmed to be an overrated bust. If the 2003/2004 stats were accurate on Magus, Knuckles would have won this match. Instead, he lost by over 7500 votes. All the people that somehow felt that Magus was fluked out of winning that first round match... pretty much had to shut up by this point.

Secondly, Squall meant business in the Devil Division. Unfortunately, given how remarkably consistent Vincent had been in his first two matches, the clear advantage went to him in the divisional finals. Compare and contrast the second round matches between Vincent and Squall:

And given that Dante has traditionally been stronger than Knuckles in these contests, one would have to assume that Squall was at a disadvantage going into the Devil finals. If Dante > Knuckles, yet Squall scored a lower percentage against the weaker character....

Squall's only real chance against Vincent was to hope to be the beneficiary of the SFF and the bracket votes. He likely had the bracket votes going in, but even if it was FF8 Lead versus FF7 Optional, FF7 vs FF8 never turns out well for FF8. 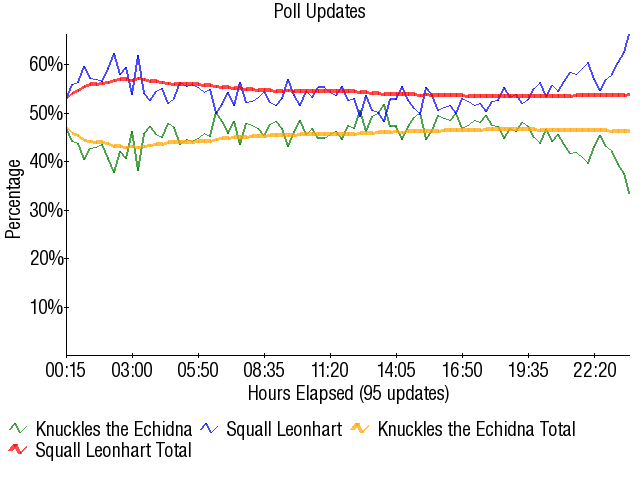 Retrieved from "https://board8.fandom.com/wiki/(6)Knuckles_the_Echidna_vs_(2)Squall_Leonhart_2005?oldid=56110"
Community content is available under CC-BY-SA unless otherwise noted.