After Albedo/Bison and Ridley/Diablo, the board essentially made Bison their chosen son. Plenty of people around here are fighting game fanatics, and plenty of people were still somewhat bitter over Ridley's loss. Many people had Ridley in the Final Four, and this soon translated into Bison being guaranteed the board vote against Diablo in the match. That's one advantage. Two, there was the match pic. During sprite rounds with video game backgrounds, CJayC gives "home field advantage" to the higher seed. Bison was the higher seed, and thus, we saw a match pic with a Street Fighter 2 background, an Alpha Bison, and a Diablo randomly plugged in out of nowhere. That's another advantage for Bison. Lastly, and most importantly, it was extremely difficult to think that Bison would be weaker than Ridley. It was obvious that Bison would give Diablo a good match, and aside from consolefreak's proof, it was almost impossible to know which way the match would go. You were either rooting for M. Bison or Diablo, and gave random reasons why you thought each character would win; however, it was impossible to know for sure what would happen.

When the match first began, Bison got the board vote as expected and started off on fire. However, Diablo quickly recovered and prevented Bison from ever having a vote lead above double digits. Bison tried to break 100 many times in the first hour, and even managed to stave off a massive comeback push from Diablo in the process, but the two characters were essentially deadlocked early on. After the first hour of the poll ended, Bison had a mere lead of 100 votes, but due to what Diablo was able to do against Ridley as well as the wild card known as diabloii.net, it was still anybody's match. Bison made a push soon after this to extend his lead to 150, but that's the best lead he was able to manage throughout the entire match. Diablo began to come back in the match practically the second after Bison took a lead of 150, and though Bison tried his damndest to hold Diablo off in those early morning hours, Diablo was able to catch the morning vote, then tie the match and begin building a lead of his own. Bison tried his best to stall Diablo many times, but the best he was able to manage during the morning vote was just that: stalling. He was never able to truly cut into Diablo's lead, and though Diablo was stalled many times as the morning hours wore on, Diablo was still able to slowly build his lead up to the 1000 vote barrier.

However, Bison was not quite done yet. When the morning vote began, it was Bison, not Diablo, that was the beneficiary. He began to come back extremely slowly at first, and it was so subtle that practically no one noticed what was going on. However, when Bison was able to trim Diablo's lead down to 900 with relative speed and momentum behind him, everyone started taking notice of the fact that we finally had a match on our hands. It only took Bison just under 25 minutes to bring Diabo's lead from 1000 to 900, and he wasn't done yet. He continued his Psycho Crusher assault of Diablo, but like the true devil that Diablo is, he wasn't going to simply let Bison have his way. Bison continued cutting into Diablo's lead, however Diablo began to make it far harder on Bison than when Bison first began his comeback efforts. The two characters seemed to be stuck at around the 850 vote barrier forever, until Bison finally went on a massive push to bring the lead to under 800 votes.

Diablo seemed to be out of gas at this point, because as soon as his lead was taken down to the 800 mark, it barely took Bison any time at all to slice another 100 votes off of the lead. Bison mania began taking over the board, while there was clear concern coming from Diablo's corner. As if possessed by the Soul Stone itself, Bison continued beating the hell out of Diablo with a relentless assault, and in no time flat, the lead was all the way down to 660.

However, as amazing and fast as Bison's comeback attempt was, Diablo's recovery was even better. Diablo began to receive votes as if every Diablo fan on the planet knew he was in trouble, and within a few minutes, Diablo began to turn the tables in the match. If you blinked, you probably missed how fast the turnaround truly was. Diablo, much like Master Hand not too far before him, absolutely caught fire when the after school vote began. At one point before the after school vote, Diablo's lead was 660. One hour later, after the after school vote fully decided who to favor, Diablo's lead was over twelve. hundred. votes. It's as if Diablo was toying with Bison before sending him down into the flames of hell, and before long, the match got completely out of hand. Diablo began beating the absolute hell out of Bison, and it wasn't until Diablo's lead was well over 4700 votes did Bison decide to make any sort of attempt at saving face. By by then, it was too little, too late, and even that push was quickly slapped aside by the Satan spinoff. It was yet another close match that turned into a laughingstock, and it made consolefreak look like an absolute genius.

There's little to no proof of how or why Diablo was able to catch fire so quickly right in the middle of a heated poll, so I won't even bother trying to explain it. I will simply conclude this by saying that this wonderful match knocked this guy off of his coveted #1 spot on the leaderboard...

I will win the competition and my score will be perfect.

And how many points do you have, again?

...and the entire board absolutely laughed their ****ing asses off afterwards. There's nothing quite like watching a self pwning to such a high degree, even if the guy probably was an alt account whose bracket was ineligible. 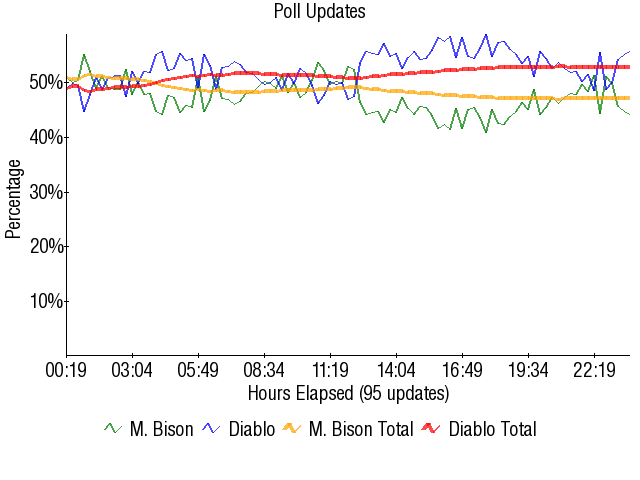 They didn’t call it the Ruin Division for nothing. The villains bracket’s most crazy division featured Kefka as a weak 1-seed and an early matchup between Ridley and Diablo, with a second-round matchup between the winner of that and M. Bison (or, if you were me and stupid, Albedo). Diablo beating Ridley was a huge upset in and of itself, but his match with Bison in Round 2 was even more heated.

This match saw lots of lead changes and crazy voting patterns, and after a tough showdown Diablo eventually took home the gold, making Blizzard 2 for 2 on crazy Cinderella runs (Starcraft being the first in the games contest). The only satisfying bit of this for the majority of the board (who had either Ridley or Bison advancing) was watching a troll named Fedor lose his perfect bracket after bragging every which way about it. Hochiminh, take notes.

Retrieved from "https://board8.fandom.com/wiki/(6)M._Bison_vs_(7)Diablo_2005?oldid=67774"
Community content is available under CC-BY-SA unless otherwise noted.