This was a very debated match pre-contest, which I never really understood. People make the biggest deal out of 1 point matches, when the late rounds mean the most. Even if Catherine pulled the upset, Samus gets to annihilate Catherine instead of Neku. Woohoo.

That being said, matches where anyone could potentially win are always the most fun to talk about. the case for Neku was that he already went through his contest lumps, and was being given a fodder match that he was destined to win, similar to how Laharl was fed to Vyse, Neku was fed to Laharl, and so on. this stuff is conveniently in every bracket.

Catherine was the most intriguing option here, which is why I chose her. I figured if Laharl could beat Neku, why couldn't Catherine? She was bound to have a huge picture advantage, and her game selling 500,000 copies at launch far exceeded any expectations Atlus could have hoped to have. It isn't enough to beat even midcarders, but fodder trash like Neku and Vaas? Surely a character with a cult following could beat that.

And that is exactly how this match would play out, almost to the letter. Vaas went down early and was never in it, but Neku and Catherine had an absolutely amazing match until the evening vote hit. Neku took a very slim early lead, but was beaten down when he tried pulling away for the win. Then Catherine took a slim lead, and was also beaten down every time she tried pulling away for the win. The margin was never more than 100 votes for the first six hours of this poll, and then Catherine stormed up by 115 and made this look over.

Then out of nowhere, Neku tied the poll before completely choking. I don't know if Catherine was rallied or Neku ran out of steam or what, but this poll was tied 7 hours in, and then Catherine beat face for the last 5 hours to pull off a 600 vote win. These are the types of things that happen when people only really care about one character in a fodder poll, and she really deserved to win this.

Catherine is a really good game, though I'd be lying if I credited her game instead of her, erm.... assets, for winning this match. I'm sure she won because this game is every otaku nerd's fantasy dream, even though guys like me are the ones actually having crazy relationships with girls like that in real life.

For the betas out there who have no experience with this, a word of advice: never see a crazy girl for longer than a month, no matter how good the sex is early in a relationship. No amount of good sex will ever outlast how truly insane a crazy girl can get, and the cutoff is usually a few months. Just get in there for a month and then get the hell out. And never, ever cheat on a girl you're with with a "crazy girl". I know I say all women are crazy, but there are levels to it and you never want a side piece girl you're cheating on to be crazier than the girl you're with.

Not that I condone cheating, for the record, but there's also nothing wrong with getting out there and living it up a little. Just know what you're dealing with and how to get out early is all.

oh man, I forgot how much effort I put into Catherine's pic here. It took me forever to render out those drills nicely. i wish i put that much effort into my day-to-day life.

This was another case of "which obscure Japanese character will win and how will the face of a popular western game do comparatively?"

A lot of people took Vaas here for the same reason they took Booker and Lee. That was a bad idea. We're probably not going to see Joel and Ellie in these contests now because all new-age Western characters have been exposed as worthless. I hope I eat those words, though. I want a contest completely opposite of this one to keep us on our toes.

Neku had lost to Laharl once, and there were very few people who thought Catherine could be much stronger than Laharl, especially after K/Catherine only barely managed to avoid getting tripled by Sonic/Eggman. Catherine sold pretty well though and people love it on this board and site in general. It was even played at EVO for a while:

So was this result really that surprising? Yes, kind of, Neku was the safer pick for sure, but in retrospect it seems obvious, and at the time people had very little faith in what was seen as niche Japanese fodder.

Also I wanna call back to one of my fave pics ever, my Catherine Rivalry Rumble pic: 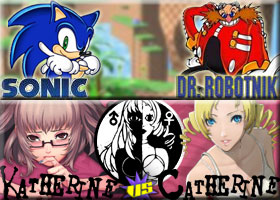 Catherine is getting an HD remake this year, I encourage anyone who hasn't played it to give it a shot.

Retrieved from "https://board8.fandom.com/wiki/(6)Neku_Sakuraba_vs_(13)Vaas_Montenegro_vs_(22)Catherine_2013?oldid=82167"
Community content is available under CC-BY-SA unless otherwise noted.