Jack Black might have done better than this. Even in AntiBlowoutFAQs, this contest still had some laughably terrible performances. Eddie Riggs was one of them.

There is not one single poll on there -- not ONE -- where Ratchet was anything but total crap. And before saying that 2007 PS3 poll is relevant, check out pre-Uncharted 2 Nathan Drake getting almost tripled by CATS: http://www.gamefaqs.com/poll/index.html?poll=3265

Until Eddie Riggs showed up, Ratchet was complete fodder. But once again, we're shown how most characters can look like gods in the right circumstance. Stick Ratchet against Guybrush Threepwood and he probably breaks 90%. Eddie Riggs is lucky this poll wasn't 70-30 or something, and it came close for awhile, but his big role here was finally getting Ratchet off the winless characters list. It took 7 long years, but he finally pulled through.

As a total aside, Tim Schafer is one of the most overrated people out there. 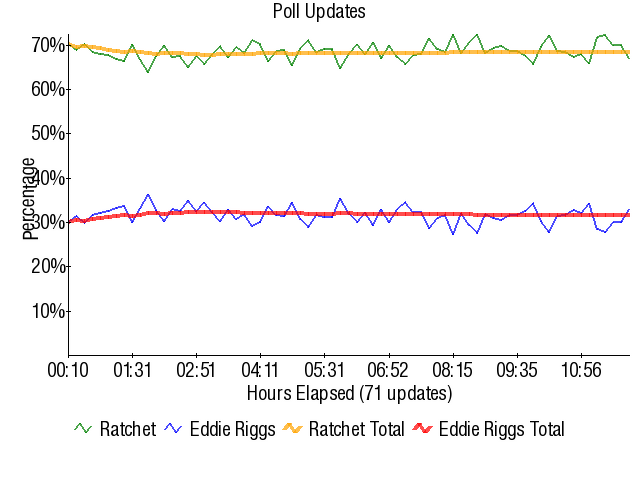 • Previous Match       • Next Match
Retrieved from "https://board8.fandom.com/wiki/(6)Ratchet_vs_(11)Eddie_Riggs_2010?oldid=61193"
Community content is available under CC-BY-SA unless otherwise noted.