Kratos Aurion was far and away the guru favorite here, yet it ended up being one of those matches where the casuals embarrassed the experts. Kratos was never in this match, and only did well when the Super Bowl was on. The trend graph for this is hilarious, because you see Sackboy doing well, then he drops off a lot during the Super Bowl before going back up again. It graphically shows the disconnect between casual and hardcore gamers. The stereotype is casual gamers are more likely to be normal, functional people into sports, girls and whatever else the popular guys like these days, while hardcore gamers are the otaku neckbeards who live in their mom's basement and live off their parents income until roughly the age of 30. Both sides of that coin can be rather dumb, but the point here is how it's right on a graph. The proof is right there: hardcore gamers don't like sports as much, and even the ones that do were probably watching the Super Bowl at home. Take from this what you will.

There are two other major points about this match. One, it's clear LittleBigPlanet has suffered from always being in polls with Metal Gear Solid 4. It finally got the chance to be in a poll alone, and did really well. Secondly, it's time to stop nominating Tales of Symphonia characters. None of them have ever amounted to anything, and ironically the only one likely to have any strength is Kratos himself. So nominate Kratos until he wins. Everyone else can go away, especially those who keep popping in from other games in the series. 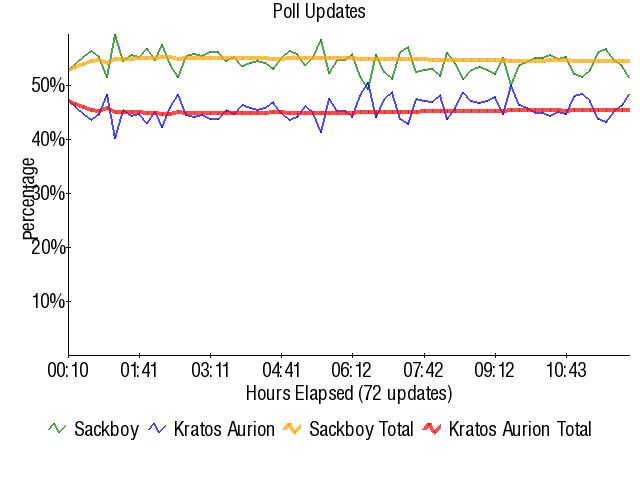 • Previous Match       • Next Match
Retrieved from "https://board8.fandom.com/wiki/(6)Sackboy_vs_(11)Kratos_Aurion_2010?oldid=59183"
Community content is available under CC-BY-SA unless otherwise noted.