The match between Ryu Hayabusa and Jill Valentine was widely believed to be a 3-point match, simply because Jill Valentine finished so far ahead of Sora in the 2003 Xsts. Considering how the first round went, there was little reason to believe that Hayabusa wasn't going to own this match. Sora had a decent match against HK-47, but because HK-47 wasn't in the contest last year, there was no way to prove that Sora was any stronger than he was in 2003. And because Ryu Hayabusa managed to beat Jill Valentine, there was no proof that he wouldn't simply take Sora down with ease.

But as this match began, it was clear that this match would wind up being the single biggest surprise of the contest. Not only did Sora beat the hell out of Ryu, but Ryu was never in the match in the first place. He began a 60-40 beatdown at the beginning, and never let up until the end of the match. The match itself was never in any real doubt, but most expected it to go like this in favor of Ryu, not Sora. Sora wound up performing so well that after this match, 2004 Sora would be projected to defeat 2003 Aeris, despite the fact that Aeris doubled him up last year. No character had a larger weighted gain than Sora this year, and it was all because of this match. And while we had our fair share of OMG WTF SORA IS TEH WINNAR?!?!1!!?1!1 topics, it was no true surprise that Sora won the match to most people despite how favored Hayabusa was by the board.

Everyone knows who Sora is, plain and simple. He stars in a game that has sold well over 4 million copies already, and a game that has the Square tag. Ryu Hayabusa starred in the original Ninja Gaiden games in which you'll only see his name if you read the instruction manual, a fighting game series that few people on GF care about, and a Ninja Gaiden title for the Xbox that only sold around 500,000 copies. Hayabusa was able to pull one out against a declining Jill Valentine, but a Square lead is something else.

Lastly, take a quick look at Squall last year. He had a decent victory in the first round, but despite this, he was expected to get killed in the second round. Um, oops? Squall turned around and proceeded to layeth the smacketh downeth on Luigi. Only around 35% of people picked Squall to do this.

Fast forward to this year. Sora had a decent win in the first round, but everyone expected him to bow out in round two. Yeah, you know the rest. Factor in the prediction percentage, and Sora becomes this year's Squall. 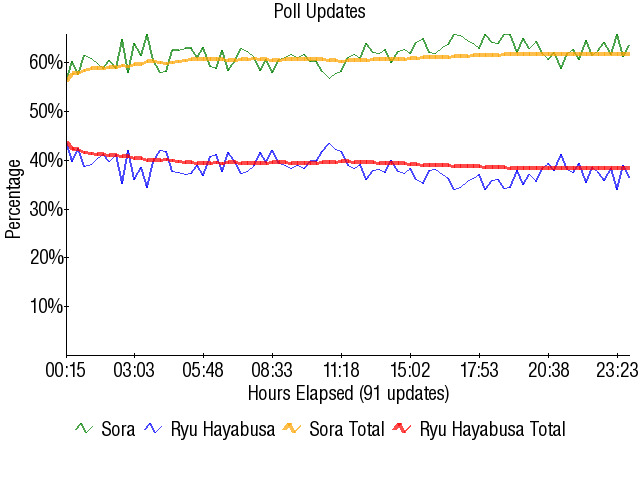 Retrieved from "https://board8.fandom.com/wiki/(6)Sora_vs_(3)Ryu_Hayabusa_2004?oldid=55878"
Community content is available under CC-BY-SA unless otherwise noted.