Time to bust out "Why does this character get so overrated every year?". Current Subject: Yuna.

(Side Note: Yuna is not as popular here as people think. Check these two polls out:


Where does all the faith for Yuna come from? The only thing she's ever done was as a direct result of the female bracket, which means about as much as the villain's bracket at this point. Meanwhile, Zack more than proved he was legit last year. Bandwagon or not, SFF help or not, he almost beat Mario. And this was after dominating three matches, two of which had Link in them. This really shouldn't have been a match anyone thought about for more than two seconds.

On a related note, Leonhart4 had a perfect bracket and first place in the guru until this match, but the REIGN OF TERROR came to an end at the hands of OUR the ZackUNFair, leader of ZackFAQs. The match was never close, either. For a debated match, Yuna got utterly destroyed.

And for the record, I'm a huge fan of hers. But why she gets overrated in contests every year is beyond me. And while Crisis Core was one of the worst games ever made, it wasn't Zack's fault. It's nice having a JRPG main character not be some brooding idiot, for once. Not that you could tell by his pictures, of course, but he is generally a happy guy. 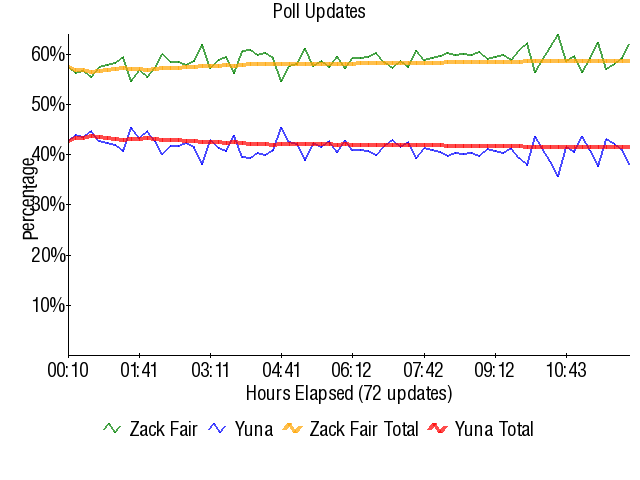