Thanks to yet another "stacked" match from CJayC, we got to see an "interesting" hero versus villain affair in the form of Mario vs Bowser. Someone really dropped the ball on this bracket, because to have such colossal blowout in the second round simply to set up Mario vs Crono 3 is wrong. Bowser and Magus were horribly shafted in this bracket, because in a balanced field, they are among the better characters in the field. But sadly, we got to watch two of gaming's finer villains go down on consecutive days simply because there were those who felt that company-based brackets and rigged matchups late in the contest meant for a better contest overall.

I'm sorry, but look at the second round prediction percentages for the Hyrule division. With the exception of Yoshi/Luigi, every match in this division was literally predetermined for two rounds. This isn't just boring, but it's flat out wrong. And what was the point? To give Link the easiest road possible into the finals? To set up Mario vs Crono 3? Most people knew for a fact that Mario was going to make it into the Hyrule Semifinals, and those who didn't were likely filling out joke and/or zero brackets. As for those who actually believed in the OMFG MARIO VS BOWSER HOW INTRESTING!1!! nonsense, I feel sorry for you. All three of you.

Even worse here is the fact that Crono and Magus were stuck in the Hyrule Division in the first place. If you're going to make a company-based bracket, at least put the characters in with the right company. Why they weren't stuck in the Midgar division is beyond me... oh wait, that's right. Mario vs Crono 3. My apologies.

Since it was already obvious that Bowser was going to get royally screwed over by his placement in the bracket by getting SFF'd to hell again Mario, the only interesting comparison to be made from this match was between this match and the one before it. SFF may be a fickle thing to analyse, but in this case, what else did we have to look at? And to this extent, the math was somewhat of a tell as to who had the edge going into Mario vs Crono 3. Magus is stronger than Bowser by a few notches, yet in the two second round matches, Mario and Crono beat their respective opponents by nearly identical numbers. Assuming that Bowser and Magus remained static, the math leading from this would suggest that Crono was stronger than Mario; Mario would have to be weaker than Crono for Bowser to score the same percentage on him than what Magus was able to manage against Crono. Aside from SFF being inconsistent, this was the only way to explain why the two matches were so even. And if SFF were removed from the equation completely, then Mario was in for an uphill climb in his next match. No other way around it. The only way for Bowser to score equal to Magus in any poll was to face a weaker opponent than that of Magus. And even with SFF factored in, Crono clearly had the edge going into their predetermined duel.

But everyone knew that already, as the Hyrule divison was that much of a joke. A quick question for those still following the topic: had Mario vs Crono 3 been as exciting as the first two Mario/Crono matches, would suffering through the rest of the matches in the Hyrule division have been worth it?

Personally, I say no. But maybe it's just me, especially considering that Mario/Crono 3 could have easily been set up without screwing over Magus and Bowser in the process. 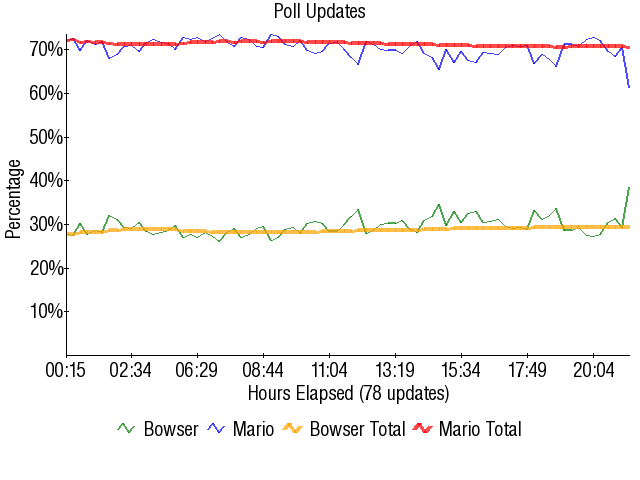 Retrieved from "https://board8.fandom.com/wiki/(7)Bowser_vs_(2)Mario_2004?oldid=55856"
Community content is available under CC-BY-SA unless otherwise noted.