Diablo made quite the run in this contest, but he came to a complete brick wall in the Final Four. This was the point in the contest where everyone pretty much started packing their bags and accepting the fact that the excitement was over. Diablo was out of this match within seconds, and despite a minor push in the middle of the match that brought Ganondorf from 65% to 63%, it was nothing legendary and we all knew that we were up for the predetermined final that we all knew would happen all along: Sephy over Ganon. The only things I can even think to say about this match aside from the obvious fact that Ganon won was how dominant Ganon was in his matches. None of his matches were even close, and though he had little chance in the final, it was likely that he would do a little better with early Sephy anti-voting than Bowser.

But only 56.56% of people picked Ganon to make the finals? The hell? 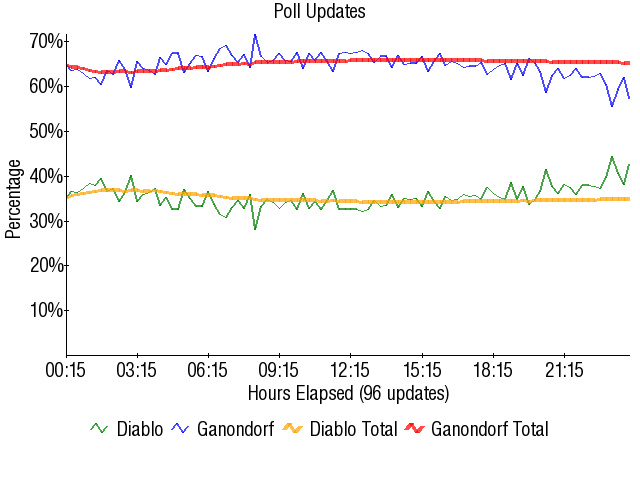 Retrieved from "https://board8.fandom.com/wiki/(7)Diablo_vs_(1)Ganondorf_2005?oldid=56001"
Community content is available under CC-BY-SA unless otherwise noted.