If sales directly translated to GF popularity, Pikachu would have won this match with ease; unfortunately, sales mean little to GF users. We are a very set bunch in terms of who we like, and in this particular 2002 matchup, we proved just how much sales actually matter. Pikachu, star of the second best selling series ever, was flat-out annihilated by Cloud. Not only did Cloud almost break 80%, but he did so in the second round. Nearly breaking 80% on a character who had already won a match was obscene, at least at the time.

After comparing Mario and Cloud's matches, it seemed that Mario was in a bit of trouble. While Mario struggled to double a fighting game character, Cloud nearly broke 80% on Pikachu. And while it may be somewhat difficult to imagine Mario scoring 80% on Pikachu, it's hard to imagine Cloud not doing better than Mario did against Morrigan Aensland.

But aside from this (which was blatantly obvious), the one thing that stands out from this match is Solarshadow's test. I can't find the damned thing, but I'm sure some random stat freak has it archived somewhere. Anyway, Solarshadow tracked how well Cloud did through the day in this match. What he discovered is that Cloud was at his peak in the early voting, as well as the evening. Whether or not this would translate into a trend or not remained to be seen; remember, we didn't have a Poll Updater or update topics back in 2002.

The solarshadow update page Ulti was talking about can be found at http://solarshadow2002.tripod.com/distribution.html. Here's the graph from that page, which covers how many votes per minute each character was pulling in during every point in the day, and also how many total votes per minute were being cast. 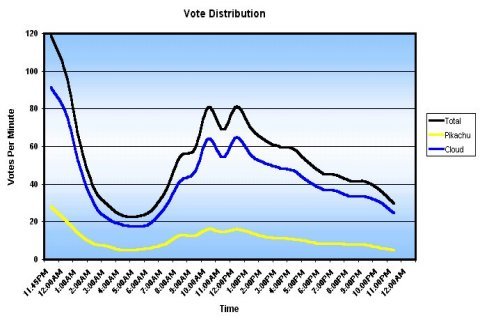 Retrieved from "https://board8.fandom.com/wiki/(7)Pikachu_vs_(2)Cloud_Strife_2002?oldid=67596"
Community content is available under CC-BY-SA unless otherwise noted.