This division had not one, but two fourpacks of "I can suck more than you". Zidane and Ike took turns bombing in the first round. A couple days later, Ryu Hayabusa and Master Chief did the exact same thing.

Chief can be explained. No one likes him, and he gets anti-voted to hell in every single match. He's probably the one character left who would lose a board vote to Sephiroth. Ryu Hayabusa… can't be explained so easily. This was a very strange match, because most people were expecting at least a doubling. Crash had never been more than useless trash fodder in these things, and Ryu H has always been decently strong. He's had good-enough 1v1 performances, and some hilarious 4way moments. This guy once beat Kingdom Hearts by himself, and a year later he beat Zero -- after losing to him 63-37 in 2005. You don't mess with ninjas.

But this was Winter 2010, a contest that made no sense. Ryu Hayabusa lost the board vote to Crash pretty badly, then only got up to 64% or so overnight. Then he turned around and got waxed with the morning vote. Getting only 62% on Crash was really bad at the time, and it seemed to stem all talk of a Ryu H > Chief upset. All Chief really had to do was not embarrass himself against Spy.

But, uh…. yeah. This is Master Flop we're talking about. And on a total side note, being a ninja automatically makes you a midcarder on this site. Gamers love ninjas. Shadow would almost assuredly be the strongest FF6 character (and he would SMOKE some fool if he ever made a sprite round), and Edge from FF4 has amazing official art. Someone make this happen. 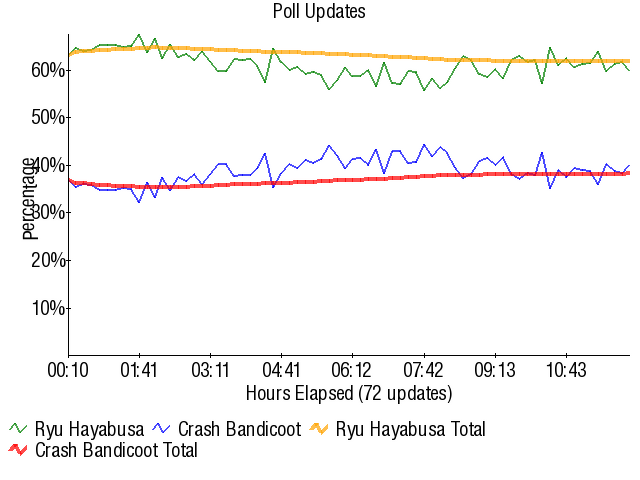 • Previous Match       • Next Match
Retrieved from "https://board8.fandom.com/wiki/(7)Ryu_Hayabusa_vs_(10)Crash_Bandicoot_2010?oldid=59160"
Community content is available under CC-BY-SA unless otherwise noted.