The Midgar division was full of characters and games that really need to go away and stay out of contests. Balthier is another such culprit, even though he might be the one thing from that game worth putting in a positive light. Final Fantasy 12 is a terrible game and is completely indefensible. MMOs are not meant to be single player games. When you try to turn them into single player games, you get Final Fantasy 12. And not only that, but the game is SO REVOLUTIONARY that it plays itself. You can, and will, fall asleep playing it from not doing anything. There is next to no plot outside of "here’s a world map, where do we go next", the design is horribly generic and there are almost no good characters to speak of besides Balthier and Gabranth (for the 3 minutes he's on camera). Maybe Fran and Ashe if you enjoy seeing how far those cosplay freaks are willing to go (Ashe would be better if she didn't spent 95% of the game fretting over one choice and being a complete idiot about it the entire time), and *maybe* Basch would be decent if he had more screen time. Beyond that, no one. Not even Cid. We've seen the mad scientist act a million times from a million characters. Why Board 8 has a 200 post topic with the same 3 whackos arguing against these points (I like to call them "facts") every month is beyond me. The game is not good. The characters are not good. Stop pretending there's something good here when there isn't.

In related news, Ryu was over 70% in this poll for awhile before the Square overnight vote hit. A hilarious match idea that came from this match and the Pokefad: (6)Kadabra vs (11)Balthier.

What's sad is Balthier would probably lose that. 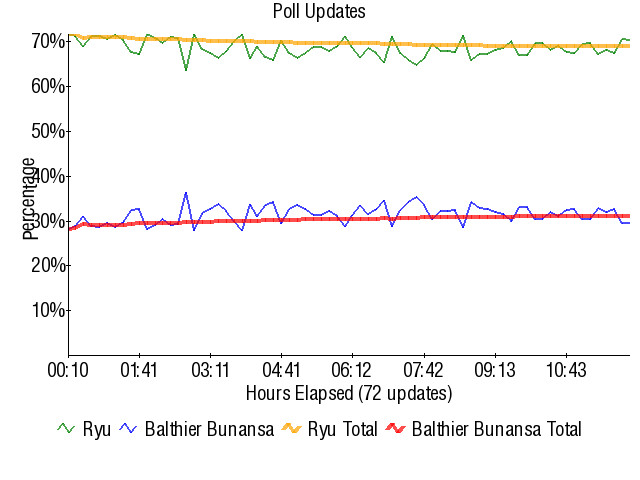 • Previous Match       • Next Match
Retrieved from "https://board8.fandom.com/wiki/(7)Ryu_vs_(10)Balthier_Bunansa_2010?oldid=59184"
Community content is available under CC-BY-SA unless otherwise noted.