The USA went into the gold medal game on a huge high, having come off of completely godstomping Finland or Sweden or whatever other inferior hockey team they wrecked in the semifinal. Doesn't matter who. America rolled them. Earlier in the tournament, they had also defeated Canada 5-3 thanks to a Herculean effort from goalie Ryan Miller. Canada almost went on strike following that loss, but they managed to regroup in time. They too rolled through elimination play, setting up a huge gold medal game against the United States with revenge on the mind. As an added bonus, they would have legions of screaming fans on the home ice behind them.

Canada came out flying in this game, setting the tone for what would be a very fast, well-played contest. For a hockey player, it was the perfect game to be a part of. Very fast, good hitting, very few penalties and a lot of excitement and honor to play for. But for the first period and half the second, Canada played with a massive sense of urgency and it showed on the scoreboard by a tally of 2-0.

The USA, however, was having none of it and refused to crack under Canada's pressure. Midway through the second period, the Americans scored on a lucky deflection by Ryan Kesler to make it 2-1. At this juncture, the intensity and pressure mounted ever higher into the third period. Though the Americans were game, Canada seemed one step ahead through the entire third period and came close to putting the game away time and time again. Shea Weber and Chris Pronger both hit the goal post on successive shifts, and Sidney Crosby blew a golden breakaway chance late in the period.

With the score still 2-1 late in the third, America was forced to pull the goalie and attempt a late 6 on 5 goal. With less than 30 seconds left in the game, America seemingly pulled off another Miracle on Ice. Patrick Kane flung a shot on net, and it deflected perfectly to Zach Parise. Boom, tie game. Canada was shocked, but not panicked, America had forced overtime when they had outplayed America most of the game, and most spectators feared the contest was over once Parise scored. America went on record thinking they would definitely score in overtime.

However, America was outplayed in overtime even more than regulation. They only threatened once in the entire overtime, and Robero Luongo easily made the save. Canada meanwhile flew all over the place, played some wicked defense and kept up huge pressure on American goalie Ryan Miller. Not too long after Joe Pavelski's miss, Sidney Crosby found himself loose in the corner of American ice. He made a fabulous pass, beelined for the net, received the assist and banged the puck home to give Canada the overtime win. It was an outstanding game by both teams, truly worthy of worldwide respect, but only one side had Crosby on it.

For Canada, they pulled though in perhaps the biggest situation they'll ever have athletically. Hockey is Canada's sport, and with the Olympics in Vancouver they HAD to win gold. Anything less would have driven the country into a depression. America was stung by the loss, by they can hold their heads high knowing they got father than anyone expected them to go. Worldwide opinion of America is very mixed right now, but efforts like this show the honorable blue-collar resilience and toughness that got America so much respect in the first place. Maybe in four years, we'll see a rematch.

Ryu and Dante's 2010 match inspired the term Hockey Factor, since it was going on during the men's hockey gold medal game of the 2010 Winter Olympics. In this match, there was an observable trend in which the progress of the match reflected the status of the game: Dante increased his lead while the game was going on, and Ryu made cuts during the intermissions and went on a steady run after the conclusion of the game to eventually take the match, which ended up looking closer than it actually was. The reason for this occurence was that North America prefered Ryu while places like Europe and Asia heavily favoured Dante. While the hockey game was on North America was occupied thus giving Dante a boost due to Europe and Asia having a higher percentage of the votes. 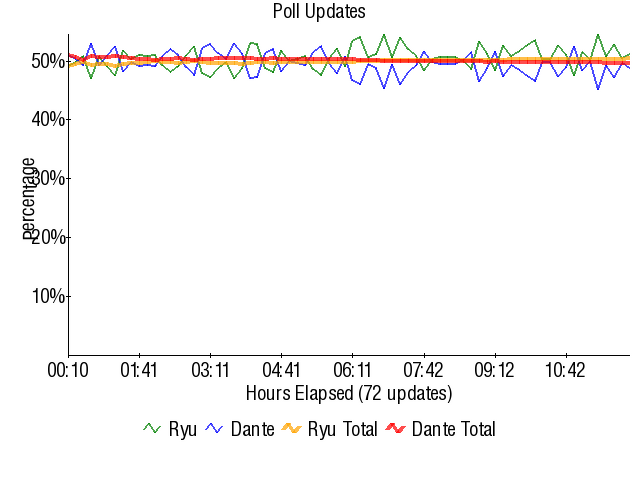