And now begins the portion of every contest in which we get to day one day, and one day only, to laugh at Gordon Freeman. In every contest, a spot is given to Gordon Freeman solely to give him a chance to win. In 2002, he was given a 3 seed and a weak Tina Armstrong in a seemingly easy first round match. But the legend of GFNW began on that fateful day as not only did Gordon Freeman lose, but he was blown away by Armstrong's TJF.

So what happens in 2003? CJayC was well aware of how big a joke Freeman was after the 2002 contest, so he pits Gordon Freeman against the likes of Max Payne in a match that was seemingly designed to hand over a win to Freeman. But Gordon Freeman winning a match would not adhere to the laws of the universe, not would it? Not only did Gordon Freeman lose to Max Payne, but he was never even in the match. Gordon Freeman went from being a joke to being a flat-out laughing stock, but it would get even worse. Or better, considering your perspective on things.

In the Spring 2004 Contest, Gordon Freeman was treated in the way he deserved to be when Half-Life was made a 13 seed and was forced to take on Metroid Prime in the first round. But rather than roll over and die, Half-Life actually wound up giving the heavily favored Metroid Prime a fight in the poll. Metroid Prime jumped out to a 300 vote lead, but Half-Life forced a 50-50 split for the next few hours before finally rolling over to the morning vote.

So here we are in Summer 2004, with CJayC back to giving Freeman a first round match that caters to him. Sam Fisher performed well against Magus last year, but even still, he is just another lesser-known male character on the opposite side of Gordon Freeman. Unfortunately for us, we have access to Extrapolated Standings. Fisher finished far too far ahead of Freeman last year for Freeman to have much of a chance in the match, but we still had to sit through this crapfest for 24 hours.

When the match began, Fisher jumped out to an expected lead despite multiple Board 8 members voting for Freeman just for the hell of it. But shortly after Fisher jumped out to the initial lead, Freeman began making a push at Fisher's lead. What was once a lead that threatened to hit 200 votes soon became a match separated by a mere 70 votes. But like every match Freeman has been involved with in the past, Freean was merely teasing with the idea of actually winning a match. Freeman's true colors came out, and Freeman's genuine desire to lose soon kicked in to play. Sam Fisher caught the morning vote, and soon after, he ran away with the match. But everyone knew that was going to happen already, didn't they? It was never a matter of whether or not Freeman would actually come back, but how long he would give the illusion of actually trying to win a match. Freeman winning goes against the very laws of the universe, and he soon accepted his role.

On a serious note, Freeman did far better than what was expected of him in this match. He was supposed to get blown out, yet he managed to give Sam Fisher quite the battle before finally going down. Whether or not this was a sign of a Freeman strength or a Fisher weakness had yet to be constituted, but it was fun to ponder both sides of the equation during the match. Honestly, what else was there to do? Think that Freeman's good showing in the morning was a sign that he would win? Please.

The fact of the matter is that Sam Fisher allowing someone like Gordon Freeman to stay so close to him for so long was only a symbol that Fisher was pretty damned weak in his own right, and he would have likely not won a match in this contest had he faced anyone other than Gordon Freeman himself. 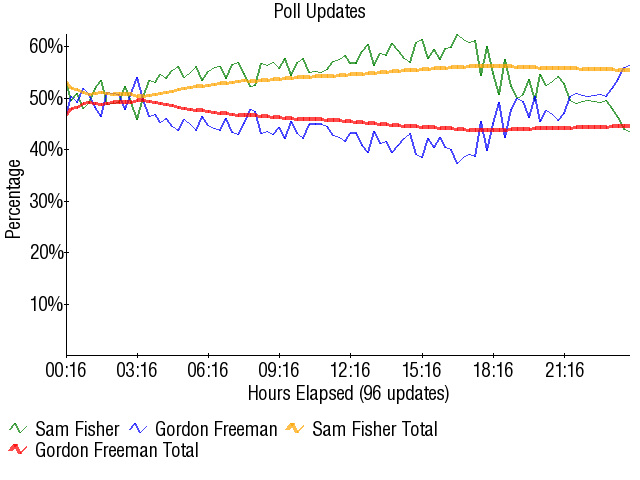 Retrieved from "https://board8.fandom.com/wiki/(7)Sam_Fisher_vs_(10)Gordon_Freeman_2004?oldid=55846"
Community content is available under CC-BY-SA unless otherwise noted.