First off, what a freaking outstanding match pic. We've been trying to get that Vivi in for years, and it finally happened. And on top of that, it gets matched against a total godslayer Altair pic that would put the fear of God into Lucifer himself. This is without a doubt the best picture of the first three rounds.

The match itself, not so cool. Vivi doing almost exactly as expected against DK, contrasted with Altair's shivving the crap out of Liquid Snake made this match very debatable. Vivi hadn't really shown much in years, and Altair was seemingly a newfound monster of a character.

Then the poll started, and Altair was just never in it. Vivi jumped out early, had a 1000 vote lead after 45 minutes and never looked back. Worse yet is Altair won a grand total of…. one update all match. 11 hours in, no less. He came into this looking really good, then just rolled over and died come game time.

56-44 might not look so bad on paper, but consider this: Altair lost so badly that the final 2010 extrapolated standings have GLaDOS > Liquid Snake. Think about how ridiculous that result is for a second, then go look at how Altair and Liquid did in their losses. This is far beyond the point of being contest trolls. Altair and Liquid are now the official contest condyloma. 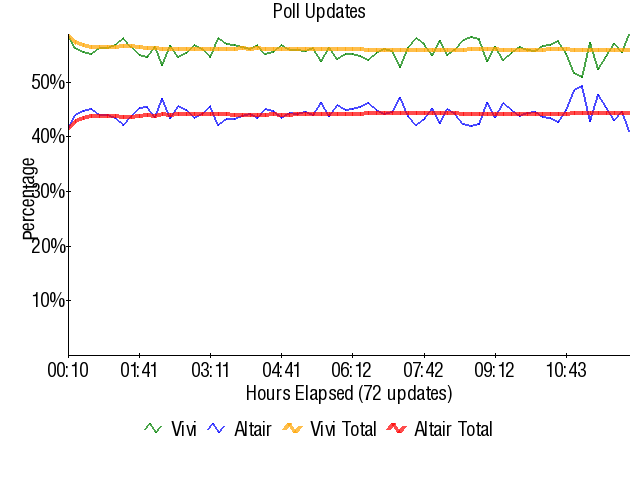