People were really down on Sonic Team before this match happened. But hey, Knuckles > Cecil was supposed to be an easy come, easy go blowout that helped the Sonic guys get some respect back.

Yeah, whoops. The match started, was almost dead even for 30 minutes and the entire site just dismissed Sonic Team on the spot. This wasn't supposed to be a close match in any way; the Oracle had this at 60-40, and that's with some people seemingly down on Sonic for no reason. Cecil is the dude that got 75-25'd by Kirby. Knuckles is the guy that upset Magus and generally has a day vote that rolls heads. No matter how weak Sonic gets, the whole crew will always have a really good day vote. Yet somehow, this was close in a DAY MATCH with Sonic Team against Old Square. This should have been a complete joke, but wasn't.

Knuckles did of course slowly pull away after the early shenanigans ended, then with the ASV he made the match look farther apart than it deserved to be. But make no mistake, this was one of the most Pyrrhic victories in contest history and it more or less made Knuckles Turd of the Contest. You're Knuckles, with a godly day vote against Old Square, who coincides with a TERRIBLE day vote. You don't rely on the ASV to put away Cecil Harvey in a day match and retain respect. You just don't.

Given what Cecil pulled off in a day match, he might have actually won a night match. Talk about a guru-buster. This was the first match where people really started talking about a Dissidia Boost, but the big blame was put on Sonic Team. I know Sonic gathered himself in later rounds (maybe because of Sonic 4 info or something), but something was definitely wrong with those guys early in this contest. When Tails comes out looking better than anyone else, something is seriously wrong. 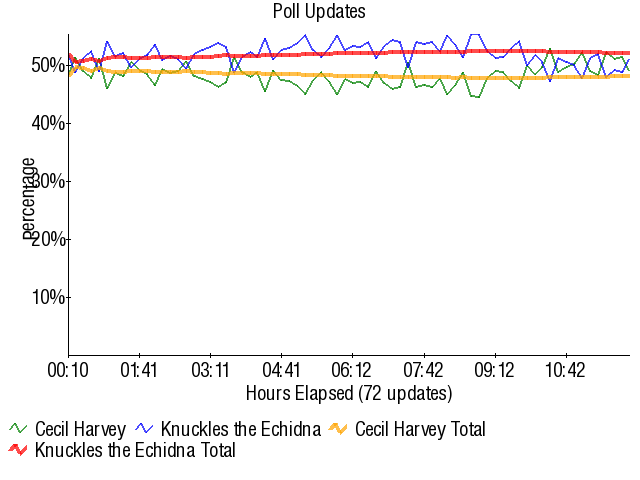 • Previous Match       • Next Match
Retrieved from "https://board8.fandom.com/wiki/(8)Cecil_Harvey_vs_(9)Knuckles_the_Echidna_2010?oldid=59147"
Community content is available under CC-BY-SA unless otherwise noted.