And to round out our fifth division, we were treated to what was probably the lock of the contest. Solid Snake, in addition to being the Best Character Ever, is also none too shabby in these contests, and was a lock to take first due to that upper tier Noble Nine pedigree. Vivi, while not quite as stellar, uses his fan-favoritism from FF9 and his trademark Black Mage Factor to perform at a good midcard level.

Their opponents? Albert Wesker, who got held under 30% by Kefka in his first contest outing, and Sackboy, whose game was both unreleased at the time and in the same match with probably the only character in the world who can SFF him. What the hell, SBallin'.

As such, the only things to really watch here were the numbers, and Snake went out and put up that classic underperformance that we'd expected from our obvious winners by now. This didn't mean so much to all of the others, but Snake had just enjoyed the best year a character could have asked for in contest history - the release of Metal Gear Solid 4 AND Super Smash Brothers Brawl. People were even going so far as to have him beating Cloud in the semis with Sephiroth (hello), with the really nutty having him place in the finals. I get the feeling some people were expecting 60% here.

Meanwhile, Vivi had a really stellar day, putting up good enough numbers on Snake and standing out so much in the next round's lineup that people were considering him for second. And after what Zero had just gone and done, more power to them, you'd think!

Wesker and Sackboy were left with the leftovers, of course, with Wesker struggling at many points to win whole HOURS against the little guy. Seriously, when you're struggling to beat a SFFed character whose game isn't out yet, you know you're bottom of the barrel, and I love Wesker. Sackboy, for his part, definitely deserves a shot at another contest if LBP wears well. Just... hope he doesn't get put against Snake again.

And just because I can - even though it took the day vote to do it (uhhhhhh), Snake did end up a percent ahead of his Oracle prediction in the end. He was also graced with having one of the strongest fourpacks a Noble would have to deal with next round, so he'd have the chance to stretch his legs there. 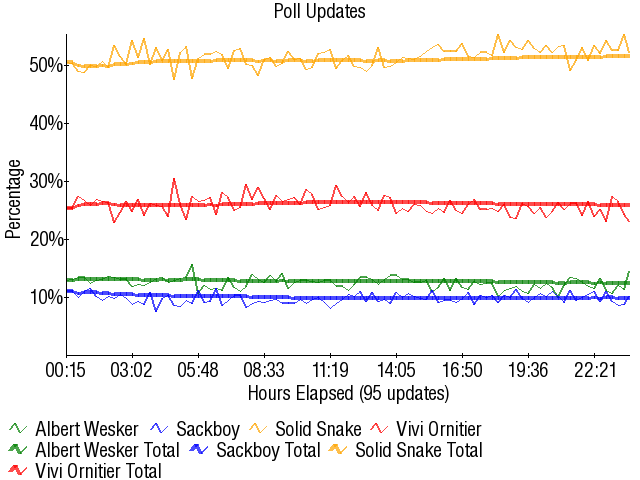 Speaking of awesome matches between even characters, today is... well, not one of them. I've been wrong before, obviously, but I'm going to go ahead and say that there's not any way I see this upcoming poll being too entertaining, at least in terms of placement. Should still be fun to watch as an indicator of how next round's fantastic battle for second ought to play out, though. Let's dive in!

The story of Snake in '07 is kind of a sad one. I mean, here's a guy who looked absolutely incredible in this format, performed like a monster, made it into the Championship match, held up decently well against the two strongest characters we'd ever seen... and yet the only thing people recall about him is how seemingly every time you turned around the guy was struggling to pull ahead of a Tetris block. Well now he's back, and this time around he has been playable in Brawl, been top tier in Brawl, sold a ton of PS3s with MGS4- in short I'd be very surprised if between this format and all the extra exposure this wasn't the strongest version of Snake we've ever seen. A shame he didn't get placed in a 4-pack with a set of chumps, or I think he'd have had a legit chance of scoring the biggest blowout of the round.

Vivi is a character who I think we have a pretty good bead on. Maybe we were a little surprised to see him unable to hurt Tidus more than he did last season, but aside from that he seems like a reliable guy who we can pretty much depend on to perform in that 23 to 25 mid-range on BL, at least when he gets to act independent of other Square like in this one. Wesker seems fairly reliable as well- he's one of those dudes who is just no good in these Contests, but has enough of a fanbase to never be completely awful either. I'm thinking that in 9 out of 10 cases he would live up to the billing and come out either just below or just a hair above that fodder line.

The wildcard of the group is of course Sackboy. Before the jokes started really taking off, I heard him being discussed as a good candidate for the 128th position on the final stats for this season. But a Dog and and a Block and a Cube later, some of those same people are giving this Sack serious consideration for second place in this group- WHAT? Yeah, well afraid I'm not buying either of those two extremes: Sackboy might look like a joke, but with how heavily LittleBigPlanet has been promoted and hyped recently I'm giving voters enough credit to at least somewhat know him. And knowing him could easily work against him... no one hates Valve, but Sackboy is king of setting himself up as a posterboy for all things PS3, and that might be a dangerous place to sit considering this site's demographics. Especially when the console's REAL poster-game has a representative sitting right at the top of this poll.

So Snake should be even more Steroid Snake than usual, Vivi and Wesker shouldn't surprise us, and Sacky... dang, I can't count him out entirely because he does look ridiculous, and clearly that's something the voters value highly these days. Let's take all those considerations into the pot a stir for a few minutes until:

That looks... actually, pretty good. Come on Snake, put on a show for us!

What a weird year... Remember when the Contest heavyweights used to use the first round to play a game of "how do you like me NOW!", matching blowout against even bigger blowout, constantly setting the bar higher for their next appearance? You know, like in '07. And '06. And every year before that. But this season we've seen Link, Mario, Mega Man, Vincent, Ganon, Samus, and now even Snake perform slightly below expectations. Of all of those, this Snake showing is the most surprising to me, just because he figured to have the most to gain over the past 12 months. ...actually no I take that back, Vincent allowing Falco to hang so close is still the most confusing result from a heavyweight to this point.

Retrieved from "https://board8.fandom.com/wiki/Albert_Wesker_vs_Sackboy_vs_Solid_Snake_vs_Vivi_Ornitier_2008?oldid=66225"
Community content is available under CC-BY-SA unless otherwise noted.