Shadow's epic bombing got all of one day afterward to bask in its glow, because two days later we were treated to THIS debacle. You want to talk about pathetic?

Lucario is a Pokemon. Not just a Pokemon - arguably THE Pokemon of the latest generation. Ever since Pokemon nearly beat Metroid and Nidoran F stood up like a champ to Samus, Pokemon have looked like gold in these contests, and doubly so in this format. Pikachu, Mewtwo, Mudkip, Bidoof - the pedigree is enormous, and Lucario had the games, his own movie, and BRAWL to help him out. And all he had to do to get to Link was beat an overhyped Prince of Persia reject, an effective SSB-only character who lost to DK, and a washed-up has-been who probably gets a good part of his strength from the hilarity of his game still not being released. Heck, if Zack bombed there was a good argument for Lucario escaping the division - if Bidoof could hold up against Link, why couldn't Lucario?

So what does he do with it? Go out and nearly lose to ISAAC, that's what. A holdover from Summer Contest 2003 whose most notable achievement was seemingly resisting SFF from Samus, all the Golden Sun protagonist has had since then is an appearance as an Assist Trophy in SSB. Y'know... the same game in which LUCARIO IS A PLAYABLE CHARACTER. Lucario has a good argument for being the biggest bomb of the whole damn contest, even looking ahead to the latest of latest bombs.

In the end, it was utterly pathetic. Lucario nearly got doubled by Altair, who used his excellent design and enormous game sales to devastating effect, leaving the Pokemon in a stupor of needing the ASV to fight off an Assist Trophy. At this point, BrawlFEAR had been utterly dismantled in the space of two matches, and suddenly every character from the game looked like it was in jeopardy, especially since a good deal of them were in SFF situations. Duke also looked like he had a fight on his hands again, although at this point no one was confident in saying anything. 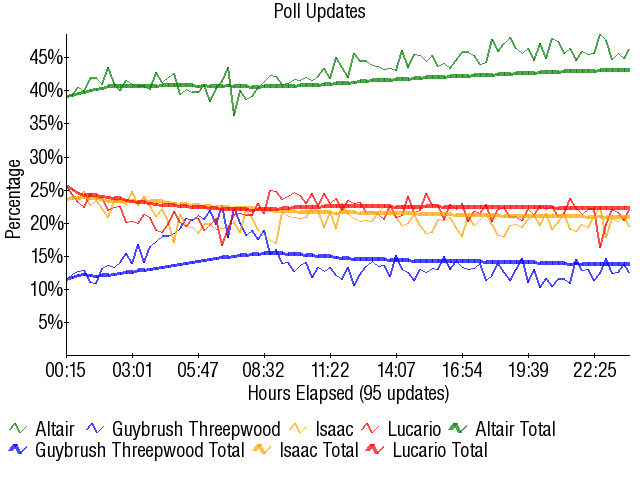 First of all, congrats to the Gurus for banding together and earning Altair such a winnable bracket positioning. That being said... I have almost 0 faith in the guy's actual popularity. Sure, he looks cool in the match pic, but people moved on from AC so quickly after those strong initial sales that I can't see any character having much of a lasting impact. I gave some serious thought to the Isaac upset here, but then I thought that maybe Pikachu hurt him with the Nintendo RPG handheld vote in '07, and if so, Lucario ought to be able to hold him back in a similar way here.

Speaking of Lucario, boy, what an unknown. I hear some people saying he's like the face of the new Pokemon generation, but then others say he can't compare to Mewtwo in terms of being the "ultimate Pokemon" or whatever. And in any case I didn't hear people going too wild when he was announced for Brawl- the only reaction I remember was people upset that Mewtwo had been booted. But look, we're talking GameFAQs 4-ways, where even Bidoof is somehow worth 21% on BL- unless I'm 100% off about Altair, Luc's not going to need to be worth much of anything to run away with this.

Isaac was worth 14 last season, but as I mentioned that might be unfair... the poor guy was on the bottom of a 4-way RPG totem pole, plus Pikachu potentially hurt him by being a Nintendo handheld draw. He's probably a good bit closer to the fodder line than that performance indicated. As for Guybrush, well, it seems pretty certain that he really IS that weak, and the only question is why 200 people continue to nominate a guy who's proven himself to be 10% on BL three times now. Seriously, we can do better!

In summary I still feel this one is a lock, but only because I have an enormous lack of respect for Altair, and just barely enough respect for Lucario's Nintendo presence to keep Isaac out of the running. So if we assign Luc a midrange Pokemon value and Altair something a bit under Marcus from last year, we can stir the pot and find...

Well now, that was just an old-fashioned kick in the face. The Zack win I could see, Zidane was weird but I could at least blame Link, Duke was crazy but I guess you should never trust Kefka. But Lucario, being this weak, after everything we saw from Mewtwo and Pikachu and even Bidoof for crap's sake? I'm still reeling.

Retrieved from "https://board8.fandom.com/wiki/Altair_vs_Guybrush_Threepwood_vs_Isaac_vs_Lucario_2008?oldid=67845"
Community content is available under CC-BY-SA unless otherwise noted.