Well, *this* was certainly an interesting little match.

From the beginning, this was a debate between two to three characters. Alucard and Diddy Kong were the probable finishers, just with the order between the two debated. While Diddy was thought to be stronger than the constantly deteriorating 'card straight up, he had a weight in Falcon bringing him down. There was also talk of Kratos Aurion sneaking in ahead of Diddy, and while that conclusion would come to be somewhat vindicated by the end of this match, it certainly wasn't in any way that would vindicate his supporters.

In the end, one part of the match played out to form - Alucard advanced easily. But on the other side of the spectrum was Diddy Kong - and he was getting his monkey ass smoked by Captain Falcon.

Captain Falcon? The same Falcon who has nothing to his name outside of SSB except F-Zero, of which I'm pretty sure only tranny and I have played and ONLY I like him from? Against the same Diddy who, aside from Brawl, has the monster hit DKC games to his name as well as a wealth of other AAA titles? Hell DIDDY KONG RACING is probably more popular than F-Zero here, so what happened?

Call it Brawl seniority or Diddy Kong simply taking after his elder simian's penchant for choking, but by the end of this match Falcon had a good argument for beating Alucard straight up. He didn't just beat Diddy, he SFFed him down to Kratos Aurion's level (and thankfully for him, everyone was so preoccupied with Diddy sucking they barely noticed his flop).

The pattern continued - if the only SSB game you had to your name was Brawl, you did horrifically. Suddenly Ike fans were really scared of a Blizzard entity waiting in the wings next match. 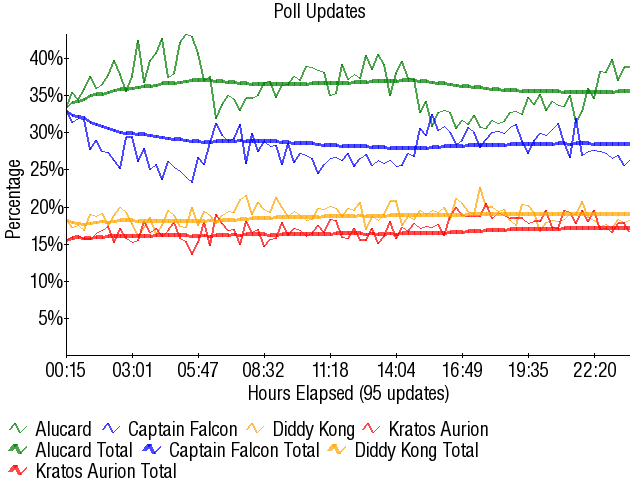 Let's thankfully move on to a non-joke match, shall we? Starting with what we saw out of these folks last time around...

This is one of the most unique setups we've ever witnessed, really. You've got Alucard, who has clearly taken a couple steps back since his 2003 glory days and is now only a little ways over the fodder line, by all indications. Then there's Kratos A, who was possibly hurt somewhat by sharing the GameCube with Midna; account for that and he's probably right there at the fodder line. And of course Falcon, who got triply held back by Fox/Wario/Banjo, and is probably right there are the fodder line otherwise (as he was in '06). And the newcomer is none other than Diddy, who by all accounts ought to be a little bit under DK in strength and... whoa, that'd leave him just a little over the fodder line as well!

What to do when all combatants are right next to each other in strength? Well you account for LFF of course! Diddy was planning to pack some newfound punch in '08 thanks to Brawl, but how much will that series be able to help him when three-time series vet Falcon is going to be right there to scoop up much of the support? On the other hand the Capn't has already proven he's near the bottom of the Nintendo food chain- could Diddy really be on a lower rung? The most likely result would seem to be that neither completely ruins the other, but both do enough damage to drop them to the bottom of this pack.

That leaves us with Alucard- fortunately, Ally's already been in a similar position, and he came through with flying colors! I'm referring of course to the last time we saw a R1 fourpack between seemingly equal opponents, where Alucard essentially tied Liquid Snake and both of them beat out Ness handily, even though he had come in with the advantage of being the only Nintendo character in the mix. Tonight there will be no other PSX-era challenger to limit his potential, so I'd be shocked to see Alucard finish anywhere but first. The bad news is, this forces me to do something I'd promised myself never to attempt again... I'm putting faith in Tales! Hate to, but Kratos Aurion is clearly the "cream" of the crop when it comes to that series, and with Diddy probably not being able to Ulti-blow-him-out even 1v1, the collateral damage from Captain Falcon ought to be just enough to allow KA to squeak by.

That makes plenty of sense... so why do I feel so awful about picking it? Don't know, but better turn those thoughts to numbers before I lose my nerve! Potted and stirred and:

I sure hope an outright Crew victory is part of The Plan- I could really use it at this point.

So anyways I was thinking about that absolutely absurd start for Falcon, and wondering when we'd ever seen something like it before. And then it hit me- Soul Calibur/Kingdom Hearts! KH was a Square RPG during the height of Square's dominance on the site that had sold 10 million copies and dominated the FAQ listings most of the year- we were expecting it to win with about 65% of the vote. Yet the poll came up and, weird, SC was hanging in there... then a minute later and SC was somehow KILLING! Now the connection here is of course that SC/KH kicked off at the conclusion of StarCraft vs Halo, arguably the most heavily rallied matchup of all time to that point, and one that came down to the final minutes. Much like StarCraft and Halo fans not caring a bit about KH, why would the L-Blockers being rallied to hold back Ryu's powerful second night vote care about Alucard? They wouldn't, and between Falcon dominating that match pic, being a fan favorite in both SSB and Melee, and having a small meme of his own regarding his Falcon PAAAUNCH, now his crazy start makes alot more sense.

(Unfortunately there's another character with a weak ASV and a powerful second night vote that figures to be cut out at the knees by Block rallying- guy by the name of Crono. How gross is it that only WCC or Sandbag have any chance of causing a Block loss from here out?)

• Previous Match       • Next Match
Retrieved from "https://board8.fandom.com/wiki/Alucard_vs_Captain_Falcon_vs_Diddy_Kong_vs_Kratos_Aurion_2008?oldid=67851"
Community content is available under CC-BY-SA unless otherwise noted.