Pikachu got put in a pretty rough position this contest - dealing with fanbase leeching not only once, but twice in the span of his first two matches. This match would pit him against an SSB vet as old as he, and while there was no (real) chatter that he could drop the actual match to him, there was the idea that he would be hurt significantly more than Ike, who would obviously have much less overlap due to a non-trivial portion of his strength actually coming from, y'know, his games. Alucard had his own problems, however, as people were doubting if he'd be able to beat Arthas, who had a pretty good showing last round. Couple that with the chatter that his power stemmed more from WC III than WotLK and that he had his WC III picture this round, and you had some variation there, too.

In the end, the expected would happen, but in the kind of dramatic fashion that we all love it to unfold in. Pikachu ripped it up with his disgusting board vote at the beginning, while Alucard showed Arthas had no chance of taking him down - heck, Arthas was losing to Captain Falcon. While he would recover, this would end up being a pretty bad showing for him, and pretty impressive for the Captain considering what he was dealing with and that he had somehow lost to WARIO last year.

As for the main event, Alucard's killer night vote took hold - and man, this time it was a doozy. In the span of an hour the nightwalker surged a comeback, snagged the lead, and built himself a healthy margin before morning came. Then, as if gaining one of his anime hax second winds, Pikachu ripped open an improbably large comeback of his own, nearly erasing Alucard's margin entirely. So what does Alucard do? Why, build up a lead even bigger than his night vote peak with the during school vote just to spite the rat, giving the slightest glimmer of hope before the ASV - all before the inevitable happened and he got slapped en route to a close victory for Pika.

Honestly, we all knew what we were in for as soon as the match started, pretty much, but the way it unfolded was something that's always good to see in these contests. Knowing the trends can diminish the surprise, but there's something about multiple lead changes and comebacks during a match that just makes me smile, and when trends are defied (as we would see in later matches), it makes it just that much more shocking.

As for final impressions, Alucard showed he wasn't completely off the map - but losing to Pikachu despite the rat's split fanbase and looking like he would have lost to Captain Falcon straight up isn't the most reassuring of things. Arthas showed he was an okay low midcarder, probably around current Diablo strength, but not much more - at least for now. Falcon was just "whoa", and Pikachu managed to simultaneously impressive and disappointing at the same time. On the one hand, he did make it to Round 3, this time as the victim rather than the beneficiary of SFF in both matches. On the other hand, he got less than 55% on Ike and let Captain Falcon make him lose to a guy who has become all but irrelevant in this day and age. At any rate, he had no shot against Block next round - though that didn't stop a lot of the crazies from arguing it anyway. 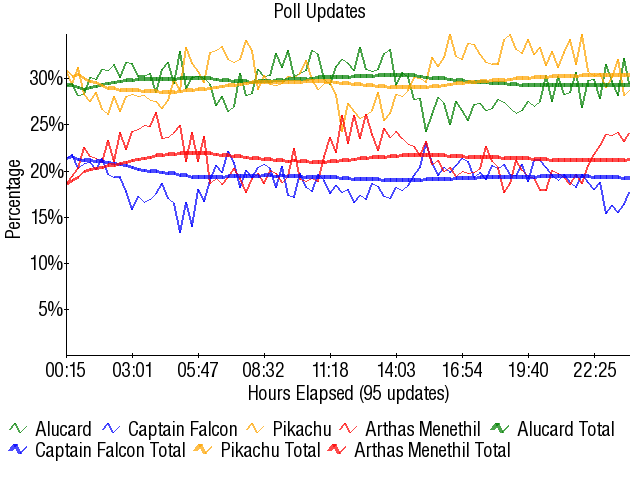 That was a fun result, and I'm thinking we'll be seeing yet another here tonight! Let's take a closer look at these four goofballs.

Eh, I trust those Alucard/Falcon numbers about as far as I can spit (which isn't very far). It was clear that Kratos was hampered by having so many Nintendo options in his R1 poll and didn't match his '07 standard as a result. On the opposite side of the spectrum, Pika and the Lich King appear to have been way underrated, but with the way Ike and Pika must have been ruining each other in that match no number coming out of that match was going to be very reliable.

Now then, experience tells us that, at least based on all we've seen this year, when Nintendo LFF gets involved things quickly turn nasty, and you should bet on the non-Nintendo options wherever possible. And yet, look at that R1 result- even with Pika and Ike murdering each other, Pika still took first place with ease, and furthermore Ike came only a little bit short of pushing past Arthas and advancing himself. Today we replace Ike with Captain Falcon, a guy who is sure to be higher on the Nintendo totem poll... I mean, he has to be, right? He's made it into all three SSBs, was a favorite of both casual and tourney players in the first two, has some memes to his credit, and some minimal F-Zero support to fall back on if all else fails. All that Ike can counter with is swinging around a gigantic sword.

...and yet, somehow, I get the impression that that's going to be enough. Falcon's awesome, but I see him pulling a repeat of that OTHER SSB dude with the amazing R1 performance and the same name except for an "N" who nevertheless collapsed and burned when the pressure mounted in R2. So yeah, Falcon for last place, and probably won't match Ike's percentage against Pika. As for Alucard, sorry, just not buying it. He got the ideal setup last round, standing out big time against three pieces of Nintendo fodder or near-fodder, yet he still only managed a 5% win against the guy who should be the weakest today. I picture him contending for advancement or perhaps even the outright win throughout the dead hours of the night, but then shriveling up and dying once the sun rises for a third place finish.

That leaves us with Arthas vs Pikachu. Arthas has a couple things working against him, namely that Falcon probably doesn't hurt Pika quite as badly as Ike did and that WoW players aren't going to be spending as much time tomorrow on fansites and message boards (they were back in R1 because a Wrath of the Lich King pre-patch knocked servers worldwide offline for most of that day). But he also has one big thing working for him: the perfect match pic! WoW was already going to be voting in support of him, but this should help him appeal to any Warcraft III players who wouldn't have recognized him in his Lich King form. Also I think his rally power might be a little more effective here, as WoW players might care about the match more now that we're into R2 and the competition is better. All in all I see him improving slightly against Pika; probably won't be enough to net him the win, but ought to be able to outlast Alucard.

And Pikachu, well, wins again! Though as I've stated above it ought to be a bit closer than last time. Taking all that into consideration and turning it into numbers, let's see what some pot-stirring results in.

Heck of a cool match today. I'm still having a hard time wrapping my head around how Alucard only falls from 35% to 30% when you swap out Diddy Kong and Kratos A in favor of Pikachu and Arthas, especially since he ought to have stood out more against the Nintendo competition last round and overperformed THERE, not here. But I guess this goes to show why Alucard/SotN are so cult or niche or whatever you want to call it- they're not going to blow anyone out, but that 20something% fanbase is going to always be there, just like they were for him last year in R2. As for Arthas, I guess last round all the WC3 players were voting for him based on his name while all the WoW players were voting in support of the WotLK box they'll be buying soon. So switching to this old picture continues to get WC3ers involved, but WoW no longer cares and that caused his drop.

In any case, at least we're going to get to see Pikachu tear into the Block's face with full on, un-LFFed Pokemon/Nintendo Power! Sure the odds are still against him, but that didn't stop him from getting an R/B/Y sprite and destroying our expectations in R3 last year. Come on Pika, let's see another amazing run to R4 from you!

Retrieved from "https://board8.fandom.com/wiki/Alucard_vs_Captain_Falcon_vs_Pikachu_vs_Arthas_Menethil_2008?oldid=63191"
Community content is available under CC-BY-SA unless otherwise noted.