It's a shame this was a fourway match that had no lasting effect instead of a one-on-one, because it was such a damn good match. Not to rain on anyone's parade here, but the format murdered this match's glitter. Alucard and Liquid's photo finish only mattered for points, since both advanced anyway. And since neither character had a prayer of advancing past round 2 anyway, this mattered for round 1 and nothing else.

That said, a 3 vote finish is still worth talking about, and even before that a lot was going on. Zidane was actually in this match for a few seconds, but fell off the map quickly and was destined for last place. Ness was in this for a considerably longer period of time, and for the first hour of the poll this was a three horse race. But then the Nintendo Power Hour ended, Ness fell off the pace and that was that. He would never again sniff first or second place here.

Which meant this was about Alucard and Liquid fighting for points, though for the longest time Alucard was in first place somewhat comfortably. He built up a 400 vote lead overnight, and given how bad the MGS day vote always is this seemed over. Yeah Alucard's day vote is also bad, because that's fitting for vampires, but two bad day vote characters don't often see wild day vote shifts.

But then Liquid erased all 400 votes in a couple hours, before the heart of the morning vote even hit, and then the morning vote came in full force to somewhat bury Alucard. Liquid began building a lead, albeit very slowly, and the gist of it is he inched upward all day. Alucard's day vote is terrible, but so is Liquid's so of course any day vote build was going to be super slow.

Despite Alucard's periodic stalling, Liquid had a lead of close to 700 with 7 hours left. And he would almost literally need every single one of those votes, because as we all know the sun going down means vampires wake up. For awhile, Alucard wasn't coming back so much as inching back. That 700 with 7 hours left? Yeah, it was still 600 with 5 hours left. With 4 hours left, it was still 550 or so. Even an hour later, it was still 500 votes. So it basically looked like Liquid would win, just win a little closer than he would have liked. Hint hint.

It wasn't until the sun went all the way down did Alucard wake up for real, which is fitting given he's a vampire and all. In that 22nd hour, Alucard (SPOILERS this is totally not Dracula backwards END SPOILERSlol) started making his real move. A 500 vote lead became 295, making the pace to come back well ahead of what he needed. Liquid pushed back a little, but Alucard was able to get it all the way down to 170 with an hour to go. It took him only 25 minutes to get it down to 65, and if Liquid were from almost any other series Alucard getting first place probably would have been inevitable.

But Alucard made the same mistake several others have made against Metal Gear Solid -- that is, he came back too early. To avoid the 25th hour MGS rally, you have to win on the very last update and/or completely crush all hope. Alucard finished his comeback to go up 11 votes with three updates left, and we all know what happened from there. 11 turned into only 3, and then Alucard pushed it back up to 17 with one update left.

Everyone refreshed at midnight, and you can see the end result. To date, our 3 vote margin of victory here is a record, but in my mind the true record is still Frog > Master Chief's 7 votes. Does this 3 vote first place > second place really mean anything historically when both characters "won" anyway, only to both lose in round 2? Not really, no.

1 on 1 records > this stuff, at least in a certain context. If this were a late round match, fine, but it was a meaningless round 1 match. And meaningless round 1 photo finishes to decide first > second place matter much less than a photo finish in a 1 on 1. What do you remember more, this match or Jill losing by 27 votes twice? This match or the legendary cheating in Vercetti > Kefka 2005? I'm willing to bet most people can't name the other two characters in this poll without looking it up, too.

Not trying to bash fourways or anything, because the first fourway contest was honestly pretty cool. But 1 on 1s have much better finality to them with matches like this. Or to put it a different way (and I'll even keep it in fourway context!):

The exact same "1 on 1 within a fourway" happened twice, and I don't need to tell you which one mattered more.

the closest match in contest history -- also the most debated round 1 match pre-contest -- isn't in the top five? what?

I admit it - I'm a bit biased against this match, because I wasn't home for the end of it. I remember, at about 6:30, I was tired of Alucard's teasing and called it for Liquid and went out for the night. the very second that happened, the Alucard comeback was on, and I was three votes and one last-second rally away from "pulling a Slowflake."

but let's rewind - pre-contest, the consensus was that we'd have three PS1 guys and Ness, a guy who had burned a lot of brackets over the years. fearing the Nintendo Boost - we never really got to see what Ness was made of in 2005, and he skipped 2006 - a lot of people picked Ness out of fear. it's not completely unjustified, really - plus, we hadn't seen Liquid Snake since the Villains Contest, where he got utterly destroyed by Sephiroth. it was tough to have a lot of confidence in him, so the consensus went either Alucard > Ness or Ness > Alucard. MGS had been impressing left and right though, and by match time it was a big jumble between the three guys.

come match time, the match played out like we expected - Ness getting a nice board vote, Alucard staying right with him, and Liquid Snake in a close third. by the end of the first five minutes, Ness took a 24 vote lead and Liquid was pretty much tied with Alucard. it looked like a tight three-way match that would live up to the hype.

the next update, Ness fell off and Liquid surged ahead. he then shot way past Alucard to the tune of a 40 vote lead. from there, it was all Alucard, with Liquid and Ness fighting over second place. Ness's best time was now and he couldn't even hold the lead. it looked pretty bad for him, though we all knew that everyone in this match had a bad day vote except for Ness, so there was still hope.

Alucard's lead hit 400 and then... stopped. out of nowhere, for seemingly no reason, Liquid went on a huge tear. he started cutting 40 votes off the lead with ease, and by sunrise Alucard was dying. the thought was that the new xbox/PS3 ports of SOTN would help Alucard out here in the daytime, but it didn't seem to matter. Liquid went on to take a 600 vote lead by 2pm. Ness was 1500 votes behind and an afterthought at this point.

from there, one of the hugest stalls you'll ever see happened. Alucard would tease us with a big update, then Liquid would take it all back and a few votes more. it was, dare I say, boring. nothing was happening and Liquid looked like he would hold on to his lead.

at 7pm, Alucard finally kicked it into gear. it wasn't a particularly fast comeback to start. he'd gain maybe 100 votes an hour. as the final hour came, he was still behind 171 votes. right when he was running out of time, he FINALLY started coming back with some speed.

the 23:20 update must have sent people crazy - a 50 vote cut by Alucard to 86 votes with another 40 minutes still to go. Alucard took a 3 vote lead with 10 minutes to go, and then pushed it to 17 on the second to last update. Karma Hunter was incessant with his complaining here - when was the last time a board favourite lost a close match? - and that was Alucard, on a mad tear to pull off a spectacular comeback in the last seconds.

the next match had started, but the last update had yet to come in. when it did, no one could believe it - Liquid's first update win in about 15, and JUST enough to pull off a 3 vote win. KH happily accepted his loss, everyone else took 1 point in their brackets instead of 2, and there were, of course, complaints about cheating. what else would you have in a three vote match? at least this time, everyone actually liked both guys, as opposed to in MC/Frog. people were pretty pleased despite their brackets, from what I could gather. good damn match. 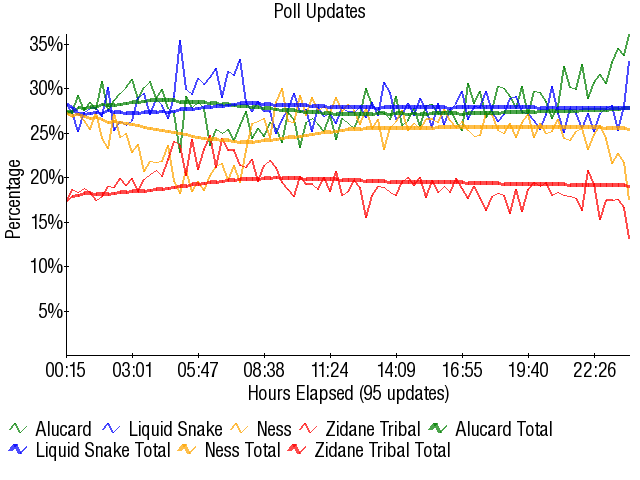 2007’s four-way format (or is it four-mat? Harrrrharrrrr) leant itself to a lot of matches with a guaranteed winner and an up-for-grabs second-place slot. It wasn’t often that all four contenders had a good chance to take home the gold, or at least the silver, but this match was just such an occasion. The consensus pick was Alucard > Ness, but Liquid Snake has that little Master Chief-esque caveat about making every match interesting, and he refused to go down quietly. Zidane knocked himself out early on, and Ness was out of commission toward the end, leaving a final stretch between Alucard and Liquid. And Alucard finally managed to pull ahead at the last stretch, and –

…wait a minute, what? Liquid managed to pull a last-minute surge out of his ass and win by three votes. That’s the smallest margin of victory in any contest, bar none. the victory is marred by the fact that SBAllen obviously wasn’t checking all that hard for cheating, but every match seems to have a little bit of stuffing on each side regardless. Still, Liquid once again did the impossible. Why do we keep underestimating this guy again?

Retrieved from "https://board8.fandom.com/wiki/Alucard_vs_Liquid_Snake_vs_Ness_vs_Zidane_Tribal_2007?oldid=67823"
Community content is available under CC-BY-SA unless otherwise noted.