Ah, Division 4. Home of the Noble Niner who broke the (four-way) Noble Nine, a rat, and a Block that threatened to doom us all. For the board, it - pretty much - all came down to Round 2, where the combined force of Crono and Ryu would steamroll the fourth piece of fodder, and ultimately knock L-Block out before it started down its path of destruction again. So even though this match was pretty much set for Crono > Amaterasu - some restrospectively HILARIOUS Kaim hyping courtesy of Lopen aside - it was important in terms of garnering information on what would be necessary to eliminate the Block.

Well, two things happened. The first was good - Crono was doing even better than most expected, and even managed not to tank his day vote too badly. The second, however, was a bit more foreboding. Amaterasu was not only stunning us AGAIN with her nonsensical strength - seriously, she wasn't even in the running for beating Little Mac and a Mii, and I guarantee you Frank West and Kaim would have been favored over her last year - but she was breaking 35% on Crono. Characters that have failed to do that over the history of the contest include Captain Falcon, Tommy Vercetti, and Dante. That was ridiculous no matter how much one might think Crono has fallen, and considering his overall performance on this pack there was only so far you could take it. Especially considering how the obvious winners had underperformed so far. Which begged the question - how were Crono and Ryu going to get enough combined percentage to kill L when Ammy was easily going to take up 15%+ of the vote?

Exactly. Things looked bleak for the anti-L bandwagon. And we hadn't even seen it in a match yet. 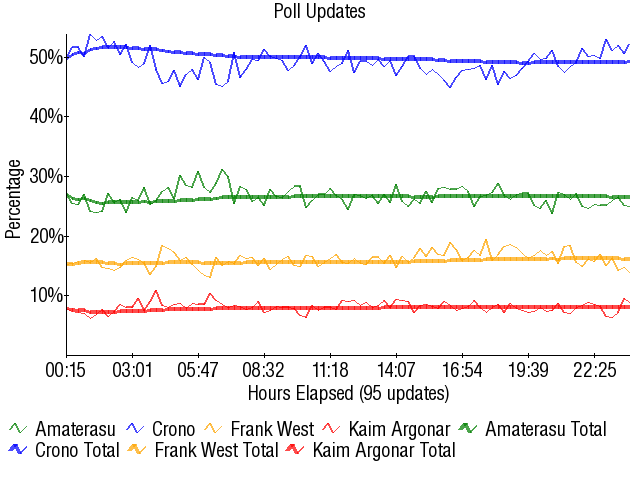 Here's another of those where neither first or second place should be in contention at any point, but which isn't a borefest because there are still some things we ought to be able to take away from the result. The main thing we'll be doing, I'm almost sure, is getting that Crono > Vincent hype train a'rollin! I don't care what anything else says: there was no excuse for Vincent to allow Falco to stick that close to him, and unless Crono likewise drops the ball in this one, I'm going to have to give serious considering to picking against my bracket when that match comes up.

Now, what kind of strength gaps are we looking at?

Pretty big ones! Ammy impressed us several times in '07, but even so, she shouldn't be TOO far above whatever fodder line you want to set up. She might be looking at something of a boost for this season thanks to Okami's pretty successful remake for the Wii a few months back, but it shouldn't matter too much either way in this one thanks to the enormous cushions she's got above and below her. As for Crono, his performance here is certainly what everyone will be keeping an eye on, and with good reason. Frog impressed a couple days back, but was that because of legitimate CT:DS excitement? If so, could that be enough to save Magus in his upcoming battle with the Sandman? Hopefully Crono puts on a show for us tonight to give us another talking point in that debate.

Frank West last year was just... wow. Back before we knew there was going to be 4-way matches, I had made Frank my pick for character most likely to come in last in the final x-stats, since I assumed we'd only be seeing 64 characters. Well he lived up to the billing, that's for sure! A percentage that pathetic, considering he was placed in the most pathetic 4-pack in history, leaves little doubt about his status as complete jobber. Fortunately that keeps things interesting, because now Kaim should have a real shot at beating somebody! I'm by no means a believer in Lost Odyssey, but despite the less than stellar sales, characters from 360 games have been looking pretty decent this season for whatever reason. Certainly it SEEMS like a game that ought to have a fanbase at this site- I mean the words "Final Fantasy" are right there on the box!

Hmm... hard to say how those bottom two will place, but in any case I'm expecting a real powerhouse showing from Crono in this one, something to send a notice that he won't be the one letting the Noble Nine down anytime soon. With that in mind and some weird numbers in the pot, we can heat for 10 minutes and get:

Not much to say!

Retrieved from "https://board8.fandom.com/wiki/Amaterasu_vs_Crono_vs_Frank_West_vs_Kaim_Argonar_2008?oldid=67849"
Community content is available under CC-BY-SA unless otherwise noted.