I encourage everyone to go look at the poll update graph if you haven't already. Ike's ASV is truly hilarious.

Anyway, this match came down to two characters - Arthas and Ike. Spy was another random piece of fodder there solely to display how bad SBallin' was at bracket-making, while Pikachu, thanks to his ridiculous run last year, was an easy favorite for first. Arthas, for his part, was back after a fantastic showing where he not only prevented Diablo from beating KOS-MOS, but BEAT Diablo outright and would have likely advanced had it not been for Diablo weighing HIM down. Ike, now with a RELEASED SSB game to his name, also had high hopes, though they had been tempered and then some by the flopping of his kindred up to this point. Ike was presumably stronger than Arthas, but he had a weight in Pikachu dragging him down while Arthas was easily the most independent contender in the match. Hmm, this sounds familiar...

Well, this match stayed more to form than the last - and after Ike's rush of bracket voting, Arthas quickly took control and rode himself through the night to an insurmountable lead. And by "insurmountable", I mean "cutting updates constantly on Pikachu until morning" insurmountable. Ike made some noise with the morning vote, but Arthas took control with the during school vote and built himself up a lead of nearly 2500 votes.

From there, the match was all Ike's to shine - and boy, if he hadn't sucked SO much during the night we would've really had a match on our hands. By the end of the day Arthas' lead was barely over a thousand, and he had pretty much pushed himself out of contention for next round unless Alucard and Falcon turned out to be MUCH weaker than expected. Despite that, he had gotten to shine, Ike did what he could in a match where a big rat-shaped albatross was around his neck all day, and Spy uh produced fodder for interesting topics yeah. The only real disappointment, I think, was Pikachu - being unable to get 55% on Ike despite having reason to SFF him on two platforms didn't bode well for the rat, and Alucard > Pikachu looked like a sexy upset.

Speaking of which, I'm pretty sure I'd take Ike > Pikachu 1v1. Where do you think those Arthas and Spy votes go, after all? 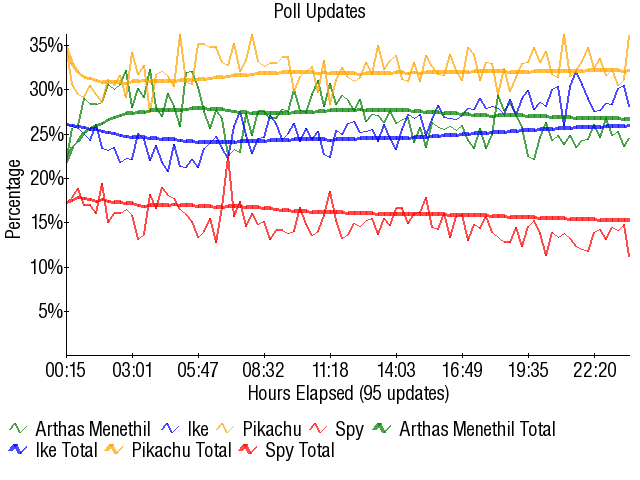 We've got another potentially super-wacky result ahead of us today! Let's hop right in.

You might as well throw that Arthas value right out the window. If you don't think that he and Diablo flat out devastated each other, and that left alone either would have crushed KOS-MOS with ease, then I'm afraid we can no longer be friends. The victory over Diablo makes it clear that the guy has a dedicated WC3 fanbase, and I see no reason for them to abandon him here. Then you add to that his being the face of the game receiving the biggest media blitz since Halo 3, AND drawing the perfect box art pic from that game for this poll, and its easy to see why I was willing to go out on a limb and make him my "upset special" pick for second place in this one.

...except as time went on Ike kept losing more and more support, until my upset pick had become the Guru consensus by the time brackets locked! What happened? Well I think that in addition to realizing how solid Arthas had performed in '07 (given the circumstances), people also started to realize what a grim situation Ike was looking at here in terms of LFF. Between Mudkip and Pikachu and Mewtwo, 2007 made it pretty evident that well-loved Pokemon from the R/B/Y and G/S/C era can hang in there with anyone in this format, even Nintendo heavy hitters like Ganon and Luigi and Bowser. And sure Ike is a Brawl casual favorite, but heck, so is Pikachu, and the guy ALSO held that title in almost undisputed fashion in both SSB and Melee. How could poor Ike be expected to perform much above the fodder line in the face of all that? I don't think he should be, and its unfortunate that what will end up being credited as 'Brawl Newcomer Weakness' will actually be, at least in this case, just a matter of Pikachu pulling from too many fanbases to be held back in this format.

As for Spy, well, Portal has already looked solid and Half-Life has already looked quite respectable itself, so I don't see why TF2 wouldn't continue the trend tomorrow. Picking him to beat an LFF weakened Ike is pushing it IMO, especially when I don't think Spy is going to perform at the level of his more iconic co-TF2er the Heavy, but I wouldn't be shocked if he hung around that level before the SSB morning vote kicked in.

In summation, I felt fairly confident about Arthas over Ike earlier today. After seeing this match pic, I'm upgrading that to "very confident." Now the fun will be in seeing where this wildcard named Arthas ends up- will the WoW regions rally him all the way past Pika to set him up beautifully for a Round Three appearance? I wouldn't count it out!

After converting those thoughts to numbers, my pot has been stirred and it produced the following numbers:

Those look so good that I'm drooling!

After a stretch of bad results there, I'd forgotten how good it feels to go out on a limb and be right for a change. I gave Ike plenty of credit but still expected Arthas to have a little too much in the tank in terms of WotLK hype and rally power to fall back on if need be, and that was correct- whoo! (What's that you say? Arthas wasn't even the risky pick there? Hey, stop killing my buzz!)

Retrieved from "https://board8.fandom.com/wiki/Arthas_Menethil_vs_Ike_vs_Pikachu_vs_Spy_2008?oldid=63193"
Community content is available under CC-BY-SA unless otherwise noted.