Everyone knew the obvious conclusion was Auron > Sub-Zero here, aside from some murmuring that Marcus might have a shot at advancing (that was shot down HARD, as we'll see). Thus, this match was all about analyzing the nitty-gritty details.

And not to go all Ulti-style retrospective on everyone here, but anyone that couldn't read Mene Mene Tekel Upharsin clear as day after this match was just hiding in denial. Sonic had Magus, a character roughly equal to Magus, and an SBallin'-grade piece of fodder in his match. Auron had Sub-Zero, a character roughly equal to Revolver Ocelot, and a character that was thought to be fodder - and he ended up exceeding expectations, and getting a significantly greater percentage on his pack than Sonic did on his.

This is made even more damning when the character that was SUPPOSED to be fodder, Rydia, decided to go out and *finally* validate the oldest theory we've had in these contests. Seriously, TJF has had a long, rocky road, but its holy grail was found in Rydia's curvaceous C-cups and we haven't let go since. She didn't just overperform, she beat MARCUS FENIX, thought universally to be one of the best newcomers from last year. Sure, that meant doing little more than beating Kefka and Ocelot (the latter in an all-day affair), but still! Sure Rydia would have never pulled this off with Amano art, but this was a victory for mammary-lovers everywhere. And more importantly, it made the pack even STRONGER.

Despite all this (and some weird ass fanart for a picture), Auron was able to near 40% here. Something was going to have to give, because if things kept up as they were Auron wasn't just looking set to beat Sonic - he was looking good to blow him away. 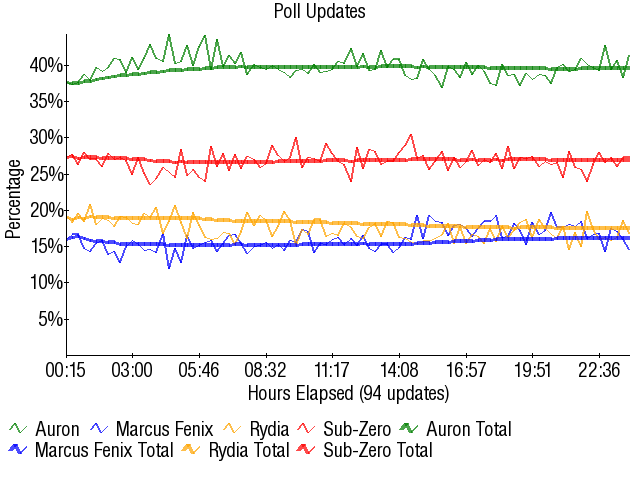 This is so wild that I have to get back to refreshing the boards and poll to see how this plays out, so let's keep this outlook on tomorrow a little bit shorter.

Actually a pretty cool match here... or at least potentially it could be. Auron will roll out to an easy win of course, but I don't think he fully cements himself as the winner over Sonic/Sandbag/Magus(?) next round, just based on the percentage he'll pull down. BUT, he's only going to appear to have had a bad showing, when in reality it will just be a matter of having to split some of his votes with Rydia, and actually he'll be in the clear once she's out of the way next round. Speaking of Rydia, I expect a pretty good result from her. Kain impressed us the other day, and I hear that Ry is decently well-liked by FF4 fans as well, which when added to her getting without a doubt the biggest pic advantage of the entire round (seriously, just wow) should spell good things for Miss Mist.

Unfortunately she was placed in such an unwinnable position. Not only is Sub-Zero a proven upper mid-carder, but fighting games have always done well in this format, plus he's the face of the upcoming DC vs MK fighter. Which... might help him a little. Then there's Marcus, another guy who proved himself as legit last year, and this time around the 360 vote has only gotten stronger, plus he's also got an even more hyped release coming right up in Gears 2. When you add the fact that all 4 of these options got awesome pics and that AURON is sharing the poll, I'm afraid I don't see any way for Rydia to stay out of the basement here no matter how much she impresses.

So an Auron win but not really a blowout, with everyone else looking pretty decent as well ought to result in something like...

What a weird year... Ryu Hayabusa explodes with the Day Vote to easily pound Zero, but now Marcus Fenix and Master Chief can't even use it to hurt FF4 characters? Maybe you could make a case for Xbox acceptance being on the rise, but only in terms of having a greater ability to attract noncommitted voters who in years past would have apathetically supported the Nintendo option they were most familiar with. If that's the case it could explain this bad result from Marcus today- between FFX and TJF and awesome nostalgic ninjas there are plenty of good choices for the casual voter here, which might have hurt his case. But MC was facing a toaster-wearing character who was barely above the fodder line last year, a FF4 character (without TJF), and Professor Layton. There's just no excuse for flopping with the casuals against competition like that, and combined with today it has me seriously wondering if more than 25-30% of the site actually cares about supporting the 360.

Retrieved from "https://board8.fandom.com/wiki/Auron_vs_Marcus_Fenix_vs_Rydia_vs_Sub-Zero_2008?oldid=67862"
Community content is available under CC-BY-SA unless otherwise noted.