Despite the Auron>Sonic result from the previous round, this match was a foregone conclusion. Auron was going to get SFF'ed by Sephiroth, and Sonic stood out from the three mature characters (AKA STF). The only question mark was Sonic's performance. Sandbag was no longer around, so if Sonic underperformed, he'd have no excuses. And for the first (and only) time in the contest, the blue blur actually performed to the levels which he suppossed to do in the first place.

Both Sephiroth and Sonic overperformed by 2%, whereas Auron was hit hard by the SFF, causing him to only have a 1500 lead on Kratos. Because of Sonic's "impressive" performance, any talk on Dante or Kirby possibly beating Sonic in the next round pretty much died after this match. That said, the division finals were over. Provided if Crono beats Vincent and Sonic doesn't choke, it looked like we would have the first Noble Nine elite eight since 2004. 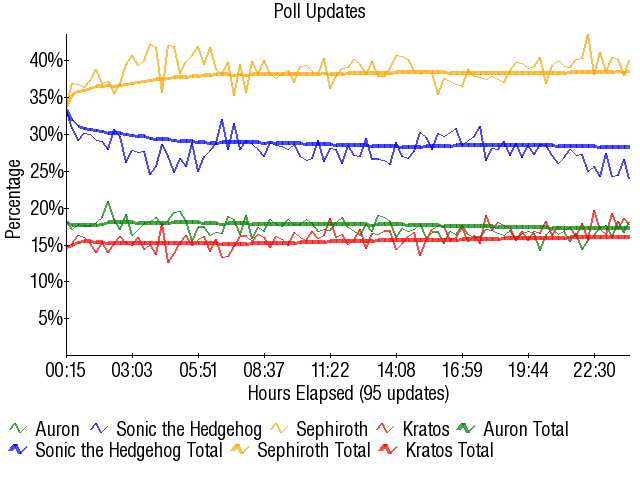 But enough venting, we've got a new, hopefully less disgusting result to predict!

I like the Subby-based numbers (especially since they result in Sandbag falling under the fodder line) but those Jill-based babies seem a touch high... she appears to have collapsed somewhat against such tough R2 competition. Can't blame her though, as these were three very daunting opponents- not even REFAQs could make up for that.

Some people are trying to come up with ways to validate tonight's match as somehow in doubt, but... eh, I just can't see it. We've already seen the kind of beatdown Seph can apply when he decides he wants to take a match seriously, and even though Auron is sure to hold up better than Tifa managed, it's still got the potential to get ugly. If that was all that Sonic had going in his favor I'd probably still be rocking this upset, but... there's a bag in the way.

Everyone wants to dismiss Sandbag as a joke and forget he ever existed, and though I understand that line of thought, I don't think it's very wise. Stupid as it was, that thing exhibited legitimate Nintendoish, SSB proxy-style vote patterns and strength. I just can't visualize something that so clearly symbolized SSB Brawl not taking a decent bite out of Sonic's fanbase. With that out of the picture and Sonic now being the one to stand out from the mature badass crowd like a cute lil' Kirby, the ball is clearly in his court. With all these factors in his favor, if that hedgehog can't take the rock to the hole tonight then heck, it'd be more embarrassing than Master Chief. And that's saying alot!

Kratos has impressed me a decent bit the last two times out, but I feel pretty confident picking him for last place regardless. His appealing character design won't win him many votes against cool customers like Sonic/Auron/Seph, the FFX star limits his PS2 base, and I get this odd feeling that Auron's somehow going to do something respectable despite the SFFing. So yeah, 4th place seems a good bet.

A big Seph win, then fairly tight races between the others ought to give us something along the lines of... *pots once and stirs twice*

That looks... reasonable, I suppose. Cloud's 50-18 beating of Auron gets me a little worried, but I've just got this hunch that he holds up way way better in this one for some reason.

Well, what do you know- Sonic can still impress! You just need to put about five factors in his favor, and about three factors going against every other option, and a solid pic advantage, and for Smurf to lose his soul to the devil, and then heck, Sonic can almost score 29% of the vote! Well that's wonderful for him, but pretty awful for me... my bracket went down the toilet last night, and now Sonic's desperately pulling the handle on my Oracle season.

Retrieved from "https://board8.fandom.com/wiki/Auron_vs_Sonic_the_Hedgehog_vs_Sephiroth_vs_Kratos_2008?oldid=63211"
Community content is available under CC-BY-SA unless otherwise noted.