Talk about making a debate where there wasn't any! Thanks to the ramblings of some posters *cough*, this match was actually argued heavily, though it was really for the sake of arguing than anything else for most involved.

But anyway - Cloud Strife is our #2 character, and he was going to be an easy pick for first in any match not involving Link. Midna was a spectacular disappointment last year, but her two opponents were Miles Edgeworth (Phoenix would be a tough upset over Midna, Edgey sadly had no shot), and Axel Steel. Unfortunately, some users thought that thanks to Guitar Hero's amazing sales and worldwide popularity that the game's most popular avatar would actually be able to do something.

And while it was really annoying and made me want to punch people through the internet on multiple occasions, what we got was the expected result in the end. Much laughter was had as Axel failed to garner even 8% of the vote, but other than that this match was as boring as it got. The only two things to note is that Midna did a smidge better relative to expectations than we expected, and that unlike last year Cloud wasn't really trying to compete with Link on a performance level. Seriously, Axel/Midna/Edgeworth is less credible opposition than Luke/Shadow/Zidane, yet Cloud got a lower percentage against the same pack. Cloud's hopes of winning the contest rested on Samus or Mario getting through to the finals with Link, and aside from the obvious SFF problems, at the moment there was an L-Block in the way. 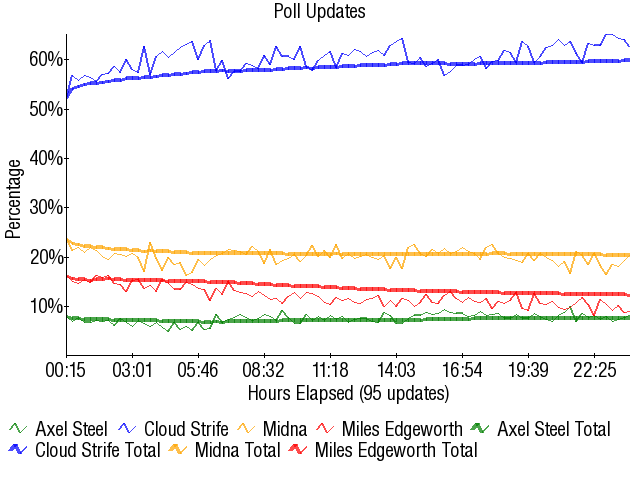 As for today... like I said in that Snake writeup, there's something weird going on this season that seems to be hamstringing all of our elite performers. They're not looking BAD per se, they're just all disappointing ever so slightly. But today will be the day where Cloud finally snaps the streak of "meh" with a powerhouse performance! (Of course I said the same thing about Snake, and look how that turned out!)

Back in the day:

For a match where the winner will never be in doubt, and most likely second place won't be either, this is actually a highly intriguing poll IMO. You've got a proven stud in this format attempting to fan the flames of that Nintendo deboost bonfire and show us all that he could be a legit threat to Link this season, if given a little bit of help. As noted, I do think he's going to be the first of the NN to do something to really wow us this year, but alot of that will only happen because the rest of this group is so heavily Nintendo. Even GHIII has done over 50% of its sales on the Wii. ...I think. Don't quote me on that! Unless it's accurate!

Midna on the other hand is a real oddball. She got chalked up as a bust in '07, which I don't think was fair- ZELDAFEAR aside, how far above above the fodder line could you really expect someone in the Navi mold to perform? That being said, it seems possible for her to turn into an actual bust this season, now that the TP effect will have worn off by another 13 months. If that happens, I don't think Edgey should be entirely counted out for second place. Yes, he was awful in '07, but the poor guy got the worst possible draw in that one, wedged between The King of All SFF, Jokemon personified, and an even MORE niche Nintendo handheld option (who'd have thought that was even possible?). I'd imagine the PW series distances itself from the Twilight Princess crowd far enough to give us a much more accurate representation of Edgeworth's strength this time around, and I'm excepting that to result in a pretty healthy improvement.

Despite the other two being so up in the air, the true "wildcard of the group" status has got to belong to Axel Steel. I'd like to just dismiss him entirely, because who really cares about your onscreen avatar when you're playing Guitar Hero? When you're strumming away on GH or Rock Band you're not playing as Axel Steel, you pretend that you're playing as yourself, thrashing through a sick solo and melting the crowd's faces off. That's why there's been such a big drive for player customization in the genre, and why RB2 and GHWT give even more options in that area. HOWEVER, there's still a small possibility that this goes down as the most important Pic Factor of R1, because look, there he is on his guitar; can't miss it! Thanks to that very appealing look, voters should have no trouble recognizing him as "that guy from GH"... but aside from that hardcore group of rhythm game lovers, could there really be another 20% of the site who prefers it over FF7 and TP and PW? I wouldn't think so, be we've already seen crazier things happen in the past three weeks!

With so much up in the air, it's tough to get it all back into the pot, but I've done so and here were the results:

Another day, another slightly (not hugely, just slightly) disappointing performance from an overwhelming favorite! The trend this year isn't NintendoFAQs, certainly, but as today shows it's also not SquareFAQs. And despite what some overly dramatic purists might be saying, I don't think its fair to call it JokeFAQs either. Sure WCC wowed us, but it's not as though whichever character has the strongest "joke appeal" or stands out the most from the traditional character options is seeing a significant boost in every match. If that was ever a theory, it was certainly disproven by Tim and Sackboy and Axel Steel, and most likely Travis will continue beating that now-dead horse tonight. If there's any trend at play in '08, it would appear to be anti-favoriteFAQs. Extremely odd occurrence, and something we'll definitely have to keep an eye on as these matches continue to play out... for the sake of our Oracles if nothing else!

Retrieved from "https://board8.fandom.com/wiki/Axel_Steel_vs_Cloud_vs_Midna_vs_Miles_Edgeworth_2008?oldid=63125"
Community content is available under CC-BY-SA unless otherwise noted.