What a difference a year makes, huh? Last year the big debate would've been between Balthier and Scorpion for first, with a few gung-ho Valvers chiming in for some Gordon Freeman upsets. Well, one Balthier bomb and Scorpion impressing later, and we end up with an easy Scorpion > Gordon pick, with pretty much zero chance of an upset on any side of the table.

Well, it didn't really end up that way. Gordon jumped out with his usual awesome board vote (seriously, we're so used to voting for the lovable loser we've forgotten how not to)... but he wasn't losing it. An update later Scorpion cut him, and the next he was ahead by 1 vote, and it looked like gravity was taking over despite the board's love of Mr. Freeman.

Then Gordon jumped out to an 84 vote lead, and all hell broke loose.

Somehow, some way, Gordon, who had lost as the favorite to DUKE NUKEM and nearly lost to pre-Brawl IKE, was giving Scorpion the fight of his life. For one glorious night vote Gordon was able to nurse a small lead until the day vote took hold... at which point he ended up losing by barely over 2000 votes. The universe saved for the moment (seriously every time Gordon comes in first it's destroyed and a new one is created, ask TRE), the inevitable showdown for next round looked ROUGH for Scorpion, especially if the showdown went down anything like Duke/Gordon II last year. Plus, there was Falco to think about in that whole mess. Suddenly Vincent/Falco/Scorpion/Gordon was one of the big matches of next round.

In this midst of this awesome whirlwind were Balthier and Big Daddy's performances. For the former, you really had to give it to Balthier for at least minimally exceeding expectations, although he's got a long way to go before he's even talked about in the same breath as the Zidanes of the world. And Big Daddy did well enough for me to conclude that Gordon probably wins this match outright if he's not here. C'mon Orange Box/Bioshock SFF you know you want some !! 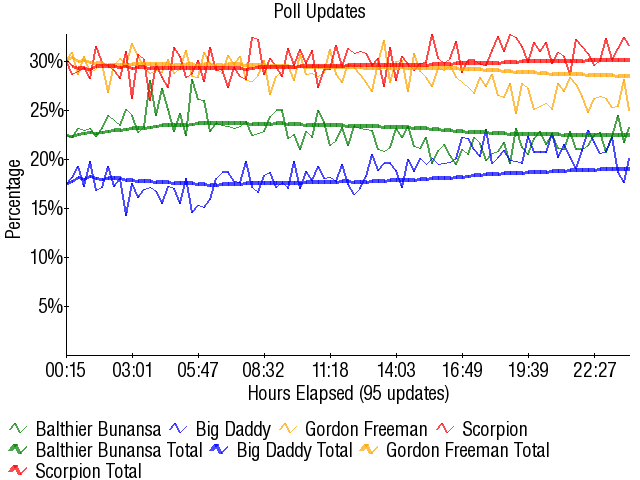 Today we should be in for another good one. Three characters that are at least somewhat comparable in strength plus a newcomer who should have a pretty wide range. Let's jump right into it!

I'd never bought into Mortal Kombat too much in these Contests, but between that upset of Master Chief and how good both Subby and Scorp looked last season, they've made a believer. Actually pretty much everything connected with fighting games had solid showings in '07, and I don't see any reason for that to change this time around, so even though I don't think he's going to run away with this group as easily as some are predicting, I still can't see him being challenged for the win.

Big Daddy is one of our more exciting entrants IMO. Between the critical acclaim, Game of the Year awards, and the very positive reviews I've heard from most gamers, I'd have to imagine that Bioshock is going to have a strong core of support backing it all the way, much like GlaDOS did. Unlike GlaDOS, though, the big poppa ought to have considerable promise as a "joke character" on top of that. By joke I mean, his name is funny enough in itself, and then you look and its a giant mech kind of thing, whoa! Should have some decent casual appeal for those voters who don't feel strongly about any of the other choices (and considering Balthier and Gordon's past history, that could be quite a few!). I'm not going to do anything crazy and pick him for second outright, but heck, we've seen stranger things happen already this Contest.

Balthier was a flop in '07, I don't think anyone really denies that. He was supposed to be the next Auron, and instead looked like the next... uh, Cecil or something. And that was when FF12 was at its peak! Even so, I think he's going to have something of a chance here. Zack and Zidane have already impressed, and also, couldn't Daddy and Freeman share something of a fanbase? Moody, atmospheric, really good FPSes that are available on both the PC and the 360... I wouldn't call a huge overlap likely, but again, we've seen weirder things happen, and Gordon certainly has a history of allowing the slightest bumps in the road to throw him off course. Overall though, between the success of Portal and TF2 and the Orange Box helping HL2 reach something of a new audience, GF ought to have enough in the tank to pull this one out. So why can't I get rid of this nagging doubt?

Alright, but what happens when you translate those thoughts into numbers? With a little potting and stirring, THIS happens!

Gosh, do I ever feel nervous about those numbers though...

Man, GlaDOS alone was enough to get me nervous about WCC crashing the party... now we see that the Orange Box has turned even Gordon Freeman into a stud overnight? DK and Tidus better bring their A games if they want to advance out of that one! Which could be trouble, as I'm not sure either of them have A games anymore.

Retrieved from "https://board8.fandom.com/wiki/Balthier_Bunansa_vs_Big_Daddy_vs_Gordon_Freeman_vs_Scorpion_2008?oldid=67848"
Community content is available under CC-BY-SA unless otherwise noted.