First, a hearty "what the HELL" at anyone that thought Olimar had even the faintest glimmer of a shot at Nero. The kid might be the "Raiden" of the Devil May Cry series, but even Raiden beat Sam Fisher and I assure you, Olimar is no Sam Fisher. More importantly, Mega "I CAN STILL OBLITERATE NINTENDO FODDER Y'KNOW" Man was in this match, and anyone that didn't think an effectively Brawl-only character wasn't going to be SFFed into the dust was deluding themselves.

Okay, to take a less judgmental tack, this was all about seeing how our only newbie, Nero would do, as well as take measure of Mega Man's strength - calibrated for obvious winner underperforming, naturally. By that measure, Mega Man actually didn't embarrass himself, though looking at what, say, Crono had done a week ago, it just didn't measure up. It was definitely the weakest Noble Nine performance so far, and though SOME people pounced and refused to let go (<_<), it was still NN caliber.

Meanwhile, Nero did what he was supposed to do - put up decent numbers on Mega Man, kill Olimar and Banjo. Banjo even got a tiny ray of sunlight by not coming in last, though that's just really to say... get the **** out of my contest, Brawl. Seriously. 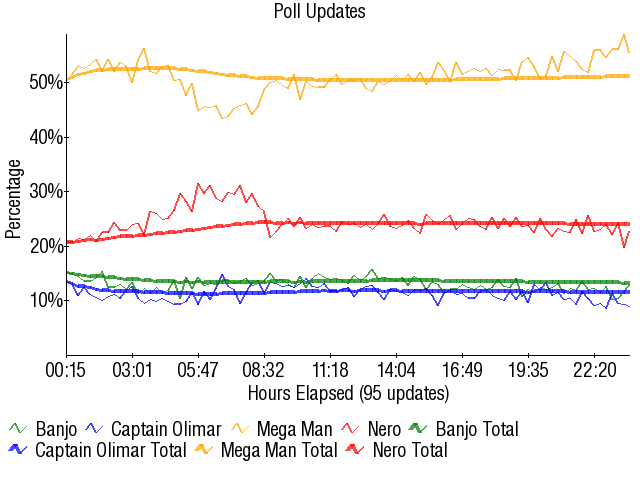 The one hope for the non-jokes is that Nero pulls off something pretty incredible here tonight to make himself a favorite over the Cube. But considering he'd need more or less a Dante-like performance to do so, it's not looking too likely! Let's see what we're up against in this one:

Like I said in the MMX match writeup, Mega Man was as solid as a Rock(man) all the way through the '07 bracket, doing pretty much what we expected of him every time and even impressing us once by giving Samus more than she bargained for in the sprite round. I see no reason for that to change here in 2008, especially not with this match taking place at the height of MM9's popularity (it hit the 360 three days ago and is now available worldwide for all three consoles... and the sales figures have been extremely impressive, at least in North America). Had MMX collapsed I might be worried, but nay, he did well for himself and so I think MM and Zero are safe from a series-wide Sonic Team-style tumble for at least one more year. The only point of concern is that with Mega Man acting increasingly Nintendo in recent times, Olimar and Banjo might hold him back a little and allow Nero a better showing than otherwise, but honestly I can't see that being much of a factor considering neither of those characters have any NES/SNES presence.

Nero's something of a wildcard, except... not REALLY. We can probably count on him to perform somewhere in the general 16.71% range that Vergil set up last season. I'd probably have set his ceiling a little bit lower before I saw the match pic that was chosen for tomorrow- that's basically the perfect picture for Nero, as he looks almost identical to Dante and gets to hide his ridiculous oversized demon-grabber arm. Between standing out so well in the picture and being the lone non-Nintendo option, I'd be very surprised if he allowed either of his opponents to seriously contend for the 2nd place position.

As for Banjo, should we perhaps revise our thoughts on his chances after seeing what happened a few days back? Fox crushed his fourpack in '07, making the rest of that group look somewhere in the range of pretty bad to extremely bad fodder, and yet Captain Falcon wowed us all by putting on a great show against Alucard, proving that Fox's SFF was even more deadly than we expected. But, uh, nay. Banjo's GOT to be worth more than the 11% he earned, sure, but I doubt MM's presence does him any favors in this one, and it's going to take a major flop from Olimar for him to stay out of last place tonight.

That leaves only the good Capn't to consider. Could he be the one to shock us just like that other Captain did a few days back? Again, sorry, but I don't see it happening. Sure Olimar was one of the guys who should have received the most notable Brawl boosts, but just look where he was starting BEFORE that boost. If you replaced MM and Banjo with say Auron and Crash this might be the kind of thing where I'd take a flier on the upset of Nero, but as stands there's just too much working against him in this grouping, and I can't see the little guy having the kind of strength needed to swim upstream against odds like these for very long.

Sooooo if MM is strong and Nero is meh and Olimar is ugh and Banjo is ewwww, then...

Oh man, no matter how I tweak this one it still keeps coming out looking just awful based on my gut reaction. All of a sudden I've lost alot of confidence in this pick.

Darn it! DARN IT!! I just can't beat these Marios! And the video game tournament is tomorrow!

Retrieved from "https://board8.fandom.com/wiki/Banjo_vs_Captain_Olimar_vs_Mega_Man_vs_Nero_2008?oldid=67853"
Community content is available under CC-BY-SA unless otherwise noted.