When the bracket was first released, this thing was an afterthought - for many, many reasons. Jinjo and Lucas are two of the most fodderific fodders that have ever graced the contest, and that's BEFORE Kirby gets thrown into the equation. And Kirby was just a teensy bit below the near-elite tier while Big Boss, as much as he impressed as Naked Snake last year, he hadn't even garnered 60% on Magus. Y'know, the same Magus that let Phoenix Wright lead him for half an hour. There as SFF to think about, but the characters were so weak as to have it be inconsequential. Even IF Big Boss were to get his Naked Snake picture - which wasn't assured - Kirby would have it in the bag. *I* waited until the last day to pull the trigger on this upset, and even then I wasn't particularly confident in it - unlike the Magus smashing.

Well, Liquid breaking 45% on Luigi and the Deboost Parade put a lot of eyes on this match in a hurry. And when the picture was revealed - seriously, that pointing Snake is better than most of the pictures Solid has received in the contest - you could feel the bottom on the Kirby train drop out like a sack of potatoes. That being said, nothing could prepare people for what was to come next.

At the first freeze, with the early Kirby-heavy board vote and everything, when the dust cleared Big Boss clearly had already pulled the massive upset and put the match away - he was up by 70 votes, with 41% of the total vote to Kirby's 37%. The next update? A 207 vote lead, and over 42% of the total vote. By the end of the hour he was over 45%, by the end of the night vote he had hit 49%, and he finished the match over 48% and killing the Kirbster by 15,000 votes. Big Boss put up bonafide Noble Nine numbers, numbers more befitting of Solid Snake than a character that had been tripled by Auron in his first contest outing. And Kirby had next to no excuses - both of the two fodder in the match were under 10% of the vote, with Lucas in particular well under 6% of the vote (with that in mind, a hearty "lol" for Lucas, an even bigger SSB leech than Ness).

At this point, people were wondering if Big Boss could make it through NEXT round, despite Raiden being there to sap his MGS support. There was also the quite legitimate point that predicting Big Boss was getting to be like playing a game of roulette - why did we have to base our predictions on the luck of the draw picture a character would be drawing each round? Then again, this was pretty much just another example in a long line of Really Dumb Things this contest would do for the sake of unpredictability, and as much as I enjoyed this match I couldn't help but think, "Man, this contest really sucks."

But, train wreck, powerless, etc. There was nothing to do but chin up, look forward, and prepare to complain even harder! 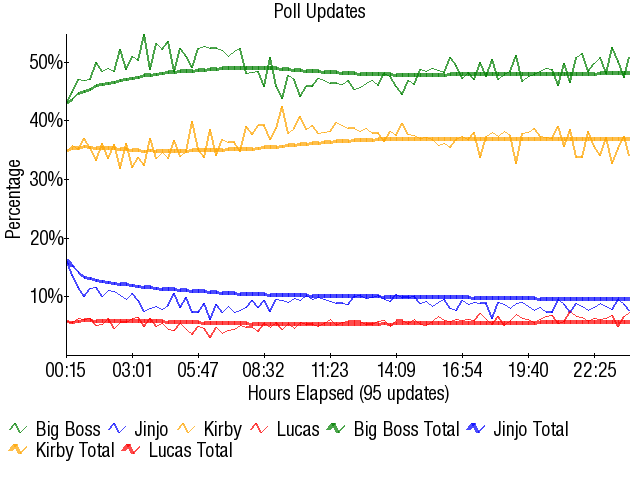 To me the most shocking stat relating to this match is that only 17 Gurus picked Big Boss for first place. That's less than 8% of the field willing to go out on a limb and select a guy who we knew (post-user pic creation announcement, that is) was going to get an awesome pic advantage to defeat a character who would be facing double Nintendo LFF. The same character who got owned handily by Kratos last season, when having to deal with only single Nintendo LFF. I mean I'll give Kirby something of a break for the whole L-Block thing being unfortunate, but even so, he didn't even manage 45% of the vote directly against Kratos in a match most of us had been expecting to be neck and neck. And given Donkey Kong's embarrassingly enormous flop the other day, recent results haven't done much to increase Kirby's stock around these parts. We've seen what even a not exactly well-loved character like Pac-Man can do when he gets to stand out against three Nintendo opponents- given all these trends, and with Big Boss looking like that in the pic, I've got to feel that the ball is in his court for this match.

Now that being said, I've got to admit that I give Kirby a much better chance at the win than I did about 48 hours ago. See, the last time BB scored this pic he earned 25% of the vote against Mario, Magus, and Phoenix Wright; obviously much stiffer competition than he'll be facing tonight, so he would seem to be a lock for a take in the low 30s. Trouble is, Ness has disappointed me so much today that I'm no longer so sure that Lucas is going to be able to hold Kirby back whatsoever! I mean, going from Ness to Lucas you lose Melee, you lose SSB... you even lose an Earthbound that has actually been released in this country for heaven's sake! If Mewtwo can score 70% on Ness directly as he's doing today, I see no reason why Kirby wouldn't put up 75% on Lucas... and that could spell serious trouble for Snake-lite.

The other thing that has shaken my confidence is Jinjo's picture. A green Jinjo, on a green background, right-side up? Noooooo! I was counting on Zen's upside down picture to get the go ahead in this one, which would have screamed "hey casuals look, this here's a joke character!" Can't guarantee that would have turned him into a joke powerhouse or anything, but eh, I'd have liked his chances much better if he could have grabbed people's attention like that. As is, I can't see the Jinjo meme being worth enough to keep him too far above Lucas. We're likely in for a highly pathetic 3rd place, 15-10%ish rumble to avoid the basement in this one. And again, all the extra percentage being up for grabs should prove to be a major advantage for Kirby- and a major disadvantage for my bracket.

(BTW, did I mention that 2 of those mere 17 who picked this BB upset ahead of time are me and yo? Well, it's true! *sends a disastrously overconfident pre-match high five yo's way*)

Okay, soooo, if Lucas and Jinjo have bad showings, then in order for Bossy to pull off this upsets we're going to need a result somewhere in the range of...

Bah, I like how far ahead of the curve I was in calling for this upset a month back, but here in the last hours I'm starting to get cold feet. Oh well, soldiering on!

Hooo boy, what a crazy showing from BB today! HOWEVER, people are going way overboard in terms of what this result will mean the rest of the way. I'm hearing ravings about "the death of Nintendo" (just absurd) and "massive MGS4 boost" (uh, hello, did you see Snake drop the ball only a week back?) and "Big Boss to win the division alongside MC!" Sorry, not buying it. The best way to explain this result in my opinion is by observing that not only does BB look great, he also looks almost EXACTLY like Brawl Snake, with the addition of an eye patch. It seems as though casual Smashers though they had the choice of three characters, and since it's very much a case of Snake > Kirby > Lucas within Brawl, that's how much of the undecided votes were swung. In any case, the trouble is that even if there has been a massive MGS4 boost, that's only going to work against BB in R2, in the form of Raiden. Let's not forget that Nintendo isn't the only company that suffers from LFF- next time around Kirby will be on the right side of it, and I bet that's more than enough to swing the results back in his favor.

Retrieved from "https://board8.fandom.com/wiki/Big_Boss_vs_Jinjo_vs_Kirby_vs_Lucas_2008?oldid=67858"
Community content is available under CC-BY-SA unless otherwise noted.