The Board vote is the idea that Board 8 is able to significantly determine the results in the early going of Contest matches. During the 2004 - 2005 era, when matches began at 3am EST, there was some definitive truth to this theory. B8 was able to create leads large enough to allow CATS to hold off his opponent for 5 to 10 minutes (or even for hours at a time, after the huge lead B8 pushed him to in his '05 matchup with Ansem), and at the end of the '04 Game Contest the Board was so fed up with FF7 domination that they launched Chrono Trigger out to such a lead that it was able to run even with the FF juggernaut for 90 minutes.

However, with the new poll time moved ahead to midnight EST in the modern era (2006 and on) then midnight UTC in 2018, the opening vote has become so diluted that B8 is barely able to make a dent in the early results, at least past the first 2 to 3 minutes.

The Board Vote Strikes Back Edit

Where the board can still make a major difference is at the end of close matches. With the casuals already having had 23 hours to have their say and most normal people heading to bed, voting usually slows to a crawl in the final hour of a poll. In a heated finish, this allows B8's rally power to have a significant impact on how things play out heading down to the wire. Many of the most famous successful rallies revolve around Frog (including his '07 comeback on Axel), but the board also famously pushed Mario ahead of Crono in 2003 and Snake out in front of Sephiroth in the 2006 Battle Royale.

The Board Vote In Action Edit

Frog finishes up a terrific comeback against Axel in 2007, with a little help from his friends. What's that you say? The blue line at the end looks a tiny bit suspicious? "Pish posh," says B8! 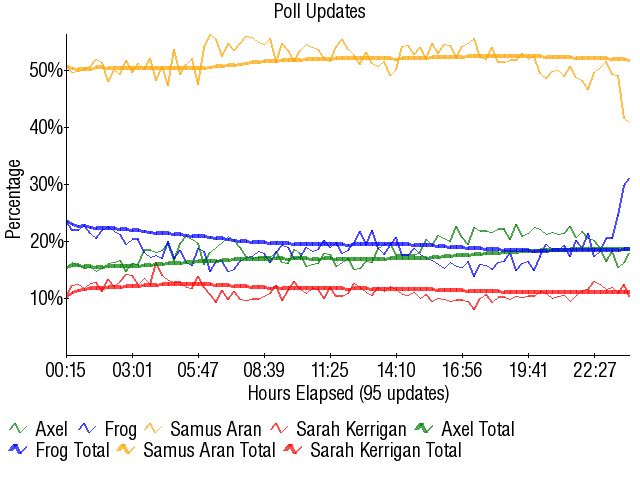 Retrieved from "https://board8.fandom.com/wiki/Board_vote?oldid=83631"
Community content is available under CC-BY-SA unless otherwise noted.