After the prior day's more or less expected result - in placement, if not percentages - things had pretty much calmed down on Board 8. Facilitating this normalcy was, of all things, a Phoenix Wright match.

Phoenix is best known for being three things - firstly, arguably the most beloved character on Board 8. Secondly, for being the character that finally ended GFNW (and man, Gordon's looked impressive since then). And thirdly, he gave us one HELL of a show in taking down a washed-up, third tier icon in Bomberman. But hey, that's an icon nonetheless! With his jokey trends there was some chatter that Geno had a shot... but as good as Geno is in SMRPG, one character arguably stole the show even more than he and he was in the SAME MATCH. Meanwhile, Deckard Cain was yet another random piece of fodder that I'm told is from Diablo. And if you're a Blizzard character that isn't in the title of one of their games, then well...

Bowser dominated as expected, and the fact that he didn't fall flat on his face was a welcome relief for his fans that have had to cringe at every one of his matches ever since his near-upset of Solid Snake. Bowser certainly couldn't be written off against Luigi, especially considering how vulnerable Liquid had made him look, but theirs certainly appeared now to be a fight for survival than bragging rights. Phoenix actually held up quite well, and Geno ended up having to hold off a scare from Deckard. The only real surprise is how far Phoenix had come since 2007 - whether it was the flurry of his games or his upsets spreading his notoriety around a la Chrono Trigger, he was less joke and more natural, legitimate trends. 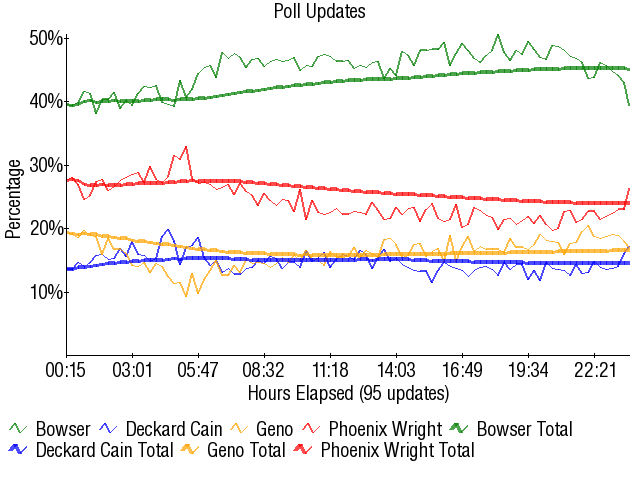 Bowser's number in the first round was a total crapshoot, what with Mewtwo and Toad doing heaven knows what with the Nintendo support. This number is based on his R2 showing, and it's probably pretty accurate- the guy has still got some legitimate strength, and his loss was more a matter of Auron and Ryu being perfect characters for this 4-way format. I'd expect him to perform at around that 26 level tonight, or perhaps even a little higher because...

Phoenix Wright is a character that I don't think holds up very well against Nintendo's upper tier. We've seen him cave badly in the face of Mario, and Edgeworth got blown away worse than we expected by Link, so although Bowser's not nearly at the same level of SFF-ability, I'm still not expecting PW to look his best here. And then poor Geno got about the worst placement possible- as someone who just finished up a Virtual Console playthrough of Mario RPG, I can safely say that despite how cool Geno was throughout, Bowser consistently stole the show in that party. I DO feel he was held back somewhat by Squall and Aeris last time around (no way would I pick Akuma to beat him that badly 1v1), and sadly he probably won't have much chance to improve on that 15 here in '08.

Then there's Deckard who... nay, sorry, just can't muster up any excitement about his upset abilities. To be a successful "joke" character in this format you have to make it very clear that you LOOK like a joke to the casual voter, IMO. L-Block just looks ridiculous to everyone, and that grabs people's attention and swings votes his way, whereas Cain just looks like any other old man from an RPG, so I can't see him picking up many votes outside of the DII fanbase. That being said, with the rest of this group swinging so heavily Nintendo, he SHOULD have an opportunity to at least look somewhat decent. And by that I mean... better than Kerrigan. Maybe.

Let's turn those thoughts into numbers, turn up the heat for 90 minutes, and we come out of the pot with...

After two fairly standard results in a row, you just know that the bracket must have another surprise in store soon.

Retrieved from "https://board8.fandom.com/wiki/Bowser_vs_Deckard_Cain_vs_Geno_vs_Phoenix_Wright_2008?oldid=63117"
Community content is available under CC-BY-SA unless otherwise noted.