This was it. CATS had waited a long, long time, but he had finally spotted the perfect foe against whom he would finish ahead of in a match. DARKNESS and Jokefodder had finally evaded him, but here, against this PS3-exclusive character, victory would be assured. Oh, and yeah, there was also the little matter of Squall v Yoshi.

Despite the overwhelming consensus in favor of the FF8 protagonist, most genuinely felt that this would be a close match between the emo and the dino. After all, Yoshi had beaten Dante and finished ahead of Squall in 2006 - and Solid **** or not, that was impressive at the time. The next year Squall clearly had the edge as he nearly upended Sonic twice, but considering how weak Sonic looked and how good Yoshi looked that year even when masked by SFF... in essence, even with the "deboost", as we had unoriginally coined it, Squall/Yoshi still looked like it could be interesting.

Uh huh. That was before Yoshi decided to choke on his own egg shards and make Squall look stronger than Steroid Snake.

It's hard to appreciate exactly how shocking this result was to the majority of the observers on the board, even when you look at the close Oracle spread for this match. Yoshi was SUPPOSED to be one of the Nintendo near-elite. His name was spoken in the same breath as Ganondorf's, Sora's, and Zelda's. Yet for 24 painful hours he laid egg after egg as Squall eviscerated him en route to a repeat of Squall/Luigi 2k3.

There were really no explanations for this debacle. Yoshi stood out like hell, was the only even vaguely Nintendo option in the match, and was so pathetic that many were suddenly contemplating the idea of SORA moving along next round with Squall. As for me, this match is what exemplified the deboost - Mario characters gained the most with the 2k5 Boost, and now they were feeling the brunt of its reversal.

But hey, at least CATS finished ahead of someone in a match! woo CATS 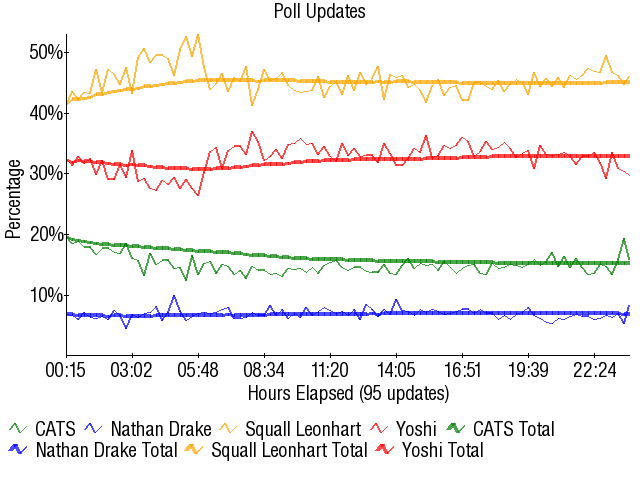 Now we move on to another match where a strong Square guy ought to likewise finish 5ish points ahead of the not-quite-as-strong Nintendo option. But far from being dull, this is actually a pretty interesting setup for a very odd reason: we might be in for a classic battle... for third place! Oh boy!

As we well know, both Squall and Yoshi are studs in general, but especially in this format. Y has got strong credentials- he owned Knuckles with ease, refused to cave to Mega Man, and even the combined N appeal of MM and Samus didn't kill him entirely. And yet, Squall's creds are even better- he smashed Aeris, beat up on Sora, and very nearly "broke the Noble Nine" by edging out Sonic in that crazy L-Block poll. If Yoshi is able to pound Fox with SFF hard enough, I give him a great shot of sneaking ahead of Squall thanks to Sora most likely putting up a better fight. But here in the first round, where both should be unhindered and performing at full strength? Nay, can't see Yoshi taking a serious run at him, although he should be able to use the Day Vote to look plenty respectable.

The real slugfest here will be for that meaningless Bronze Medal, as I hinted earlier. CATS is hard to peg... clearly he's got a strong fanbase of around 10% that will support him over anyone, and clearly you'd think that a guy like him could excel in this format, but we heard these same arguments back in '07. Some even were able to keep a straight face while picking him to upset both Meta Knight and Peach... whoops! You'd think we'd have learned our lesson, but with this being The Year of the Joke Character, can you entirely count out the Godfather of All Jokes? I don't know, but one thing I DO know is that I'm not going to be counting on Nathan Drake to be worth much of anything in this format, or any format for that matter. Uncharted reviewed well enough, and apparently it eventually sold over 1 million, but adventure characters have never struck much fear in my heart. PS3 adventure characters, with generic names and looks from new series that hardly anyone on the site will have played? Yeah, CATS sure seems to have an ace up his sleeve here. And yet... it's CATS.

Yes sir, this is certainly a toughie. In the end though I think I'm going to put my faith in the joke, though in reality it's more a case of putting my lack of faith in the PS3. And when you put that in the pot and stir slightly, the result is

Think of it like this year's Phoenix/Bomberman. You see my drift! Delicious.

I'm still going to go on record as being a firm disbeliever in this so called "Brawl de-boost", but I've got to admit that after the past two days I can see why so many are beginning to hop aboard that wagon. To me though this doesn't look like a Yoshi underperformance... our mistake in this one was giving any credit whatsoever to Nate McFodder over there, and I think if we would have known going in that he'd only be worth 6 or 7 or whatever he's at now, it would have been pretty natural to chalk most of the missed percentage from that PS3 "star" up to the ACTUAL star of the PSX and PS2. That's an advantage Squall won't have going for him in R2, and so even though I'm glad I didn't pick the Yoshi > Squall upset after seeing these last two days, I still feel that those making Sora > Yoshi > Fox out to be a near-lock are being much too hasty in calling a result that's still very much in doubt.

Retrieved from "https://board8.fandom.com/wiki/CATS_vs_Nathan_Drake_vs_Squall_Leonhart_vs_Yoshi_2008?oldid=67856"
Community content is available under CC-BY-SA unless otherwise noted.