This pack was watched *really* closely as soon as the bracket was announced, because as Dante and Leon were famously responsible for letting the Worst Upset of All Time happen, there was a lot of speculation as to whether it could happen again with Riku. 45% on Yoshi in 2006 was nothing to snicker at (well, before a few days ago), and he had made up for a poor showing against Ryu Hayabusa with a good second round win despite Solid Snake being in the match. Heck, there was a niche sentiment that Riku had a shot at upsetting Leon in THIS match, and even those that thought otherwise knew Riku would perform respectably.

But it would seem, at least, that Chris' and Yoshi's performances would both be harbingers of things to come. Leon just annihilated Riku from the beginning, and even the vaunted KH day vote did almost nothing to limit the damage. This was one of the more shocking beatdowns we'd ever seen between two characters, and the only thing that made it marginally less so was the fact that Squall had dismantled Yoshi a few days prior. Suddenly it looked like Dante > Leon was going to be the favorite prediction next round. There were a few crazies (hello) that were verrrrrry quietly floating a Leon upset of Dante, but even they were pretty sure that was a pipe dream.

Lastly, the two pieces of fodder in this match - Siegfried is notable only in the sense that he's the only entrant in the contest to get in under two names (and that he's much weaker than Nightmare), and Captain MacMillan was confused for the Swamp Thing for most of the match. That means he's using his camo properly, people! 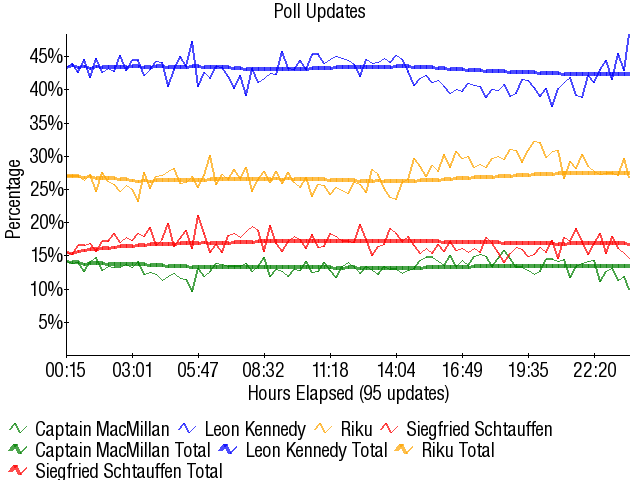 Looking ahead to tomorrow... hm, now this will be a tough nut to crack. Let's start by seeing how far the acorn fell from the tree last time around.

As I said, what an odd couple of characters. Who's the real Leon, the one who easily crunched Vivi and then Pikachu, or the guy who folded like a house of cards the minute Dante showed up? And who's the real Riku, the one who looked like total junk when Square SFF was in play, or the one who looked awesome in going toe to toe with Ryu H and Kratos once badass SFF arrived? Given the way Chris stunned us by doing better than awful the other day, I'm going to have to side with Resident Evil continuing the growth trend its displayed since RE4 and give Leon the benefit of the doubt here. That being said though, I'm betting that Riku does a better job of keeping it close than most are expecting, especially as he shouldn't have any serious competition for the ASV tomorrow afternoon. New Square has been putting up plenty of solid showings, and Sora's was just about the best of them all (although its entirely possible that I'm letting that pro-Fox bias get to my head again), so I'd still call it a mistake to count Riku out entirely.

But wait, MacMillian is a 360 character- surely he'll draw strong ASV support as well! Uh... have you SEEN him? The guy's only in one CoD4 level (or so I hear) and you can play through the entire single player campaign and not even remember him (again, or so I've heard)- basically the guy looks like a walking joke, and he should perform like a walking joke, getting pushed out to a decent start by 4chan or whatever other internet weirdos find that seaweed hilarious before collapsing the rest of the poll. (Apparently there's even a listing of "Captain MacMillian Facts" out there somewhere, which makes his fad what, a ripoff of a ripoff of a not all that original idea in the first place? Yeah, I'm not expecting huge appeal across the board for this guy.)

Siegfried, hmm... yeah, not expecting him to make too much noise either. People seem to have gotten over their SC4 excitement pretty quickly, I don't see the game having given the series the true jump start it needed to become relevant again site-wide. As for Nightmare, I think much of his strength comes from his ridiculous character design and awesome name, while SS both looks and sounds much more generic. Plus he didn't get a huge sword to swing around in the match pic, drawing in casuals with every stroke.

So if Leon's legit (until a scary fellow Capcomer arrives!), and Riku's legit (but not QUITE so legit), and Siegfried is pretty bad, and MacMillian is just awful (past the first 90 minutes), then we're looking at something like:

Gracious, you're got to put Leon right up there with Sora and Squall in that small list of characters that actually impressed while finishing first. I suppose it's not all that crazy- this is the same Leon that scored a 40-30 on Vivi, and I'd certainly have expected Vivi to be stronger than Riku in this format... but not THIS much stronger, especially considering how the Magician and Seaweed-wearer ought to have had more in common with Mr. Kennedy. Maybe everything RE will just keep gaining steam until RE5 hits? I didn't realize hype levels were this high.

Retrieved from "https://board8.fandom.com/wiki/Captain_MacMillan_vs_Leon_Kennedy_vs_Riku_vs_Siegfried_Schtauffen_2008?oldid=67860"
Community content is available under CC-BY-SA unless otherwise noted.