Last year's Round 1 was only a warmup. THIS was the most debated match of any contest's Round 1, ever. In all honesty, it will probably always will be. It was easily debated more than ANY other potential match, period - other than the natural continuation of it NEXT round.

And of course, it was all due to one character - Mr. Buster Sword, Black-Haired Cloud, the TRUE hero of Final Fantasy VII - ZACK FAIR. (aka Zack UNfair, Zack Attack, aka "I'll Crisis your Core"). This one character, given all of about five minutes of screentime in FF7 - most of it in optional, out of the way sequences - and his own game on that juggernaut of portable systems, the PSP.

...okay. So with any other character, Zack being uber-fodder would have been a given. But because he had the FF7 pedigree, because he's the spitting image of Cloud and bore his sword, and because Random Piece of Final Fantasy VII furniture would probably have won the contest this year, he was given all the consideration in the world, and then some.

There were some that warned of him being the next Balthier, or worse - some had Zack so low as to fall to Cecil. Most had him losing to Wario here, and Zack vs Shadow was considered THE match of Division 1. Get it right, and you get who got out of the division correct.

Well, after enough discussion that even thinking about it now still brings on a migraine, the match was at hand. And upon looking at the picture, Zack had everything going his way - not only did he have the Buster Sword prominently displayed in his picture, it's probably more accurate to say his picture WAS more the Buster Sword. Zack had zero excuses.

...and he didn't need them, because he started off the match on fire and didn't let up. Wario, who advanced to Round 2 last year behind Fox and getting his debut in SSBB, got absolutely CURBSTOMPED en route to a routing, and the first big conventional wisdom in the contest - BrawlFEAR - was suddenly in terrible doubt (funny how since I popularized that term, none of its subjects have really warranted the terror, huh?). Zack, despite Cecil in the match, looked better than even his most ardent supporters had expected - and that luster would only glow brighter once the rest of the field started performing. But that would be seen later. Wario, for his part, had no excuse - no matter how strong Zack was, the only Nintendo option in the match should look somewhat good, right?

The last thing to note about this match was how Cecil did - absolutely pitifully. This was perhaps to be expected considering what he did last time, but between FF4 DS and him having a more recognizable picture this time, it was perhaps not unwarranted to expect more. And after what the rest of FF4 did this contest, I have to postulate that Zack had a pretty fair (oh I slay myself) amount of overlap with Cecil here.

That was downright scary. The rumblings began - could he make it into the semifinals? Against Mario and Mega Man X?

Time would only tell. 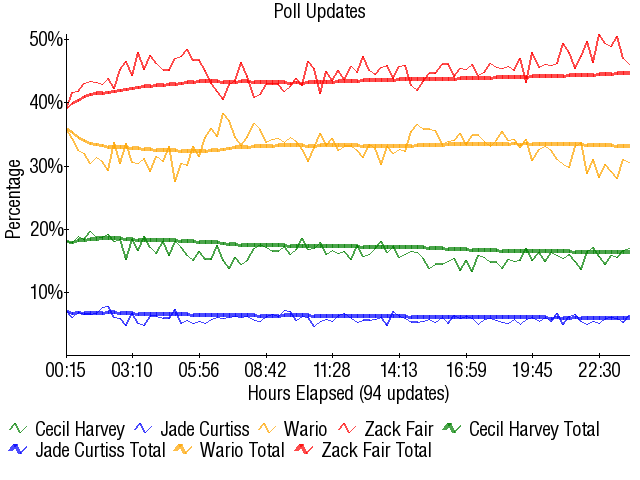 Wario's a chump, and everyone knows it. But he has a few things going for him here... he's out of those suspenders and into his (slightly) cooler biker gear, he's been in Brawl since we've last seen him, and most importantly he sticks out like a sore thumb against all these long haired efeminine J-RPG leads. When you're Nintendo, there's nothing better than being able to stand out in a crowd!

Weird to predict Zack for second, as he's going to ride Link's wake all the way through to the final of this division according to my bracket, but as I explained, he's bound to be held back by having so many other Final Fantasy/RPG options in the lineup. So even though I think his Buster Sword and Looks Like Cloud advantage should be enough to easily defeat Cecil, Wario should have just what it takes to edge him.

As for Jade, pffffffffffffffft. There's never been a character in history we needed to see less than Jade. We're talking about a guy who managed less than 8 and a half percent against Balthier, Ada, and Frank West, a guy who is quite possibly the weakest entrant we've experienced since Tanner Himself. Why anyone would expect him to score more than 8% here is beyond me.

So with those points in mind, these percents pretty much create themselves!

And there you have it. Looking forward to another exciting season!

Ouch, Crew season is only just underway and already we've made a mistake! Well, I think our readers had better get used to it- even assuming the joke characters don't rise up and sting us, this is an extremely tricky bracket that I think will be full of surprises right down to the wire.

Retrieved from "https://board8.fandom.com/wiki/Cecil_Harvey_vs_Jade_Curtiss_vs_Wario_vs_Zack_Fair_2008?oldid=67843"
Community content is available under CC-BY-SA unless otherwise noted.