When this match was set up in the bracket, there was a fair bit of speculation as to whether Fox would be able to pull off the upset over Sora here, thanks partially to a gigantic Brawl influx and partially due to him being hidden behind SFF for pretty much his entire contest career. Needless to say, by the time this match actually rolled around more people were wondering if Tim could capitalize on some kind of joke vote to upset Chris Redfield (who had lost to Pyramid Head last year) than any Fox > Sora buzz.

The real point of interest in this match would end up being neither scenario - instead, whether it be due to him standing out like a madman in the picture (1 red team badass vs 3 blue team cutesys), kooky Survival Horror rSFF, or just the strange commodity we would come to coin REFAQs, Chris had the match of his life this day. Fox would end up closer to Chris than he would to SORA, and during the night Chris would shred him repeatedly on scores of updates. I suppose you could say Fox did okay during his first true non-SFF outing in forever, but Chris made it look much, much worse than it could have. He ended up further from Sora than most expected as well, but most observant users expected that by this point.

The last thing of note here would be Tim's performance, and he made a strong case for being the flat-out weakest character of the contest here. Clearly I have to try out Braid now, as its indie cred is through the ****ing roof after this showing !! 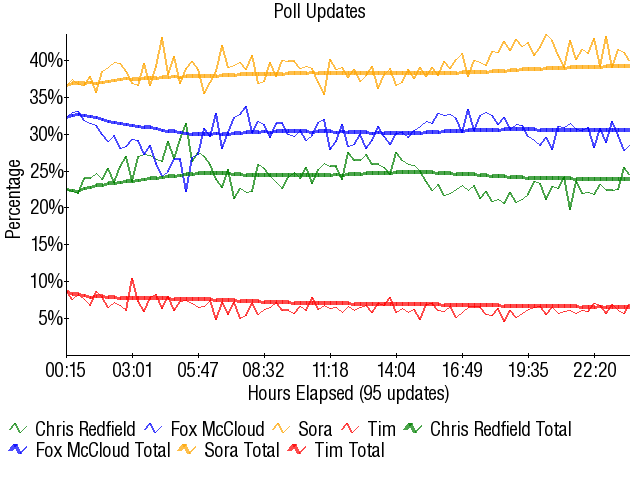 Who's ready to see another awesome showing from a member of Team Fox? Me! And my bracket!

I picked against the Guru cookie cutter in a total of 16 of this year's 63 matches- a decent number of upsets, at least by my standards, and now the one I felt least comfortable with has arrived: Fox > Sora. I've always had a strong dislike for ol' clown shoes and Fox has become a favorite of mine thanks to his considerable potential that always gets hidden behind SFF, so when I saw a chance for him to finally perform at peak strength my gut reaction was to jump at it and take Fox for the win (as I did in my Initial Impressions topic). I took plenty of heat for that decision, which only made me more stubborn and forced me to stick with the silly pick right on through lockdown. But you know what, looking at it now, I'm glad I did! Yes Brawl newcomers have disappointed for the most part, but Fox is a mainstay of the series, Star Fox 64 has done great on the Virtual Console this year, and if being the only Melee/Nintendo option allowed Falco to snatch up that many votes against a guy with legit NN-smashing potential like Vincent, I see no reason why Fox couldn't knocked out someone a good deal lower on the Square totem pole.

Plus, check out this picture! Not only does Fox dominate everyone and get another super-cool pose like R1 last time, Sora gets stuck with his back to the fans, puffing away on that Virginia Slim! For those who say it won't matter, have you forgotten that the victim of (arguably) the biggest pic factor underperformance in history was... Sora himself? Now some others are saying that Chris will do well with this pic, but again I'm not buying it. Sure it's an improvement on that goofy look from last year, but in my experience realistic-style pictures fail to draw the eye away from bright colorful foxes with their arms crossed in a no-nonsense expressions nearly 87% of the time. And Tim, well... he DOES look pretty good, but this is one of those cases where he'd probably have performed better if he looked more like a joke- as vocal as the Braid fanbase is, small numbers like that can only take you so far.

In summary, the KH ASV figures to be as deadly as always, but if there's one thing that can stand up to it (well, aside from Halo) it would have to be SSB Melee. I think Fox will be able to get a large enough lead overnight and during the school that he'll be able to limit the afternoon damage and take this one home with a close finish decided by the second night vote. Whooo Fox!

Hmm... well my upset didn't end up working out, but at least Fox validated himself as a legit Nintendo mid-carder with this performance. This should end any debate about him finishing behind the Donkey Kong's of the world, and it's cool that in only a couple weeks we'll be able to see how he stacks up against that higher tier that Yoshi represents. Actually this was a dang good showing for him- he put up a very strong fight during the ASV and it was actually his best time during the whole poll, which is incredible considering how easily KH has owned that timeframe ever since 2005. If only he hadn't fallen apart so badly overnight, we could have had a real match on our hands here. Darn those Europeans!

Retrieved from "https://board8.fandom.com/wiki/Chris_Redfield_vs_Fox_McCloud_vs_Sora_vs_Tim_2008?oldid=67855"
Community content is available under CC-BY-SA unless otherwise noted.