Had Bowser not gotten punked by Ryu twice, he would be in Ryu's spot here and be the main beneficiary of Cloud SFFing Auron. Bowser and Auron both went against Cloud in 2003, and Bowser did better against him. But Ryu beat Bowser this year (twice), so he basically advanced past the divisional final by default. He actually won the board vote and led outright for a few seconds, and it only took him 15 minutes to shake off Auron for good. This was a predictable match by the time it rolled around, because whoever won between Bowser and Ryu was guaranteed to advance here. Most of us just screwed up and picked the wrong character among those two.

Notable here is Cloud getting close to 50% in a fourway poll in round 3. That's Link Lite stuff right there, and obviously the format wasn't going to screw over the elites all too much.

Bowser was supposed to be here, but Ryu had ruined that party twice already. Auron won round 2's much-hyped matchup with relative ease, though, making people question if Cloud being in the match with him would even alter the result. after all..

Auron didn't lose by that much more than Bowser, despite it being a clear inter-company matchup. Auron did do pretty damn well last round, making some question if he, not Vincent, were the strongest Final Fantasy character not named Cloud or Sephiroth. Oracle predictions for this match were pretty damn even, suggesting a tight match.

but nope, Cloud showed his power once again, and the Cloud > Link hype train grew and grew. three straight matches, three impressive results. Cloud had yet to disappoint, and he was not letting anyone come even close to him.

Marcus got crushed here, but he was in the presence of real strength. pretty good contest for him. 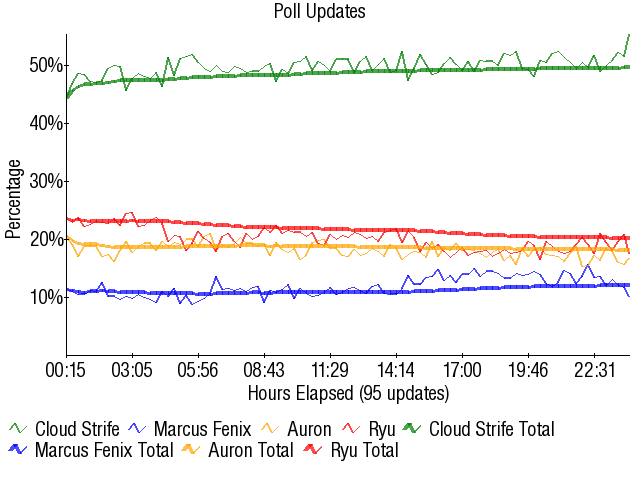 Retrieved from "https://board8.fandom.com/wiki/Cloud_Strife_vs_Marcus_Fenix_vs_Auron_vs_Ryu_2007?oldid=66623"
Community content is available under CC-BY-SA unless otherwise noted.