So anyway, this was supposed to be THE easiest match of Round 2, with the POSSIBLE slim exception of Samus/Nightmare/Ganondorf/Frog, and even there some rambling existed on Samus SFFing Ganondorf enough to let one of the other characters in on a win. But this...

Midna was one of the biggest bombs of last year, surpassed perhaps only by Balthier in her suckiness. Mewtwo gave Bowser a scare last year. This wasn't supposed to even be close. Yet in a single stroke, everything about last year seemed to be turned on its head in a new light. Mewtwo coming close to Bowser wasn't so much the Poke impressing as it was Bowser putting up another massive disappointment. Ryu's victories over Bowser made him look a lot more cracked up than he actually was, and his near-miss against a SFFed Auron and just rolling over against L-Block twice was indication of this.

Let me be clear. Midna and Pac-Man did what they were supposed to do in this match, which was to get similarly fodderized by Cloud. Mewtwo, on the other hand, the character among whom the lamest of Pokemaniacs still cream themselves over, was letting her come within striking distance. A character whom SCORPION had decimated twice, mind you! And since both were extremely close to Pac-Man... it's hard to say it, but Mewtwo proved to be the next in that seemingly endless parade of casual fueled characters folding to real competition. Suddenly, that Sora to the quarterfinals chatter got REALLY loud - even SFFed, could this stinker really pull it out?

The other thing to take away from this is that you just do not mess with Zelda on the SFF chain, even if you're dealing with their absolute bottom of the barrel entries. Mewtwo probably takes a more comparable strength entry like Wario much better. But the bottom line here is that this would be Cloud's sole match in which he appeared to be clearly on or above Link's level. And seeing as how virtually no one gave Cloud a chance in the finals (without Mario, at least), that meant that these three were pitiful. Who the heck takes Zack/Zidane/SFFed Wario to be decisively above Mewtwo/Midna/Pac-Man pre contest? 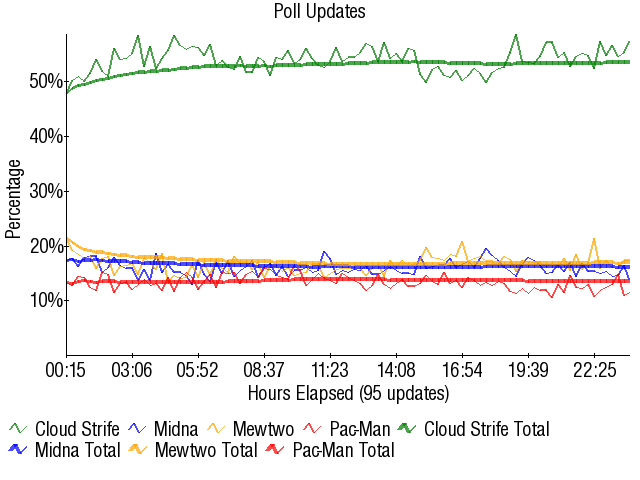 Okay, moving on to a match that kind of looked like a dud not too long about, but that now... who knows?

Whoa, what a messed up set of stats. Clearly Edgeworth got owned by Link and Bidoof last season and so Cloud/Midna deserve to go much higher, which in turn puts Midna very easily above the fodder line. People would probably have argued that, given how mad they were at her last season, but after the way she held up on Cloud, there doesn't seem to be much room for debate. Ness in turn was undeniably awful this season, whether from a Mewtwo SFFing or whatever else, which makes sense because there's no way Pac is THAT far over the fodder line.

Now conventional wisdom tells us that Cloud destroys this whole pack while Mewtwo in turn destroys Midna Ness-style, turning the poll into a mere pillowfight of the jobbers for third place. But has conventional wisdom EVER been right this year? Cloud blows everyone away and scores around 50%, that much should be a lock. But beyond that I'm starting to have totally ridiculous nightmares about that 2 spot...

What if Mewtwo can't lay the SFF hammer to Midna? I mean, he looks like total garbage in the pic (seriously, will that look appeal to ANYONE, aside from Area 51 conspiracy enthusiasts?), Midna's sporting a pretty cool devilish grin, and why would Pokemon be able to hurt Zelda anyways, especially when they don't have SSB in common? Meanwhile Cloud's pulling another of those anime styles that is currently doing wonders for Sora, and the higher his percent climbs the better the independent/more hardcore backing for Pac should allow him to look. Plus he looks good in this picture, and is running out the classic Pac-Man title screen font that should make him more appealing to older voters.

How's this for a Halloween horror story: Cloud explodes overnight and posts a Link-like number in this poll, Midna's cool look and Zelda appeal turns this into a Fox/Yoshi style rSFF affair, Pac takes full advantage and eats the largest portion of the pie, slipping past Mew into the next round. ...where he runs into Steroid-Cloud utterly annihilating Squall and Sora while leaving his old school/iconic fanbase untouched (speaking of that old school base, remember that Pac will be showing up to the dance in his original sprite form for the first time ever!), pushing him through to the most undeserved Round Four showing since... Pac-Man, in 2002! Ahhhhhhhhhhhhh! (Oh wait, actually it was SCORPION who made R4 in '02. Anyways, same idea!)

*deep breaths* No no, that scenario is just too horrible to imagine. Got to stick with my bracket and the "sensible" Cloud > Mewtwo pick. Still though, I'm thinking both Midna and Pac come out of this one looking better than most are expecting. Let's throw these numbers into the pot, toss in some candy corn, stir for a few minutes and bring out

That looks... pretty spooky! Come on Pac, give us all a good scare tonight!

Shoot, so close to seeing a classic. This was sure to end up as one of the closest wire to wire matches in history, and there was even a decent possibility of Midna riding a Zelda second night vote to victory, but then Mewtwo messed everything up by finally doing something in the match with the ASV. Well I was right about Cloud tearing it up and right about Mewtwo underwhelming... too bad Pac collapsed to wreck that part of my pred (although I guess to be fair, he at least looks great in relation to Mewtwo). Mew performing to Oracle expectations here would have been enough for me to rubber stamp his spot in R4, but as is we're left with NO IDEA who will be coming out of that one alongside Cloud... I've heard arguments for Sora, Squall, and Mewtwo, and any one of the three is a legit, reasonable guess at this point. Should be awesome!

Retrieved from "https://board8.fandom.com/wiki/Cloud_Strife_vs_Midna_vs_Mewtwo_vs_Pac-Man_2008?oldid=67869"
Community content is available under CC-BY-SA unless otherwise noted.