A lot of interesting things were going to happen here. Cloud/Sephiroth is never good for the latter, and Cloud would take some SFF damage, thereby putting him within striking distance of Steroid Snake, who was going to walk into this match high on overperformance. And then there was Kirby/Sephiroth to watch. Woohoo!

The Nintendo Power Hour yelled out as soon as the match started. Kirby was beating Cloud. Granted, that's reasonable, and wasn't going to last long, but the FF7 fanboys had to be crying over it. Dignity -1 for Cloud. But, not even the NPH could overturn Solid Snake. The guy got a vice grip on the lead and never let go.

Kirby later folded to Cloud, and after that it was never in question as to who was getting through, although the order still could be debated. To get the unimportant point out of the way, Kirby made Sephiroth look like dirt--SFF takes no prisoners in the 4-way format, and Sephiroth is not immune. From a vote ratio of 1.67 in Sephiroth's favor to 1.41 in Kirby's favor is a testament to the power of split fanbases.

However, the real show here was Cloud's inexorable march towards Snake. Cloud is the #2 guy in the Noble Nine by most any account, and he wasn't going to let this Snake guy get in the way of that. Well, math got in the way. anyone here know what an "asymptote" is? Imagine Cloud is the function, and Snake is the asymptote. That's it in a nutshell. Unfortunately for Cloud, he didn't have infinite time. The match was going to be over when the clock struck midnight, and Snake never showed any real signs of a breakdown.

Cloud's climb eventually leveled off simply because he wasn't going up in anything other than percentages. He won a few updates here and there, but every time he did that, Snake would come back and take the votes right back. The lead just couldn't be cut down below 300 at any time, and with the two having a tango of practically equal vote incomes, Cloud eventually settled in second place. The match could have lasted another day, but there was no way anything significant could have happened beyond this point without rallies or cheating. Either way, cue the Link > Snake ruckus for the finale. 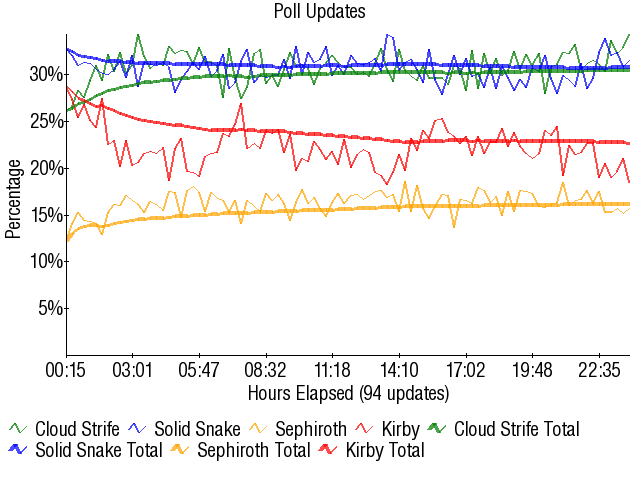 Speaking of which, time for another match featuring Captain Wacky himself- Kirby! Will The Little Puffball That Could be sending his fans home happy once again? Let's see what the stats say.

For the third round in a row I say, Kirby you beast! Like the last two times though, you have to call this result very much into question. No one seems to know what in the world happened to Sonic, but however you explain that he was clearly nowhere near his 2007 level of strength and so Seph and Kirby both need to come down about three notches. The Mewtwo values are surely closer to legit, though even there I hesitate to put too much faith in a guy who went from Chump to Champ and back to Chump again in three straight matches.

Even lowering Kirby to 35%ish looks absurd, I'll admit. But then again, consider the competition- he's once again getting the ultimate in Sore Thumb treatment, standing out big time as the lone cutesy/cartoony bright pink ball of Nintendo against three very grey/drab realistic mature Sony stars. And two of them share the same game! And if there's anything to those persisting rumors of "FF7/MGS SFF", Kirbs could even be considered the outright favorite! Right? Sooo... why am I not backing the upset? Two things: Snake's newfound Nintendo support post-trailer, and the beating Big Boss laid down on Kirby back in R1. The only justification I've been able to make for that crazy result was that because the casual Brawl totem pole goes Snake > Kirby > Lucas, that's the way the poll ended up playing out. That being the case, nothing's going to save Kirby here... still, no shame in third place!

One upset shot down- time to back the other! After all, Snake stayed within 9% of Cloud in a fair match last round, so once Seph is thrown into the mix FF7 will surely be weakened enough that Solid's hardcore fanbase will be able to push him into a first place finish. Right? Uh... hate to say it, but I'm going to have to back down from this upset as well, badly as I'd like to see it. Yes, Seph's going to bring Cloud down to his level, but now I can't help but see this surprisingly resilient Kirby likewise throw some LFF around, and all it would take is a Brawl-style 1 or 2 percent and the upset hopes would be dashed. So great work in getting here Kirbs, but I fear you may have doomed Snake in the process!

As for Kirby/Seph, eh... give me Kirby. Anything could happen there really, but with the way that guy has been swallowing opponents left and right it just doesn't seem wise to bet against him.

Cloud >~ Snake >> Kirby =~ Seph. Sounds like an Instant Classic! I'll give it a classic scoring of *stirs and pots and stirs some more*

That looks... mighty tasty! But come on Snake, pull it out!

Awwww man, my boy Snake providing an awesome capper to an awesome Contest right now. People have been bashing this season ever since the bracket first came online and we saw how 4-ways were returning, and I've never thought that was fair. Sure, I can understand how badly we all want to see 1v1 games, but to let that overshadow all the really fun, really strange results we saw out of this bracket isn't too cool. And today is the biggest highlight of all IMO, as this crazy Snake upset means that your 2008 Contest Champ is... creativename! The $500 couldn't have gone to a better or more deserving guy, even though he's actually way more concerned with the Oracle (which he is ALSO going to win this year, for his much-deserved first #1 finish). Paratroopa is going to win the Guru, which I'm pretty pleased with as well- I trust him to make an excellent Game nomination choice. But if you don't, be sure to pester him into picking your own choice!

Retrieved from "https://board8.fandom.com/wiki/Cloud_Strife_vs_Solid_Snake_vs_Sephiroth_vs_Kirby_2008?oldid=67876"
Community content is available under CC-BY-SA unless otherwise noted.