The contest gods willing, this was going to be another easy match to start off Division 3. Samus was in the upper echelon of the Noble Nine, and has looked golden in every match where she hasn't had run into Nintendo or taken off her clothes. Her only debatable match this year looked to be escaping an upset from Vincent when Ganondorf was in the poll in Round 3, but other than that she just had to look good and cruise - at least, until L-Block potentially came along in the quarterfinals.

Meanwhile, everything else in this match seemed to be set. Nightmare may only be from the third most popular fighting game on GameFAQs, but he's easily the most popular character from it and can hold his own for the most part, even with his ridiculous pictures. Crash Bandicoot's days are long gone, and the fact that we could get impressed by him coming back on Bomberman and Phoenix Wright last year says it all there. And Raz was another random piece of fodder, albeit one that I'm vaguely familiar with (woo Psychonauts, thanks Mercs!).

The only really interesting thing in this match is that Samus actually met expectations, as pretty much every Ninty character up to now had faltered in some way. Granted, the expectations had been calibrated due to those failures, but still. Nightmare had a hiccup or two against Crash some updates, but comfortably beat him down all day. Raz spent all day fighting to stay over 8%. Samus looked good for next round, and Nightmare didn't do nearly enough to justify a potential upset against Ganondorf. Other than that, there was nothing notable about this match other than the poor votals that Samus always seems to drag in with her. Hmm... sigh. Could we bring back Division 1 now? 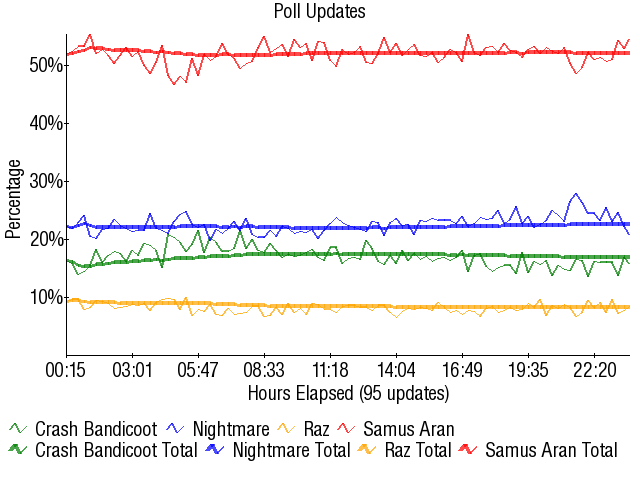 This is, unfortunately, one of the least interesting matches of R1. Psychonaughts may be great, but that still doesn't make Raz one of the more intriguing newcomers of the season, and we've already got a pretty decent bead on Crash and Nightmare's strength from last year. I guess something to watch for might be that this is Nintendo's first true chance to shine so far this season- sure Link and Mario have already come through, but there were serious LFF questions in those matches making it impossible to say if they underperformed. Samus is top tier for the company and shouldn't be facing anyone who can hurt her here, so a strong showing could go a long ways toward reassuring those currently fearing an '08 Nintendo drop.

Let's start by seeing where these characters would have dropped from, shall we?

Samus was one of the top performers of last season, though no one remembers it because her path was so predictable. She never showed any signs of weakness (aside from that one sprite match with MM, but come on, she looked like a toilet) and actually beat out Sephiroth pretty handily in her final match. With no other Nintendo option to limit her appeal here, I'm expecting a big time performance from the bracket's top female.

Nightmare's a bit of an oddball. He held up impressively well against Snake in R1, but then fell off the face of the earth when Ryu H and Riku were introduced to the equation the next time around. He must be one of those guys with enough recognizability to draw in the apathy votes, but who few people actually like enough to support when given other options. Between that and SC4's release still being pretty fresh in people's minds, I'd except him to look more like his R1 self tomorrow.

Crash actually looked fairly decent in his last match, but any semblance of strength people might be gleaning from that result is a mirage, as far as I'm concerned. Yes, he tore it up with the after-school vote, but that was purely a product of Bomberman, Phoenix Wright, and Magus being some of the worst ASV candidates these Contests has ever produced. I'd be shocked if this washed up Bandicoot was able to make similar noise against decent options like Samus and Nightmare. And as for Raz, well... sorry to those who love the game, but we've seen these kind of super-niche characters in action before, and they're almost always "worth" about 10 on BL- not seeing any reason for Raz to be an exception to that rule.

With those numbers in the pot, slightly tweaked, and stirred to perfection, we get...

Nothing wrong with the occasional slight breather like today provided, but still, it's good to be back into the realm of debatable matches!

Retrieved from "https://board8.fandom.com/wiki/Crash_Bandicoot_vs_Nightmare_vs_Raz_vs_Samus_Aran_2008?oldid=63201"
Community content is available under CC-BY-SA unless otherwise noted.