This match was all about confirming the inevitable. L-Block had beaten Ryu LAST round, and with the Street Fighter icon now playing second fiddle to Chrono Trigger's main, L-Block was going to advance with laughable ease. In fact, if you weren't in denial and looked at it objectively, L was the 'smart money' to take first over Crono.

But something happened here, and it would verify what Mudkip had already foretold. The board vote opened up on the match with Crono and Ryu enjoying the briefest of leads, with Ryu getting beaten easily and Crono just inching ahead of L. Considering how anti-L the opening five minutes were considered to be, it looked like the Block had the match all wrapped up right then.

But the next update saw a Crono surge to a 72 vote lead. And it didn't really slow past then - 170 votes by the half hour mark, 419 by the hour. This was during L's undisputed best time, mind you - and from there he just began a percentage collapse all day, ultimately finishing under 28% with the lowest percentage of his contest career.

Yeah, Ryu was never really in the match. But he only got beat by about 5500 votes, and considering that we were expecting the God-killer free of splitting fanbases with The Dog... in essence, this was the first match in L's entire contest career where he disappointed expectations, and it was very odd to watch. As well as being pretty boring - no exhilaratingly crazy board vote that allowed him to put up a big lead on Solid Snake as early as Round 3, and all the finals magic seemed to be gone.

Unfortunately, the best avenue of taking out L also seemed to be gone - Ryu was the second strongest in this division, easily, and with him out of the picture and a mound of SFF awaiting until the finals, L had plenty of time to pick up steam between then and now. It sucked for the board - the Block finally looked beatable, and no one was there to capitalize on it.

And finally let's also throw a shout-out to Amaterasu, who really needs to get in one of these things 1v1 and see if she can be a good midcarder. Still one of the craziest unexpected strengths I've ever seen - what a picture and dedicated fanbase can do, eh? 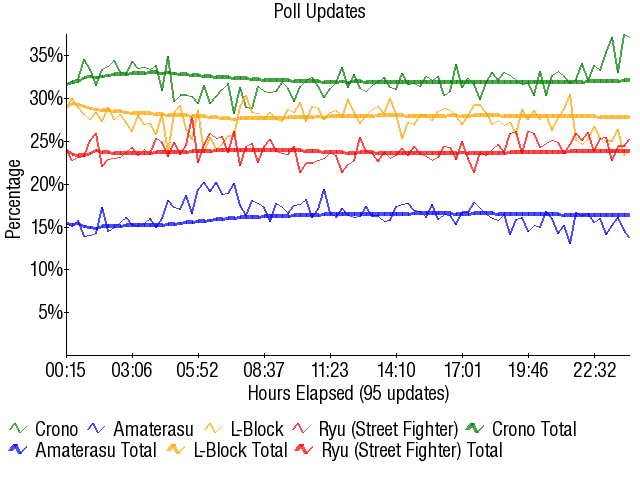 Alright, so, we come to it at least. A month back this was unanimously agreed upon as the most important R1 matchup, perhaps in history. If only Ryu had been able to capitalize with the SNV and sneak out a victory there, we might be talking about this as the most significant R2 tilt of the season. As is... no one seems to be able to muster much hope.

Those MK-based numbers look pretty decent, but clearly Frank West vastly underperformed in that awful fourpack last season, because there's no way I'm accepting Ammy that far beneath the fodder line. Anyways, Crono > Ryu > Ammy might as well be set in stone but the question everyone needs answered is, which of those gaps does L fall into? Now, I've been talking for a while about how the joke characters might be weakening before our eyes, while at the same time the favorites seem to be returning to a more normal level of strength. The "evidence" is that despite the Block looking fantastic, WCC was weaker, Sandbag was weaker yet, Hogger was pathetic (just a little LESS pathetic than those other two!), and other character with potential "joke" appeal like Jinjo and the Sackboy have instead fallen on their faces. Also, there seems to be a definite resurgence for Chrono Trigger this season, which ought to give Crono fans a bit of hope. Unfortunately, there's still plenty standing in the way of an L-Block elimination here:

Oh wait, forgot to mention Mudkip's major collapse! After what we saw in 2007 I thought he would have had a much more static, joke-supported fanbase, and instead he fell apart. So yeah, there are reasons to bet against a Block win in this one, but I'm not going to jinx it by picking it myself. Taking the Block for the win, but will be rooting my face off for Crono and Ryu all day! Let's throw those points in the pot and see what we get after a little stirring.

That looks... awful. Come on voters, win back my respect- drop that Block like it's hot!

Okay, so, this was the match where us Gurus almost unanimously agreed that L-Block would be meeting his maker. But... it didn't happen, and in fact, it happening was never even a real possibility, so by all rights I ought to be distressed. And yet... L-Block finally lost to someone, and its got me all smiles! Not only did he lose, he only won a single 15 minute update against Crono (at about 7:30 this morning) while Ryu has already topped the Block in 7 updates and could very well be scoring more before this match concludes, as he's sporting a darn impressive SNV right now. On the down side, L gains a major advantage in the next debatable match where Crono and Vincent will most likely be Square-SFFing each other. But on the plus side the idea of his having a completely static joke vote has been shattered just like it was for Mudkip early this round. Also, the trend of jokes weakening continues unabated... perhaps it will keep up, to put Crono far enough ahead to outlast him in R4? *crosses fingers*

Retrieved from "https://board8.fandom.com/wiki/Crono_vs_Amaterasu_vs_L-Block_vs_Ryu_(Street_Fighter)_2008?oldid=63131"
Community content is available under CC-BY-SA unless otherwise noted.