Alucard was a bit out of his league, and there's Crono SFF'ing him into the floor. Everyone knew Crono was going to get first, and Alucard last, but the tango between Pikachu and L-Block wasn't so easy to guess.

After the initial smackdown that occurred between the Pokemon and the Tetris piece, it was pretty clear that Crono > Pikachu was set in stone for the rest of the day, even if the block looked to be within pixels of the pokemon. L-Block dipped just a few percentage points from its normal value, but that turned out to be its undoing. This came totally out of the blue, and can't easily be explained, but it definitely involved a large antipathy vote against the Character Battle VI champion. Pikachu acted as the tool to remove L-Block.

Another possibility is an SFF phenomenon, in which a chunk of L-Block supporters voted for Pikachu instead--perhaps these were people who played Pokemon Yellow. In any case, L-Block's percentage over 24 hours always followed a sort of flipped square root curve, whereas Pikachu often hits a minimum percentage right around three or four hours into the match and goes generally uphill from there, with maybe one other valley. When L-Block is going down, Pikachu is going up, and the mouse is already urinating on the bunch of squares in placing, there's no question as to how it will end. 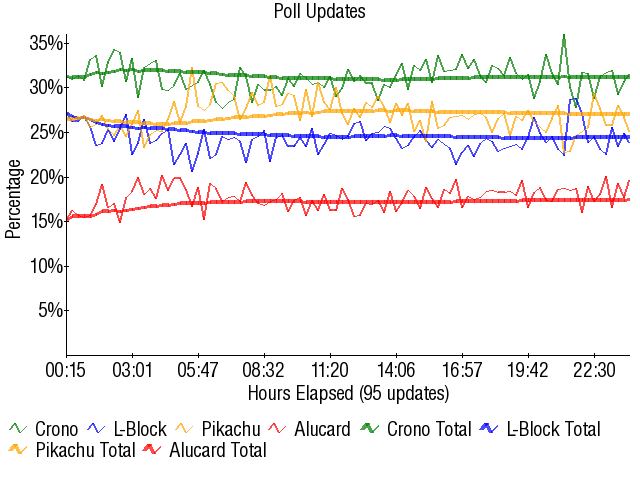 Oh well, at least I won't be able to continue killing my preds with bracket favoritism tonight, since I had Ryu advancing out of this one. Let's do a quick check to see if there's any real shot of killing off that L joke in the next 25 hours, shall we?

The Crono and Block numbers look okay, which makes sense since Ryu is Mr. Consistency, after all. The Pika/Aly stuff is way off due to Diablo hurting Arthas so badly last year, but eh, we should keep in mind that Pika wasn't going to look good in any numbers so far this season regardless thanks to Ike and then Falcon holding him back. The King of all Pokemon gets to unleash his full Nintendo potential tonight... but will it be enough?

Let's start with Alucard. I sure hope he amended his Plan for this season to mention getting bumped off in a match where he's never remotely in contention for getting out of the basement, because that's all he'll be able to accomplish here. Oh well, at least he increased his Contest stock this season by easily outclassing Arthas and going toe to toe with an LFFed Pikachu; he's a vet that's still well worth seeing in these brackets, so no shame in that.

Moving on to Crono, a guy I continue to gain confidence in every day. With Ryu out of the way and the older SNES-loving voters most likely swinging his way, I don't think the CT star should have any problem increasing his margin of victory over the Block. With the way Vincent dropped the ball today, I could easily see Crono impressing us enough tonight to set himself up as a slight favorite in the long-awaited R4 rematch between the Square stars. But will that rematch actually mean anything, or is L-Block going to rain on the parade and turn it into a "just for pride" third place battle?

That all depends on Pika riding Nintendo's recent wave of good performances to a second straight season of shocking bracket advancements. Can he do it? Short answer: no. Long answer: I give the electric rat a ton of credit in this format... he's been held back by Ike and Falcon and Luigi and triple RPG LFF, but the one time he was given free reign to flex his muscles he shocked the world by pounding Dante and Leon straight up. Part of that was his surely his classic R/B/Y sprite coming into play, but hey, he's once again rocking that baby in a few pics for tomorrow, so I'm certainly expecting to see a Pikachu closer to peak strength than we've ever seen since that infamous '07 result.

So why can't I pick him? For one, Alucard (like Ammy before him) is a legit character with a pretty diehard fanbase, so he isn't going to shrivel up and die tomorrow, which will leave fewer non-joke votes to go around for Crono and Pika. And for two, the match pictures for this round are ridic. A Tetris piece at a presidential debate, wearing a tie behind a podium? If that doesn't scream "lol support the joke vote!" I don't know what does. I think part of the reason for L's growing success in '07 was the internet rallying behind him as he went along, certainly, but that another significant portion of his strength came from looking so silly as the pictures got more dramatic. Like remember Mt. Rushmore, with the "faces" of Link/Cloud/Snake/L carved in? That's the kind of stuff that I'd imagine does a joke character wonders.

Alright, so with Crono looking good but L refusing to fold to Pika, while Alucard holds up decently well, we get something along the lines of... *stirs after potting for a bit*

Alright Nintendo, bet against you two days in a row... time to prove me right with another good showing today!

Yes. Yes. YES! The King is Dead! WCC can go right ahead and make it to the finals and kill off my bracket in the process and I wouldn't even mind at this point, because... what a fantastic result today! To get the Block knocked out at any time would have been great, but for it to happen like this, with another miracle third round result for The Little Rat that Could when we were once again all counting him out... just wow! By far the most pleased I've been with any result in many a year.

Retrieved from "https://board8.fandom.com/wiki/Crono_vs_L-Block_vs_Pikachu_vs_Alucard_2008?oldid=67873"
Community content is available under CC-BY-SA unless otherwise noted.