Of all the results that we had this year, none of them really have me going back and saying, "this should not have happened," like this one. There were bigger shocks, of course, but almost without exception there's an explanation, or at least a jaundiced eye and prism to look at the matches through. This thing may be underrated because no one cared about the participants involved, but in terms of "one and dones" it has a ton of not coincidental parallels with Grand Theft Auto/WarCraft.

Dante was the easy first in this match - there was a smattering of hype that he could break 50% in it, but that was mostly disregarded - with the second place slot supposed to easily go to Ramza. For those who don't know who Ramza is (and that appears to be a LOT of people these days), he's the protagonist of Final Fantasy Tactics. The same Final Fantasy Tactics that nearly beat - and many argue should have beaten - Metal Gear Solid in the Games Contest. Ramza himself didn't have quite the same luster, but in his sole contest outing in 2003 he put up 42% on Kirby. This was back when Kirby was worth 48% on Alucard, but with 2003 arguably being 'card's best year that's hardly shaming.

Well, five years had passed, and Ramza had returned. The big question mark was going to be how much he had deteriorated since his last and only contest outing, but he was up against the wimpiest of wimpy fodder - Hogger, a joke in WoW that only WoW fans get, and Laharl, who to this day has only finished above PS3-exclusive Nathan Hale in a contest match. It might be closer than expected, it might even be ugly, but despite a few WoW fanatics' ramblings Ramza was considered to be a gimme here.

So when the match started and Ramza was under 20%, everyone's alarms went off.

It's not just that Ramza was uncomfortably close to Hogger - he was an unknown and, hey, maybe a combination of joke factor and WoW power was going to make him worth something. But both of them were sandwiching between Laharl, who is some of the fodderiest fodder you'll ever see make multiple contests. As the night went on Ramza couldn't even build his lead consistently on Laharl, gains turned to stalls, and by morning the two had basically become dead even.

Unfortunately for the unsuspecting Ramza and Laharl slugging it out, Hogger had also managed to hang around within striking distance all night - and, as the day vote began his vote intake began to pretty much mirror that of the other two's (who knew the kiddies were so into pork these days?). Of course, in order to win Hogger would need to overtake the two, not just match them. That, of course, is the point where the singular entity of WoW actually mattered. Rallies were formed, the biggest MMO out there was alerted, and Hogger began to throw out vote spikes on a regular, if not consistent basis. There would be some stalling during the school vote, but after the ASV hit Hogger was ahead and stayed that way for the rest of the match. There was a final, crazy push for Ramza at the very end of the match (look at the updater to see how much so), and while he tore into Hogger at a ludicrous rate considering the votes that were coming in, it was too little, too late for it to matter in the end.

What was notable here was not the surprising strength of the upsetting character here, but how damn weak the favorite turned out to be. Just like GTA, Ramza was startlingly feeble, and while his weakness was easier to explain than GTA's, it was perhaps more stunning considering the caliber of his competition. We're talking about two LAHARL-level entities, and Ramza may very well have lost to Laharl here if he hadn't been counter-rallied against Hogger's push (to say nothing of brackets). Now, unlike GTA/WC, the format did play tricks here, and if you take Dante out of the picture to boil this down to a three-way Ramza's an easy call. But one just has to wonder how strong FFT even is today, and how much of that strength is derived out of nothing but franchise voting. It's not like there's much of an ensemble cast going on in that game or anything - Ramza is the clear main character, and the big fan-favorite doesn't even join until the game's halfway done.

I would have picked Cecil to have won here. I would have picked BARTZ, and he's never even been in a contest! I think I may have taken every non-optional FF6 character to win here. Ramza showed us exactly how pitiful a Final Fantasy character could actually be in these contests, and for that alone I will remember this match. 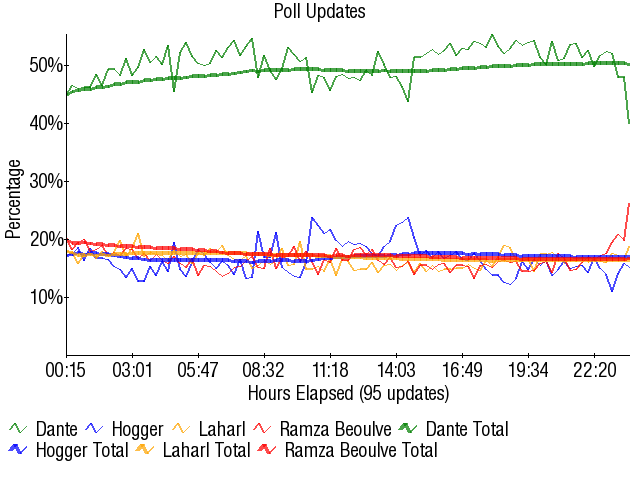 Enough nonsense- on to two of the more exciting battles of R1 in my opinion! First comes Hogger, and tomorrow, the Sandman strikes. Let's try to get a bead on this Dante poll to start.

Darn that SB and his slight delay before starting this Contest! This match should haven taken place yesterday or the day before- Blizzcon was just ending and Blizzard fans worldwide were hitting up all the fansites to get the latest info, while at the same time WoW players had no choice but to sit around bored downloading the 1.2 GB Wrath of the Lich King pre-patch and waiting for the servers to come back online. That 1 or 2 day delay could very well cost Hogger this match- Blizzard fans know all the big news already and won't be refreshing the fan pages, and WoW came back online about 5 hours ago and all the players are going to be too busy trying out the new content (I guess it was just about the most game-changing patch so far) for the next 48 hours to do anything silly like vote in popularity polls. What a shame! Well, for my bracket at least.

Ramza was the guy I bet against, and I thought I was doing so with good reason. That disastrous loss to Kirby back in '03 certainly left a bad taste in my mouth, but now that I go back and look, it wasn't THAT awful. Sure Kirby scored 57% on him, but Ramza actually ended with a very respectable 22 in those final stats; needless to say, it's pretty difficult to think of a scenario that would land Hogger a spot above the fodder line. Square's been hit (Squall, Sora) and miss (Kefka, Riku) so far this season, but that crazy performance by Kain must have me really feeling the FFFEAR right now, because all of a sudden I'm feeling surprisingly confident in picking against my bracket to take Ramza here.

As for the other two in the poll, what is there to say? Dante's a stud normally and even better in this format who should be blowing the rest of these chumps out, especially with that awesome pic. No way he pushes for 50% though like he did last year- these chumps aren't QUITE as chumpish as Ammy/Little Mac/Matt, plus anti-favoriteFAQs. Laharl is just really really bad and needs to stop making brackets. Still, he ought to improve on that nasty 11% value from '07, now that L-Block won't be ruining him.

Soooo I guess that means I'll be preding...

WAIT, HOLD THE PRESSES! A WoW-playing friend of mine from Europe just IMed me; he says that in Europe the pre-patch was 1.62 GB and that servers are still down while people install it, and that no servers on the continent will be back online for another 11 to 12 hours. Then I talked to an American WoWer, who said that he's been trying to log into his server every five minutes since 4pm today but that it's still down. He thinks most US servers will remain down overnight and probably many won't be back up until tomorrow morning.

All of a sudden those millions of bored WoW players are back on the menu! Could this be the perfect storm for offsite joke vote rallying? Exciting!

I'm going to have to change my pick to...

Yeah, still think Ramza's got too much in his favor to bet against here. That being said, would not be surprised at all if Hogger took him behind the woodshed tonight. This will be a very interesting first 15 minutes IMO!

Awwww yeah, what an awesome match today. Too bad that the Stats topic had to be ruined by people crying about rallying for 24 straight hours. Come on guys, its Blizzard, of course there's going to be outside voting if the end result is at all in question. If you want to be upset at someone, vent your frustration at Ramza and Laharl for looking so pathetic (and seemingly LFFing each other a bit) that they couldn't put away a minor character from a game only 31% of the site has played. To me, this is the kind of "joke" character that's actually enjoyable- Hogger's a weakling, but (assuming he holds on these last hours for the win) it was fun to watch him shake things up and snatch the win away from equally undeserving competition here in R1. BUT, there's no danger of him suddenly going all L-Block on us and ruining perfectly good matchups down the line with a dull static strength. In fact, he actually enhances R2, as now Riku will have a much better shot at equaling an LFF weakened Leon than he would have with Square/FF/RPG LFF in play. Hogger: Truly a joke we can all get behind!

Retrieved from "https://board8.fandom.com/wiki/Dante_vs_Hogger_vs_Laharl_vs_Ramza_Beoulve_2008?oldid=67861"
Community content is available under CC-BY-SA unless otherwise noted.