At a glance, it's inexplicable how Sub-Zero can be 7% behind Sonic in the first round and more than 20% behind him a round later.

But that's because people forgot when Brawl's hype was in full swing. Remember this video? http://www.youtube.com/watch?v=a3-HMoqZgzU

That video was uploaded October 10th, this match happened on October 20th. I'm sure the trailer was maybe released a day or two prior on the DOJO!, but you get the point. That video honestly pisses me off, because I remember being so hyped for that damn game. Brawl being awful is seriously the biggest gaming crime ever, right up there with E.T. for the Atari and the controls in Shadow of the Colossus. I will never forgive those people unless the next Smash is beyond godlike, Unreal Tournament style.

But to the point, that's why Sonic did so well here. Hype does a lot more for characters than actual games do sometimes. As for how Duke beat Gordon and then Gordon turned around to beat him by almost 6%, who knows and who cares. Last place characters are not worth talking about.

Easy endings to rounds are cool, because I get to reflect a bit. Oftentimes, round 2 is the worst round of any contest. Since the LOL X-Stats, check out the genuine surprises we've seen in round 2 all the way through this contest:


That's it, and three of those are due to massive round 1 upsets where the winner also won in the second round. Even with this contest, the only round 2 surprise without a plausible explanation is Riku beating Ryu Hayabusa and that didn't matter in the long run anyway. Mostly everything else we either saw coming in advance or the explanation is easy.

Extrapolated standings have killed all the unpredictability in these contests.

this match was interesting because you never get to see a rematch -- Sonic vs. Sub-Zero, round 2. would the results be the same? would they be wildly different?

all of that got thrown out when Sonic got announced for Brawl. now, this match was about measuring something totally different -- hype. we got to see Sonic pre-crisis and post-crisis here, and it was time to see how much of a difference Brawl made. at first glance, it looks like it made a ton - Sonic crushed Sub-Zero this time, nearly doubling him up and getting a higher percentage against arguably a better field.

but on closer inspection, Sub-Zero ended up being close to Gordon Freeman. yeah, the Orange Box had just come out, but that doesn't explain how a guy that got close to Sonic ended up close to Gordon friggin' Freeman. what conclusions could you draw here? pretty much nothing, because it made no freaking sense. Sonic was still an unknown, and it was hard to tell which match was the anomaly -- the first Sonic/Sub-Zero match or the second.

oh yeah, and yet another weird aspect to this match: Duke Nukem got crushed by Freeman this time after a close match in round 1. this whole match just made no sense. it wasn't close or interesting to watch, but the results make you go "...huh?" 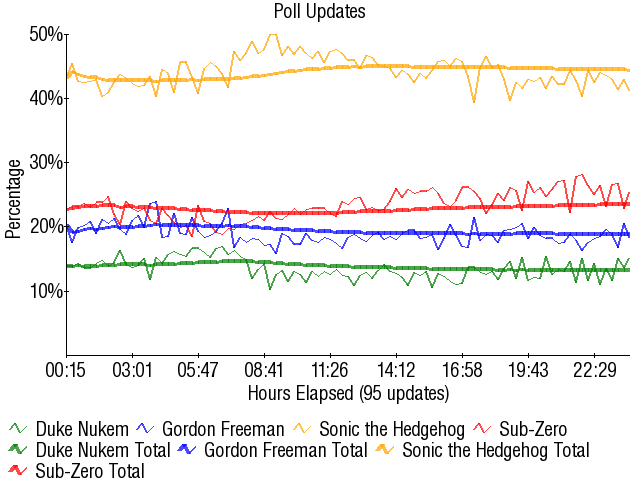 Retrieved from "https://board8.fandom.com/wiki/Duke_Nukem_vs_Gordon_Freeman_vs_Sonic_the_Hedgehog_vs_Sub-Zero_2007?oldid=66620"
Community content is available under CC-BY-SA unless otherwise noted.