Okay, so the order of the winners was never in question. Vincent Valentine had beaten Crono in the previous year, while Falco was Brawl character #4827. As much as BrawlFEAR had the capacity to succeed it was never going to put Falco over Vincent, and as much as it had the potential to fail there were two pieces of fodder beneath them. Or so we thought.

The end result here is a match where aside from one character, they ALL looked bad. Vincent didn't get nearly the number that some though he could score (thus putting him as the next in a long line of underperfoming obvious winners this round), Wander sucked to an even greater degree than people thought possible, and while one might be tempted to commend Falco's performance, there was a little problem there...

...specifically, letting GlaDOS get 43% on you.

GlaDOS was fodder. FODDER. Portal was a beloved, but niche addition to The Orange Box. And honestly, with the joke and Portal fanboyism votes, we could have easily seen a performance like this come from Weighted Companion Cube. But GlaDOS? I'm stunned that 20% of GameFAQs even knew her name, which isn't given in the course of the whole game. More than that, her picture is wholly unrecognizable, there's virtually no context clues there... honestly, this might be the most befuddling result of the whole contest to me. How does GlaDOS win updates against Falco? What does Portal do in a contest if this is legit?

One thing was pretty certain - Tidus and DK were in for a whole world of hurt after this. A stronger entry from Portal powered up with joke votes was a deadly force indeed. 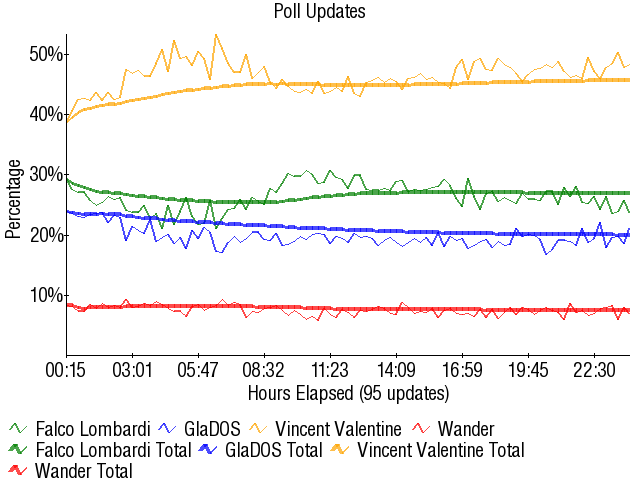 Not an awful match, but don't see it being all that intense either. I never bought into the hype for GlaDOS being anything more than fun fodder that it would be worth a laugh to see in an official match pic (and there's certainly going to be plenty laughing tonight, it looks like!), so I'd be shocked if Falco is ever challenged beyond the first five minutes. Probably the best thing to keep an eye on here will be Vincent- he took down Crono without too much trouble last season, but with CT back on the upswing (maybe?) and there not being "a Link in the way" this time around, he still needs to put up solid numbers these first two rounds to cement his favorite status for that rematch.

Wander looked awful in the match pic, performed awfully during the entire 24 hours of the poll, and finished up in an awful position on the final x-stats. Mario/Boss/Pac had no reason to LFF Wander; he's just legitimately one of the weakest characters we've even seen in a poll. And yet we brought him back? *shakes head sadly*

I'm pretty excited to see what Falco will be capable of here. SF didn't make the Game or Series Contests and Fox always gets placed in unwinnable positions, so this will pretty much be our first chance to see what the series is worth when given a fair shot. I think he's going to surprise some people by looking decent here, which would do wonders for me in terms of creating confidence in that crazy Fox > Sora upset I took in my bracket! GlaDOS... meh. I have a ton of respect for Portal and love Still Alive as much as anyone, but I knew she was going to look "like THAT" in the match pic which made my Falco pick an easy decision. Really happy to see her given a shot, but sadly it seems a given that WCC's going to be outdoing her by a healthy margin this season.

As for Vincent, I think he's in much the same position as Samus and Ganon the last two days. Obviously isn't going to be in any way threatened, but how he ends up could still be a strong indication as to where Square/Final Fantasy will be sitting here in 2008. Zack and Zidane seemed to point to something of a FF boost, but then Kefka bombed out and left us wondering. A big time performance for VV here would set alot of fears at rest in the Square camp, I'd have to think.

Mmm... if that were a cake, it'd be both delicious and truthful!

...holy smokes! Maybe it's unfair to call this a true "bombing" for Vincent, since even though I expected 50% from him some of that can be explained by GlaDOS eating up more percentage than we thought. But there's no way to discount what a great showing Falco is having here- I always thought he and Fox would have some serious power if they could stop drawing Nintendo opponents. Bring on Sora v Fox!

Retrieved from "https://board8.fandom.com/wiki/Falco_Lombardi_vs_GLaDOS_vs_Vincent_Valentine_vs_Wander_2008?oldid=63233"
Community content is available under CC-BY-SA unless otherwise noted.