It's hard to believe it now, but despite the epic Sonic bombing last year - which consisted of Sonic nearly losing to Squall twice, Tails losing to The Boss, and Knuckles needing VAAN to hold off Rikku - Knuckles was actually a tentative favorite to advance with Mario in this match. And even though Shadow had brought Sonic Team failure to new levels of epic, the tight Oracle spread between Knuckles and Zelda reveals how much the board still believed in him. The question, of course, was... why?

Because IT'S FREAKING MARIO! was in the match, of course. This was Mario, who had beat down Samus more brutally than Link had - and Samus was supposed to be a character that was much STRONGER than the plumber. Mario, a character powerful enough to look like he was SFFing characters like Zero, a character that could actually stand up to Link and make Sephiroth look good with the board vote against him. Meanwhile, Zelda was a name-driven character that no one but the biggest of the 'drones actually LIKED, and even the majority of those would fold in the face of IT'S FREAKING MARIO! Sure, there was Zelda's power performance on Samus in 2k6 to think about, but that was the (lol) female bracket at work... and besides, that was Samus, Queen of SFFailure. She couldn't significantly SFF the leech Ganondorf, so obviously Zelda was going to fare better.

Yeah, uh huh. Like so many other debated matches, it wasn't even close. Zelda was making not one, but TWO characters look pitiful from the get-go. Yes, there was Knuckles, who even his most ardent supporters had been half-expecting to fail. But then there was MARIO, who couldn't seem to score any significant SFF on Zelda either! Based on 2005 stats, which should be even more favorable to Zelda seeing as how she had to go out against an even more dreadful looking Snake than usual, Mario gets 61% on the princess. So what does he go and do in this match? Barely get 62%. What the...?

Make no mistake - if Mario had actually gone and, y'know, SFFED Zelda like he was supposed to, this could have been a match. And while you can partially chalk this up to Zelda's resilience even in the face of overpowering strength - seriously, LoZ's 43%+ on SMB3 is a damn tragedy - I hold that this was the first sign we had that this Mario of new was not the Mario of old. Can you imagine Mario 2k5 scoring barely more on Zelda than SAMUS? And ironically, Knuckles would probably be the Sonic character to come out looking best in all of this after the later rounds - 4% away from Zelda when you're probably being SFFed too, if not even worse, ain't too shabby, though you've got to figure some bracket support figures into that. 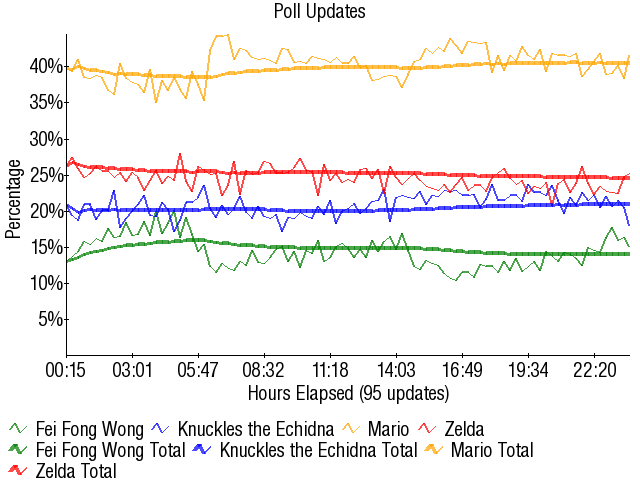 Today should be a great opportunity to see something surprising- from the moment the bracket was released this was one of the polls that drew the most attention, and even weeks later we've yet to draw any true consensus. 111 Gurus picked Knuckles, but on the other hand a full 100 went with Zelda... a ton of brackets will be taking a hit here, but which ones? WHICH?

Maybe the numbers can help us decide!

First off, let's assign Fei a 15ish or something so we can forget he exists. The guy's far from the worst character to have made the bracket, but the rest of this poll is just too interesting to dwell on his presence. Mario really impressed me last season- he held up much better than expected against Link, and even managed to look fairly decent against Sephiroth, despite Fox being there to hold him back by over 5%. Obviously he won't need to show up at his full 42 percent strength tonight to walk away with a win, but how strong he is SHOULD have a pretty big impact on the end result regardless. That's because...

Zelda disappointed pretty badly in '07. She came in hot off a great showing on Samus back in 2006 and should have been performing at peak strength, what with TP recently released and Brawl hype continuing to mount. That why many people, myself included, went out on a limb and took her to upset Vincent in the first round- boy did that backfire! What she proved instead was that plenty of her support comes from her name and her Nintendo flagship affiliation, and when you give people other options they'll abandon her at a moment's notice. And then the second round proved that she gets in especially big trouble as soon as you introduce someone higher on the N totem pole into her group. Which should make the second place result in this one obvious here, right? But wait a minute!

To be frank, Knuckles didn't exactly set the world on fire last Summer either. Despite having no excuse to not perform at full strength in R1, he was never in contention against Yoshi and furthermore would almost certainly have been knocked out of the Contest by Rikku if not for Vaan holding her back. Seriously, Rikku? That's pretty embarrassing for a guy who only a couple years before had nearly gone toe to toe with Squall! Clearly Sonic Team loses a step when moving to the four way format. When you add to that how badly Link destroyed Shadow just a few days back, it seems hard to deny that Mario's going to be holding Knuckles down in this one. But will he be able to hurt Knux more than he does Zelda?

My answer there is... no, Zelda probably gets hurt a little worse. Fortunately, she's also a little bit stronger naturally; I'm banking on that slight advantage being enough to see her through in what should be the closest 2/3 result of the season so far! I don't do so with a ton of confidence, but heck, this one is basically a coin flip in my eyes, and when it comes down to a coin flip you never bet on Tails. ...or Shadow. Or Knuckles.

Let's throw these all into the pot, flip in a few coins, stir well, and...

Whoops! Guess this won't be the closest #2 vs #3 result so far... or even all that close. I guess that's in line with Link hurting Shadow so badly, but at this point you've really got to start calling Sonic Team as a whole into question. I know this much- certainly feeling better about that Master Chief > Sonic upset than I was a week back!

Retrieved from "https://board8.fandom.com/wiki/Fei_Fong_Wong_vs_Knuckles_the_Echidna_vs_Mario_vs_Zelda_2008?oldid=67846"
Community content is available under CC-BY-SA unless otherwise noted.